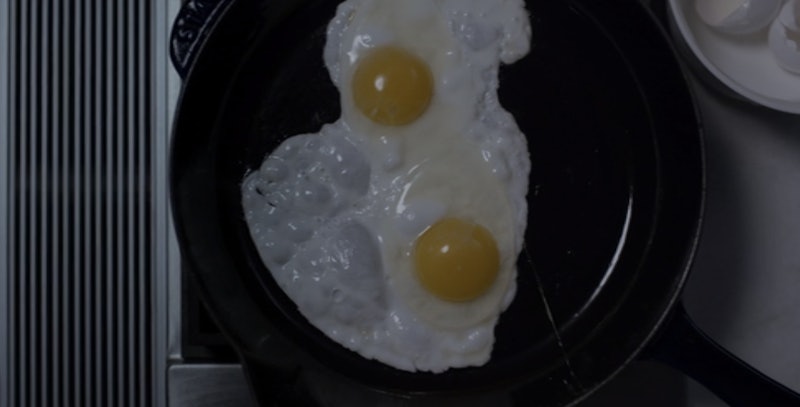 There was a whole lot of egg talk in the second episode of House of Cards Season 3, much of it centered around a set of commemorative White House eggs which, believe it or not, are totally real. And the fact that First Lady Claire is stuck picking out egg colors while her husband is busy "trying to balance an egg" in the White House couldn't be a more perfect use of this strange tradition. It's also why Claire's late night breakfast-ish snack at the very end of the episode so damn satisfying: Claire is quite literally frying up tradition and forging her own path.

In Claire's initial egg meeting, the scene is fraught with frustration. Claire has lost her bid for UN Ambassador and she's staring down the barrel of selecting egg colors for the rest of her First Ladyship. And when the woman she's working with suggests that Claire pick a pink egg because "women like pink," I could have leapt into the screen and high fived Claire for looking at her like a bug to be crushed. Women aren't supposed to like pink no more than First Ladies are just supposed to stand by and plan teas and pick out eggs while their husbands run the country. Get it, Claire.

When Claire later tells the egg woman that she's forgoing the pink and opting for red, the color of blood, we know that not only is Claire done with this nonsense, but she's not done with her loftier ambitions. And thank God for that.

And while this is probably the most attention I'll ever pay to some eggs, this is also the most satisfying hour of obsessing over breakfast food that we'll ever see.