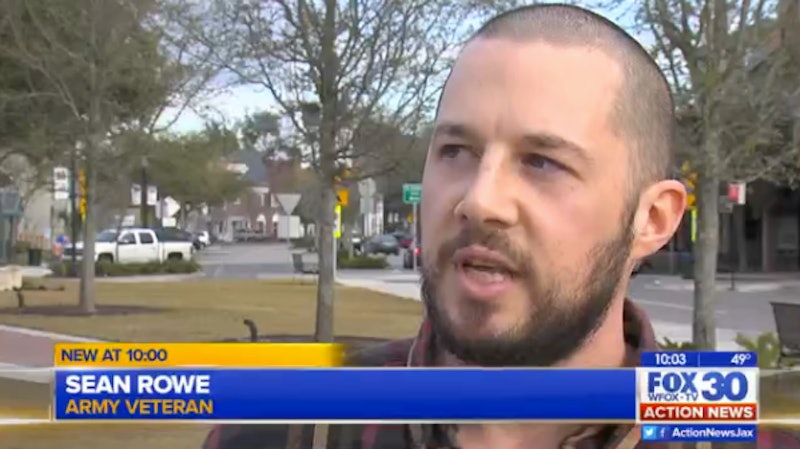 The U.S. has formed a coalition of some 60 countries and is spending roughly $300,000 an hour to fight ISIS, but for one Florida man, that's just not enough. Army veteran Sean Rowe formed Veterans Against ISIS, his own anti-ISIS coalition, on Wednesday. Rowe has also reportedly launched a website in order to raise funds and recruit other vets for his makeshift army. So far, he is the only member, but he's hoping that other like-minded individuals with military experience will join him in his grassroots cause. If history is any indication, mercenaries have proven to be effective, but given the current situation with ISIS, Rowe might be better off rejoining the Army.

On the same day that Abror Habibov was arrested in Jacksonville, Florida, for organizing and funding two men in their plot to join ISIS, local resident Rowe, who is an eight-year Army vet, hatched his own plot. While an alarming number of people around the world have volunteered to join ISIS's cause, Rowe might be the first volunteer looking to travel to Syria and fight against them. In an email statement to Jacksonville's Action News, Rowe wrote:

Our mission is to raise funds and personnel to deploy against ISIS.

Rowe also spoke to Action News about this mission, explaining that he's fed up with what ISIS is doing.

We're tired of seeing what’s going on, and it doesn’t look like anything is being done.

It's not clear who "we" is referring to, but he's presumably speaking on behalf of other military veterans in the U.S. As for the latter part of his statement, that's not really accurate, since the ongoing fight against ISIS currently includes airstrike campaigns orchestrated by multiple countries and ground combat coordination with Kurdish troops, with the possibility of U.S. ground troops in the near future. That's not exactly nothing.

But despite these efforts, ISIS has been able to continue taking hostages and releasing horrific videos of their beheadings. So Rowe is determined to take matters into his own hands, and he's not doing it for glory, fame, or profit. He told Action News:

These guys are slaughtering and beheading people. We’re going over there to stop that; it’s not about the money.

But is traveling into the heart of ISIS-controlled territories as a nonprofit mercenary a good idea? As history has shown, guerrilla-style warfare can be effective. Mercenaries have been employed all over the world since ancient times. The Varangian Guard were an autonomous unit of Viking warriors who protected the emperor during the Byzantine empire. During the 13th century, Italian vets returning from the Crusades took up mercenary work because it was extremely lucrative. More recently, the U.S.-formed Flying Tigers were a group of Air Force fighter pilots who fought alongside the Chinese against Japan in WWII. The unit succeeded in destroying 296 Japanese aircraft and more than 1,300 riverboats.

And even more recently, three U.S. citizens traveled to Syria to fight ISIS by joining the Kurdish People's Protection Units. It's not clear whether Rowe has considered aligning with existent ground troops, but it would certainly be more practical than going at it alone.

Even if Rowe is able to recruit enough members to form a solid unit, he'd be taking a colossal risk, without question. According to experts, ISIS has anywhere between 20,000 and 200,000 fighters. It's safe to assume that Rowe and his crew would be outnumbered. As of press time, Rowe was still the only member of Veterans Against ISIS, but that's just a minor detail to him. He told Action News:

I'll be surprised if anyone is actually crazy enough to go on this first mission. If I have to go alone that's fine.

We admire your gumption, Rowe, but we hope you think this through before you take off for Syria.Images: