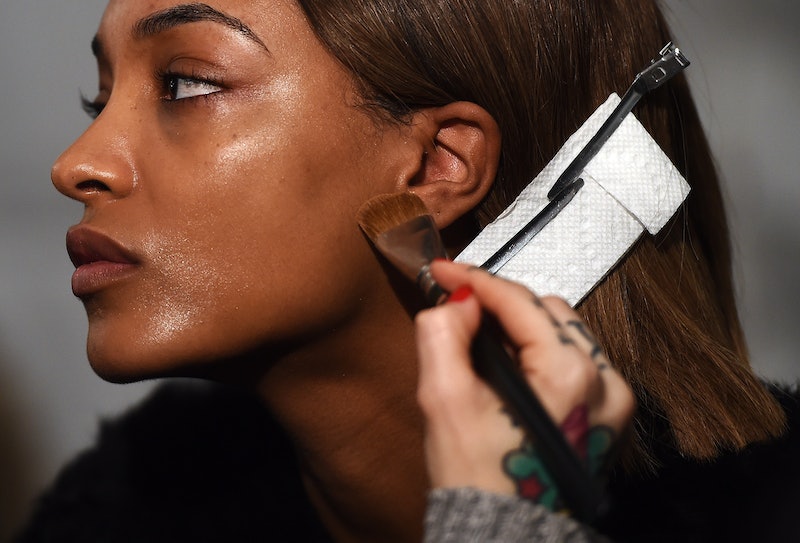 Any beauty devotee has the best intentions of experimenting with complex coifs and setting aside more than five minutes to play with a curling iron per day, but life rarely runs according to schedule. If you hit the snooze button too many times on your iPhone alarm or fumble over the French press, your styling time is suddenly gone in the blink of a sleep-deprived eye. Designers appeared to have this frenetic pace in mind when they called in stylists to fashion hairstyles for their Fall 2015 Fashion Week runways. The average runway hairdo was high in style but low maintenance, a key mixture of innovation and ease that any harried girl on the go could easily accomplish in mere minutes, sans supervision.

A handful of designers, lead by the venerable Marc Jacobs, chose slick, separated locks, while offbeat ponytails ruled at Prada and mussed buns took center stage at Diane von Furstenberg. While the styles themselves varied considerably, the common denominator was deliberate imperfection. Buns weren't locked in place with excessive hairspray, long locks had a bit of bend to the ends, and the suggestion of greasy hair even made an appearance — though attempting the trend in the workplace would be unwise. Here are the five most stylish, simple hairstyles to hit Fashion Week, and how to achieve them in five minutes or less.

Perhaps the most insouciant style at Milan Fashion Week, Prada's pinned ponytail is also one of the least complicated to accomplish. Simply sweep hair into a high ponytail at the crown of the head, leaving one half-inch segment free. Secure the ponytail, and wrap the one-inch section around the base of the tail before pinning the ends with bejeweled clips just above the ear. Hairstylist Guido Palau explained to Style.com that his secret weapon was a helping of Redken’s Stay High, which Palau utilized on damp locks before giving models a blowout.

Created by stylist Orlando Pita, the tousled, piecey buns at Diane von Furstenberg were the ideal nonchalant style for a career-minded woman with places to be other than her salon. Pita related to Women's Wear Daily that the buns were fashioned using Tresemmé Blow Dry Balm as a blowdry base and Perfectly Undone Hairspray to give the look staying power. There was a notable absence of difficult stylistic tricks or hidden bun enhancers, as Pita's only accessory was a humble hair tie to keep the knot in place between the nape of the neck and crown of the head. What could be simpler than that?

If the last thing you wish to do after giving your locks a once-over with the blowdryer is to continue styling, Tommy Hilfiger's natural, unfussy blowout may be your go-to 'do for 2015. Hair guru Eugene Souleiman insisted to Women's Wear Daily that the glossy, relaxed locks at Hilfiger's show were fashioned with a hairdryer, water, and clips to keep hair tucked behind models' ears. To achieve the look at home, try prepping wet locks with a drop or two of oil and rough-drying locks, allowing your hair's natural texture to shine through.

Burberry's artfully mussed waves were both romantic and completely within reach thanks to the efforts of hair tamer Christiaan. Christiaan explained to Vogue that the Burberry style utilized only two products, a combination of Bumble & bumble Prep Spray and Oribe’s Dry Texturizing Spray to create the ethereal look. To achieve the look, first blow dry hair using a medium barrel round brush. After misting locks with your styling spray of choice, use a one and a half-inch curling iron to build a series of uneven curls around the head, and pin in place to set before finger-combing and adding texturizer.

If you have a thing for simple hairstyles and anything reminiscent of decades past, Derek Lam's low ponytail is your style, encapsulated. Yet another Orlando Pita feat, the low, refined ponytail was meant to evoke a modernized '70s style, Vogue reports. Phyto Phytovolume Actif Volumizing Spray and Phyto Phytolaque Soie Hairspray were Pita's tools of choice when building the simple ponytail, but the key ingredient was a leather ponytail wrap. Steal the look by smoothing damp hair with a blowdryer and positioning your part over the arch of your eyebrow before combing the look into an imperfect ponytail at the nape of the neck.