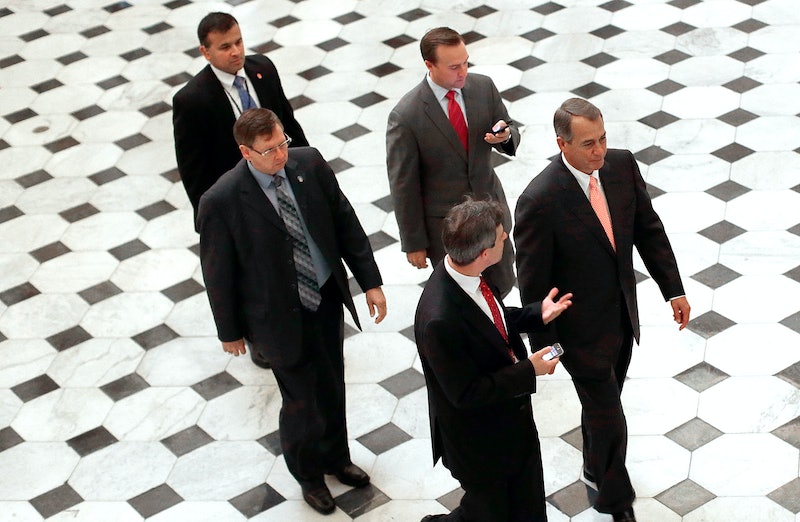 President Barack Obama met with Congressional Republicans in the White House yesterday, but it's not yet clear what the ultimate result of the meeting will be. Politico reports that the two groups "clashed" despite an offer by Republicans to raise the debt ceiling for six weeks. The Republicans also said they could reopen the government by early next week, but would continue to negotiate additional cutbacks in a government funding bill.

The offer didn't entirely win over the president, who has been insistent throughout the government shutdown about making sure this incident breaks the Republicans' bad habit of holding important legislation hostage until they get concessions. The president, according to a senior aide, neither accepted nor rejected their offer. "After a discussion about potential paths forward, no specific determination was made," a White House Statement said.

But House majority leader Eric Cantor called the meeting "very useful." "It was clarifying I think for both sides as to where we are and the takeaway from the meeting was, our teams are going to be talking further tonight, we’ll have more discussion, we’ll come back to have more discussion," he said. "The president said that he would go and consult with the administration folks and hopefully we can see a way forward after that."

In the Senate, GOP leaders are supposedly floating around ideas about raising the debt ceiling and reopening the government in exchange for concessions like means testing for Obamacare subsidies or a repeal of the medical device tax. Earlier this week, Democratic leaders asked for just a few weeks of extensions on government funding and the debt ceiling, to buy time to work out a deal.

"The good news is that Republicans have accepted the principle that they’re not going to attach conditions to the debt ceiling,” said Democratic Congressman Chris Van Hollen, quickly adding that the "bad news" is that their compromise only extends the ceiling for a few weeks, "which will continue to generate huge amounts of destructive uncertainty in the economy."

"And, of course, they also continue to keep the government shut down,” he added.

The president had previously said that bargaining with Republicans is "a negotiation in theory, but in fact, basically, Democrats give a lot of concessions to Republicans, Republicans don’t give anything, and that’s dubbed as compromise," and warned that "extortion" can't become routine. On Thursday, officials reiterated that the government will have to reopen, and the debt ceiling will have to be lifted, before the president would participate in negotiations about spending cuts.

The renewed talks gave the impression that the U.S. is less likely to now default on its debt on Oct. 17, and the Dow Jones closed out the day on a high note. Washington Democrats, meanwhile, ended the day with more questions than answers on what proposals the GOP would be able to get a consensus behind. "We will wait until they hand us something that represents either what they can pass in the House or what they can agree to in the House," said Senate Majority Whip Dick Durbin after rhetorically asking what the Republican proposal actually was.

Meanwhile, the Republican Party's approval rating hit a staggeringly low 28 percent, the Gallup Poll announced on Thursday — and that's the lowest favorable ranking either party has had since Gallup started asking the question more than 20 years ago. The kicker is that Republicans themselves are more likely to view their party unfavorably than Democrats are to view the Democratic party unfavorably. This means the schism between the small-government-fiscal-conservative segment of the party and the Tea Party wing is getting bigger and bigger.

It's starting to sound like a tired joke: the president, GOP leadership, and anonymous sources walk into a negotiation room...