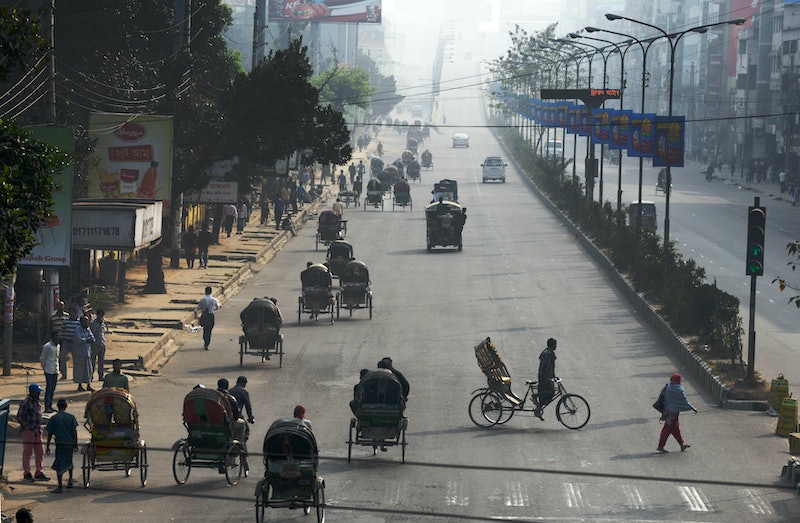 Religious hardliners once more resorted to violence in Dhaka, Bangladesh, where they killed Avijit Roy, an atheist Bangladeshi-American writer who promoted secularism and was a strong critic of religious extremism, police said on Friday. In a chronology of sickening events, Roy, 47, was leaving a book fair with his wife on Thursday evening in a bicycle rickshaw when two machete-wielding assailants stopped the vehicle, dragged the couple onto a sidewalk, and proceeded to strike them. A photographer at a local agency Jibon Ahmed said that he heard screams outside the fair around 9 p.m., and after finding the couple, he said he brought them to the hospital, where Roy died. His wife, Rafida Ahmed Bonya, suffered a blow to the head and is currently in critical condition. Local police chief Sirajul Islam told AFP:

He died as he was brought to the hospital. His wife was also seriously wounded. She has lost a finger.

Roy's family said that he had received threats for his articles that advocated secular beliefs, science and social issues. No one has claimed responsibility for the attack, and no arrests have been made yet, but police say there is an ongoing investigation into a local Islamist group that praised the killing, the BBC reported.

According to AFP, protests erupted in Dhaka as hundreds of people, enraged at the violence, chanted “we want justice” and “raise your voice against militants." Fellow writers and publishers also came out strongly against the murder, bemoaning the country's growing religious conservatism and intolerance. Imran Sarker, the head of the Bangladesh bloggers’ association, condemned the murder and held that the protests would continue until justice was served. He told the news wire:

Avijit’s killing once again proved that there is a culture of impunity in the country. The government must arrest the killers in 24 hours or face non-stop protests.

Roy's tragic death is not the first time a prominent atheist has been killed in the country. In 2013, another secular blogger, Ahmed Rajib Haider was similarly hacked to death by members of an obscure Islamist militant organization, triggering huge nationwide protests by secular activists. Bangladeshi blogger Parvez Alam told The New York Times that proponents of different beliefs were frequently a target of such attacks. In a phone call, he said:

This has been going on in Bangladesh. The bloggers have different religious viewpoints and we’re being attacked again and again, and we’re not getting justice.

A U.S. citizen and resident himself, Roy and his wife were visiting the Bangladeshi capital only to attend the book fair. As a prolific writer, he frequently published articles on his Bengali-language blog, Mukto-Mona, or Free Mind, and on the website of the Center for Inquiry, a U.S.-based organization dedicated to humanism and critiques of religion. Following the news of his death, the Center for Inquiry released a statement mourning the loss of their friend and ally, and urged the Bangladeshi authorities to seek justice. The statement read:

Dr. Roy was a true ally, a courageous and eloquent defender of reason, science, and free expression, in a country where those values have been under heavy attack.

The Center for Inquiry urges the authorities of Dhaka and Bangladesh to thoroughly investigate this crime and bring the perpetrators to justice. While it is not known for certain what motivated this attack, surely this tragedy must spur a serious discussion among officials in Bangladesh about free expression, and the roots of the kind of violent extremism that would so brutally take away such a valued member of its society.