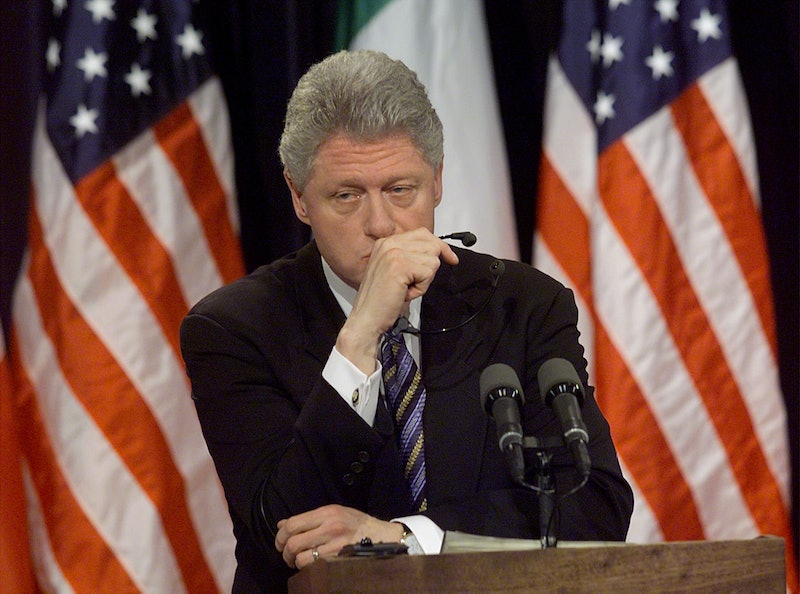 Well, that was one crazy night. We'll all remember it as the Great Dress Fiasco of 2015, that single, solitary night when the whole internet was focused on figuring out the color of a poorly photographed (blue and black) dress. I've personally run the gamut; after about eight hours of seeing white and gold, my perception has now flipped. It's the most-discussed blue dress in decades — but do you remember the last one? The blue and black dress channels Monica Lewinsky's dress nearly 20 years after the Clinton sex scandal, and it's kinda fun.

Of course, let's not be silly about this: there are a lot of things the two garments don't have in common. For example, the blue and black dress pictured above has probably never been exposed to Presidential semen. But with both items now firmly etched into different parts of America's history — the weighty political side of things, and the fondly recalled explosion of popular culture — there are a few comparisons we can draw. Here are five ways the blue and black dress makes us think of Monica and her awkwardly stained garment — and, yes, it's definitely blue and black, everyone.

1. They Both Embroiled The Nation In Speculation

In 1996, when Lewinsky confided to her friend and co-worker Linda Tripp that she had a blue dress still marked by a semen stain from an Oval Office affair with President Clinton, she inadvertently set in motion one of the pivotal stories that nearly cost him the presidency, Suddenly, everyone's obnoxious coworker had instant water cooler talk, while every late night talk show host had a slew of easy, cheap, hacky jokes to tell.

Nowadays, thanks to the increased role the internet plays in fueling scandal, it's impossible to say how Lewinsky's devalued dress would be received. But this much is clear — If she'd just taken a poorly lit photo of it, it's possible that only about one-fourth of people would believe all this "blue dress" nonsense.

2. They Both Belong In A Museum

The blue and black dress, on the other hand, has been immortalized in that great, intangible museum of internet crazes. And while it might be a let-down to see it in the flesh, and realize how frustratingly, overtly blue and black it is, it'd still be the ultimate conversation piece. After all, the truth matters. Wouldn't it be bet to confront its true blueness head-on, rather than live in denial?

3. They're Both Pretty Ugly Dresses

Sorry to rain on the fashion parade of someone I don't even know, but neither Lewinsky nor the hitherto unnamed wearer of the blue and black dress were exactly crushing it with the fashion. In all available photos (admittedly unflattering), Lewinsky's old dress looks, quite frankly, a bit like a bathrobe. And beyond the chromatic confusion, the blue and black dress is a bit of a mess.

4. They'll Both Go Down As Dark Horse Halloween Costume Candidates

The 90s have come and gone, and with it, the glut of topical references that the country was mired in. Nowadays, wearing a blue dress on Halloween with a... peculiar stain on it might not register with observers. More likely than not, you'd be seen as lacking in the hygiene department. But back during the Clinton scandal's height, you could definitely win some attention with a Lewinsky dress outfit — assuming you weren't shy about implied semen in your holiday celebrations, that is.

As for the blue and black dress, I'm willing to bet we'll see a lot of them come this October — as Mashable notes, the very dress itself is available online, all for the low, low price of... $77? Yikes.

5. They Could Both Bring Down A Sitting President

I, for one, will not be satisfied until I know completely and fully whether President Obama saw white/gold, or blue/black. Frankly, I regard this as a question of presidential ethics and dignity every bit as compelling as a sex scandal — we need to know we've got a clear head situated in the Oval Office! A pair of sharp eyes behind the wheel. So, what is it, Mr. President? Blue and black or white and gold? Just remember, the correct answer is the less-popular one.