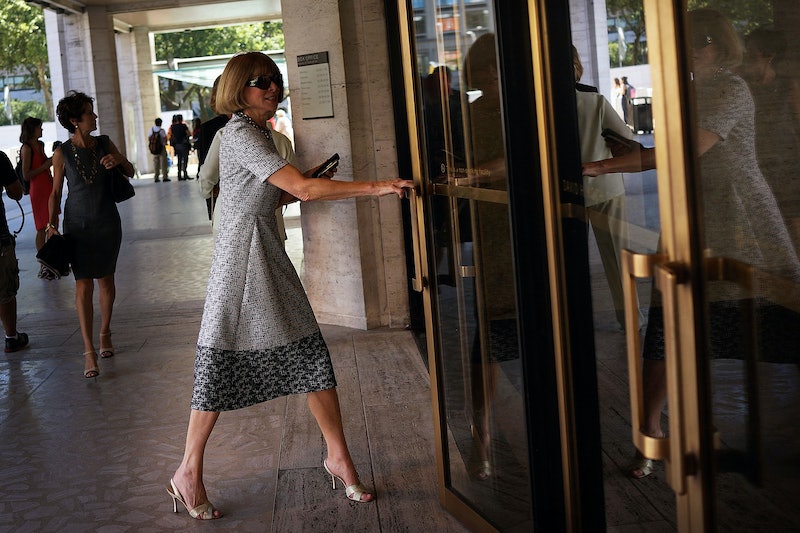 Forget rats, the glamorous fashionistas at 1 World Trade Center are facing a brand new problem: popcorn. Yes, really. The new Vogue offices allegedly smell like popcorn. According to New York Post, everyday around 4 p.m. an anonymous individual pops a bag of popcorn and the smell wafts through the entire office, clinging to the precious couture in the fashion closet and offending the magazine's well-heeled staffers.

"Given the current rat problem, and the fact that it is Vogue, you would think people would be smarter and wait to munch on buttered popcorn until they can take their Manolos off at home,” a source told the Post.

The fashion bible has had a difficult transition from 4 Times Square to the 1 World Trade Center. First the rats, which reportedly, kept Wintour from stepping into their new offices, and now freezing temps and the smell of food. Racked reports that Vogue is temporarily sharing two floors and a kitchen with Architectural Digest.

"People make popcorn and barbecued food. There are high-end clothes and clients coming in. We don’t want it to smell like food," the Vogue source told the New York Post.

The Condé Nast Cafeteria opened earlier this month, which will hopefully remedy the problem. I do feel bad for the staff. It is difficult to concentrate with strong smells of food constantly interrupting your focus, especially pungent smells. And they do have clothes in the fashion closet that I only dream about. But still... it's popcorn. I can think of some way worse smells for Anna Wintour and the like to deal with.

1. The Actual Feet That Go Into The Jimmy Choos

I've actually thought about this a lot. When magazines, laden with glorious fashion closets, lend their shoes out to celebrities for photoshoots, meet-and-greets, etc., do the shoes get cleaned afterwards? After so many people wear the stilettos, how does a smell not just develop in there?

People have complained about seeing the rat droppings and some gnawing marks left on the couture dresses, but the rat infestation doesn't seem to be causing much of a literal stink. That would be way less pleasant than freshly popped corn.

You know there has got to be at least one Vogue editor who has a fear of elevators (like me) or just prefers to take the stairs because, health or whatever. But the offices are on the 25th and 26th floor. If anyone does take the stairs, they have to look (and smell) like me after 10 minutes on the stair stepper.

Such a high-fashion minded office has got to have it's fair share of perfume lying around/being worn by every single staffer. While Chanel No. 5 smells like a glimpse of heaven, pair it with Britney Spears' Fantasy and Vogue might just have to fumigate.

I don't wish this upon anyone, but let's not forget Vogue is in a very new office. And so far, it hasn't seemed that clean. In an effort to keep the rats and whatever else kind of rodents away, lots of cleaning may be going on. While I love the smell of Lemon Pledge, too much of various kinds of cleaning supplies used all at once could have dangerous outcomes.