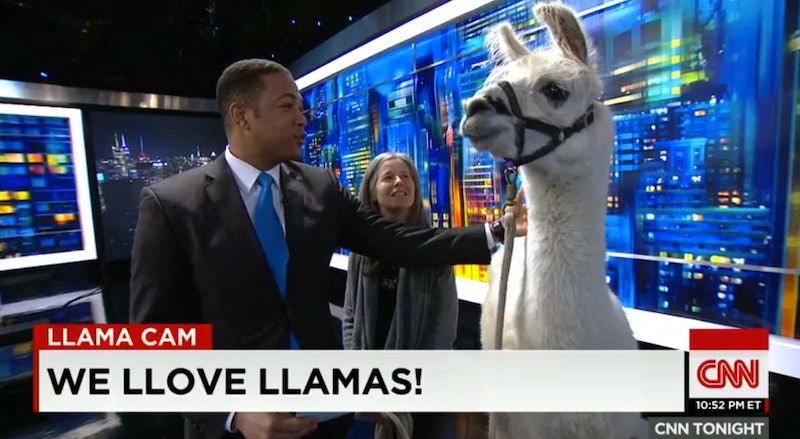 On Thursday, one of the most harrowing police chases in history went down in Sun City, Arizona. Two renegade llamas escaped from their owner when visiting a retirement facility and ended up running through the streets for an hour, driving law enforcement to the brink of insanity, before being caught. Once known as that funny-looking creature that looks even funnier when shaved, the noble llama has been catapulted by this into the national spotlight. In addition to inspiring a Twitter account, the rogue llamas have inspired CNN's Don Lemon to interview Pierre, the celebrity llama, on live television. It's your time to shine, llamas, so now would be a good time to start your acting careers, launch your own clothing lines, pitch a reality TV show — the sky's the limit!

In a segment called "We Love Llamas!" CNN anchor Don Lemon brought out a very special guest, Pierre the llama, along with his handler, Susan. Initially, Lemon seems very suspicious and cautious of the creature, saying, "I don't want to make any false moves here." (It's a llama, Lemon, not a mountain lion.) After the handler reassures him that it's safe to approach the wooly herbivore, Lemon points out that Pierre is actually famous. According to Susan, Pierre has been on Saturday Night Live and has walked in the Greenwich Village parade.

Lemon then asks, "Are they known to escape? Like today?"

Yes, the handler says. "They love to run."

Their speed could help explain why it took the Maricopa County police about an hour to catch the two runaways as they dodged their lasso attempts while weaving through traffic.

Lemon then notes that authorities had initially thought the escaped llamas were alpacas and asks Susan what the difference between two is. She answers that alpacas are smaller and their fiber is finer. Then Lemon asks if llamas are mean animals. "Obviously not — just look at his face!" Susan should have answered.

I mean, seriously though. That might be the sweetest face I've ever seen. That's the kind of face you want to call up after you've had a rough day. "Oh, llama, you should have seen the way his new girlfriend looked at me!"

Susan calls them "docile" and mentions that they're natural guard animals for sheep, protecting them from predators like coyotes. It's funny because when you think about it, sheep are kind of like llamas' smaller, squatter cousins. But in fact, llamas are part of the camelid family and are related to camels. But, if you think about it some more — don't llamas look like what happens when a camel mates with a sheep?

After tentatively petting Pierre and half-listening to Susan, Lemon asks, "Are we done? Are we out of time?" You ingrate. If I had the chance to be up close and personal with a llama, I would have turned that segment into a multi-part series. Long live llamas!