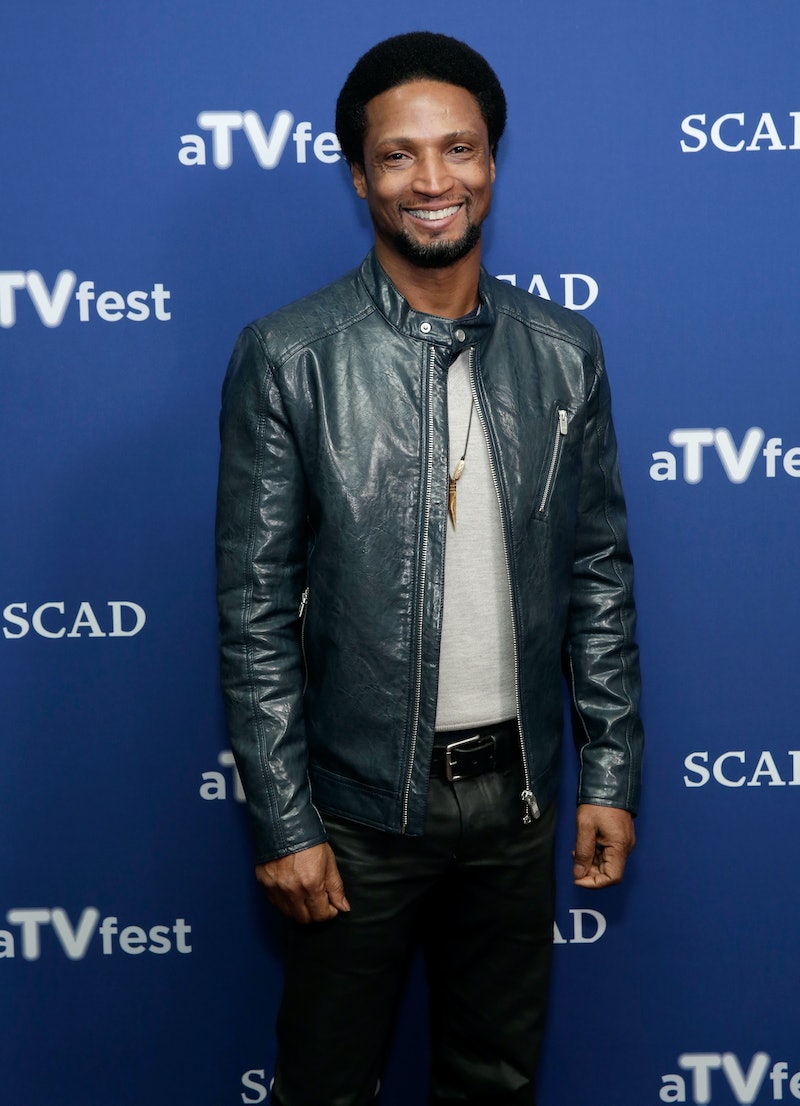 If you're a star of the show that's replacing How To Get Away With Murder in ABC's coveted 10 PM slot, it'd be understandable if you were a little nervous. And if your show was an anthology series tackling race, violence, and a heated murder trial, featuring one of the most diverse casts on network TV? No one would fault you for hiding in your house until after the premiere. Yet if Elvis Nolasco, an actor in the network's new drama, American Crime , has any apprehensions about the fate of his show, he's very, very good at hiding it.

"One of the first things that I’ve known from the very beginning is that for network television, there’s never ever been anything like American Crime," Nolasco says. "It’s something that we should all be tuning in and watching."

It's easy to see why he's so confident; Crime, created by Oscar-winning 12 Years a Slave writer John Ridley, is garnering rave reviews, with critics calling it a "searing," "stunning," and "impressively conceived" series. And with that post-Scandal time slot, it's clear that the network has plenty of faith that its new show will be a hit.

"For ABC and for [ABC Entertainment Group President] Paul Lee to be able to give John Ridley free range and the wings to fly, to be able to do the project the way he intended it to do, that’s definitely a very exciting time and a very humbling place to be," says Nolasco.

And the actor's right in the middle of it. Playing Carter Nix, a man accused of murdering a veteran and nearly killing his wife, Nolasco, previously best known for turns in Oldboy and SVU, is taking on his biggest part yet. It's a role that seems bound to propel Nolasco to stardom, and glowing reviews from outlets calling him "exceptional" and "magnetic" certainly isn't hurting. Although Carter is just one of four characters accused of the murder at the center of the show, his storyline — one of drug addiction and love — is being hailed as of Crime's strongest elements.

"He's a very dark and complex character," Nolasco says. "You’re introduced to this guy who’s lost, who doesn’t fit in, who's living in the world of a lost soul, in the world of addiction... but as you start to move forward episode after episode, you realize that this guy actually had a life, that he wore a suit and tie, that he had a job... it’s a character that a lot of people will identify with, that people will be able to feel what he's feeling, that they will be able to understand why he’s taking the path that he has taken and the choices that has made."

In getting the role, Nolasco credits John Ridley, who he'd previously worked with on a 2011 HBO pilot, Da Brick , that was produced by Spike Lee and written by Ridley. Unfortunately, the series wasn't picked up, but Ridley told Nolasco that if there was anything in the future he felt the actor was right for, he would reach out. Two years later, Nolasco was called to meet with the producers of American Crime.

"As an actor, what a phone call to get," he says. "When somebody knows your work and they really admire what you do, and for them to consider you... it’s just a really wonderful place to be."

And the actual experience of filming the show, Nolasco says, was even more remarkable. Talking about his co-stars – Felicity Huffman, Timothy Hutton, and, especially, Regina King, who plays Carter's sister — you can hear the awe in his voice.

"Working with someone like Regina, when I've been watching her work throughout the years — when she showed up to work, to do what she does so well, for me it was just like, wow, I got to get my a-game up," Nolasco says.

He also has nothing but praise for Caitlin Gerard, the actress who plays Aubry, Carter's girlfriend and a fellow addict. Calling her "so talented," Nolasco says that Gerard, a relative newcomer like himself, "helped and enhanced my work."

But perhaps no one Nolasco worked with on Crime had more of an impact than Ridley, the creator and executive producer.

"John Ridley’s such an amazing individual, an amazing spirit," Nolasco says. "He set a tone from the very beginning... throughout all the productions that I’ve been part of, whether it’s theatre or film or TV, I’ve never seen anything like this."

And, quite simply, there's never been a show like American Crime. An ABC series dealing with the issues of race, religion, class, and violence? It's new territory for network TV, but nothing that shouldn't ring familiar to most viewers.

"American Crime is not making a statement," Nolasco says. "Whether it’s racism, whether it’s police profiling, whether it’s the courtroom and everything that happens with a case... these are common themes in our culture and our society."

And the show, Nolasco says, is more about family than anything else.

"What we’re trying to do with American Crime is take one horrific crime but [go] behind the scenes of what happened, and see how it changes the community and how it changes the families," he says. "You’ll see the families of Timothy and Felicity’s characters, you’ll see Johnny Ortiz's and Benito Martinez's families, and how they navigate through that, because it’s not just Carter that’s being accused. It’s four characters that are accused of this crime."

It's that heartbreaking ambiguity — viewers should "make their own conclusions," Nolasco says — that drives the show and sets Crime apart from its peers. It's also what its cast and crew hope viewers take away the most: that truth is complicated, stories have flaws, and even the most long-held views can — and often should — be challenged.

And if all goes well, one that'll last long beyond the few months of its first season.

"That’s what John Ridley intended to do all along," he continues. "To get people to invest in our stories... it’s all about the emotional side, the human aspect of things. That’s what you’re going to get with American Crime."

More like this
What’s New On Netflix: 'Stranger Things' & 'Mean Girls'
By Arya Roshanian
'Succession' Season 4 Could Be The Show’s Last
By Kadin Burnett and Gabrielle Bondi
At 14, Kate Berlant Had A Wheelie Backpack & One Line In 'Lizzie McGuire'
By Samantha Rollins
Everything To Know About The Bear Season 2
By Brad Witter
Get Even More From Bustle — Sign Up For The Newsletter