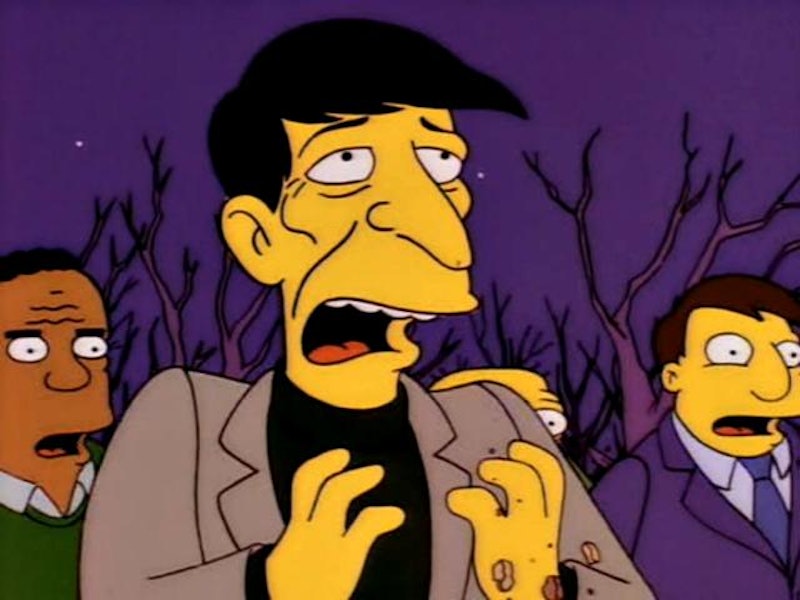 When you played one of the most iconic characters in pop culture history, it's easy to get stuck in the role. Many actors who know they're associated strongly with a particular part attempt to get as far away from it as possible, whether it be Emma Watson's choice to star in The Bling Ring or Robert Pattinson's goal of taking on every indie drama offered his way. It's rare for an actor behind a beloved character to choose to stick with it — yet that's exactly what Star Trek 's Leonard Nimoy, who died Friday at 83, did with his legendary portrayal of Spock.

Not only did Nimoy star in the Star Trek movies, he made cameos in the reboots, voiced Spock in the animated series, and gamely attended conventions for the show as his beloved character. He even signed his tweets with "LLAP," an abbreviation for Spock's famous "Live Long and Prosper" mantra. All of it was a wonderful show of support for the role that made him a household name, but perhaps nothing demonstrated his love for the character more than the parodies he did on TV.

From The Simpsons to Futurama, Nimoy appeared on several shows throughout the year either as himself or Spock, showing that even decades after his series' end, he never stopped embracing his role. And for fans, seeing Spock parody himself was always a treat — how many other stars would agree to do that not once, but five times? His willingness to make fun of himself is just one more reason we'll miss the actor.

The Simpsons, "Marge vs. the Monorail"

In this 1993 episode, Nimoy played himself — albeit in yellow cartoon form — as the guest of honor for an event celebrating the debut of Springfield's new monorail (don't ask). The con man who convinced the town to create the monorail attempts to steal the actor's money, but is eventually the thwarted. It was a brief, random cameo, and Nimoy wasn't even the show's first choice — they asked Shatner and Takei, but both declined — but thanks to hilarious Star Trek references and a shout-out to The Little Rascals, it's considered one of The Simpsons' best cameos to date.

Although Nimoy didn't appear in person on the episode, his voice alone was a big enough deal to warrant a full-on meltdown from Sheldon. The self-professed Star Trek superfan (and Nimoy/Shatner stalker) received a vintage transporter from the show, but proceeds to break it, thus leading him to secretly trade his for Leonard's. Yet his conscience, in the voice of Spock, gets the better of him, and he eventually tells Leonard the truth.

In the pilot of Futurama, set in the year 3000, Fry accidentally enters the head museum, where Nimoy's own famous face is on display. Despite having been dead for centuries, the actor's head is very much alive, if unable to do Spock's famous salute.

The Simpsons, "The Springfield Files"

Nimoy appeared as himself for a second time on The Simpsons in 1997, during an episode in which Homer believes he's seen an alien in Springfield. The installment opened with Nimoy, making fun of both his Star Trek and In Search Of... pasts, hosting a show about alien encounters, and referencing a specific event in Springfield. Along with Fox Mulder and Dana Scully (it was avery '90s episode), Nimoy went in search of the "alien" that Homer discovered, only to find that it was just Mr. Burns after a longevity treatment.

Futurama, "Where No Fan Has Gone Before"

This 2002 episode of the show was based entirely around Star Trek, so it was only fitting that Nimoy, along with William Shatner, George Takei, and more members of the Original Series, made an appearance. And oh, was it memorable — between the discovery that the cast had eternal youth, their battle with Planet Express, and the image of Shatner making out with Leela, this was one Futurama episode fans are likely never to forget.