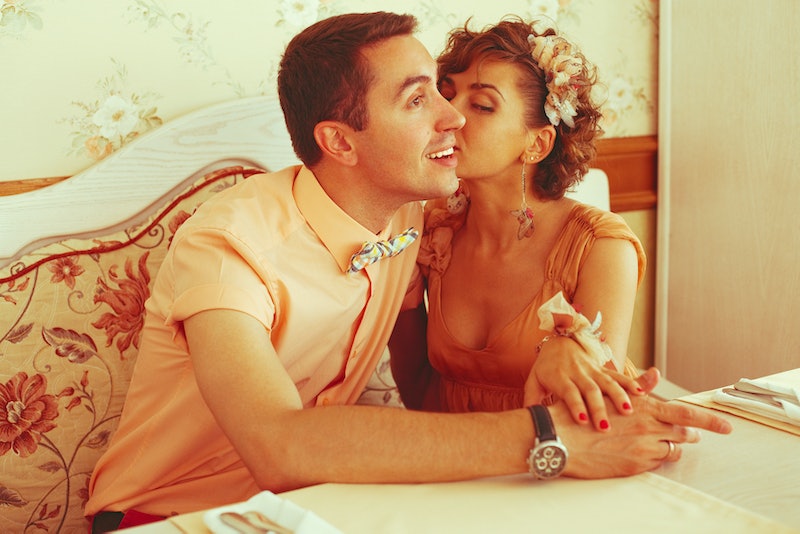 When is the "right" age to get hitched? An article in The Washington Post cites a recent study by Texas University that says getting married in your mid-to-late-twenties is ideal, and produces the "highest quality unions." I, however, am a bit skeptical. Studies about relationships should always be taken with a truckload of road salt, and it's unlikely that these findings can be easily extrapolated to the general population. For every plus listed, there is a minus on the flip side. As someone who got married in her late twenties can attest, it's not ideal and it's not terrible, either. I've watched dozens of marriages fall apart and grow stronger, and none of their outcomes had to do with the ages that the couple got married.

Studies and articles about the "best" age to achieve any major life milestone have one thing common: they usually fail to take into account how everyone's life trajectory is drastically different. Relationships are too individual to base on timelines, although there are admittedly trends that can predict whether you are more or less likely to stick it out for the long haul. Even that "goal" in itself is another issue, since it's unfair to judge a marriage's success by its endpoint, and not on the years of relationship in-between. For these reasons, it's important to look behind the glowing positives that are attributed to marrying young. Here are just a few supposed benefits to pairing off in your mid-to-late twenties that might not work out in your favor.

1. You Are More Likely To Marry Someone Who Hasn't Been Married Before

Why is this a good thing? There's a reason, "If you ain't first you're last," isn't a slogan about marriage. Both my parents married three times each and their third time was a charm. There's nothing like experiencing bad relationships to enhance your next one. Getting all that trial and error out of the way can make marrying later in life far more rewarding.

2. You Get To Grow Up Together

The Washington Post article on the benefits of marrying young includes a quote by a 31-year-old-woman who says, "My husband and I got to grow up together — not apart." Conversely — and I have experienced this personally — if you marry youngish you and your partner are stuck slogging through all those awkward, broke ass growing pains that come with your twenties (and sometimes even your early 30s). Who wants to deal with two sets of hugely inflated dreams still left over from childhood? It could also be easier to be a little older, wiser, richer and more settled in your groove when you join forces…

3. You'll less likely miss the boat on the "best possible mate" if you wait too long

This sentiment sounds straight out of a conservative women's manual for living. As if there's a finite number of partners for each person and they slip away as the years go by! How depressing. Everyone should wait for the person that works best with them, regardless of age. And who says being permanently partnered is everyone's one true destiny anyways? It's all kinds of wrong using scare tactics like this.

4. You Have More Sex

You don't need a study to tell you that people in happier marriages have more sex — and vice versa. The argument is that marrying young means you'll be happier (due in part to the factors above), and you'll therefore have more sex, but since correlation doesn't equal causation, I think this is pretty subjective. Do they really mean to suggest that George Clooney and Amal Alamuddin don't have as much sex as some 26-year-old-couple because they married later in life? Please. There is no one right age to get married: there are benefits and drawbacks during every decade, so it's on you to roll the dice.