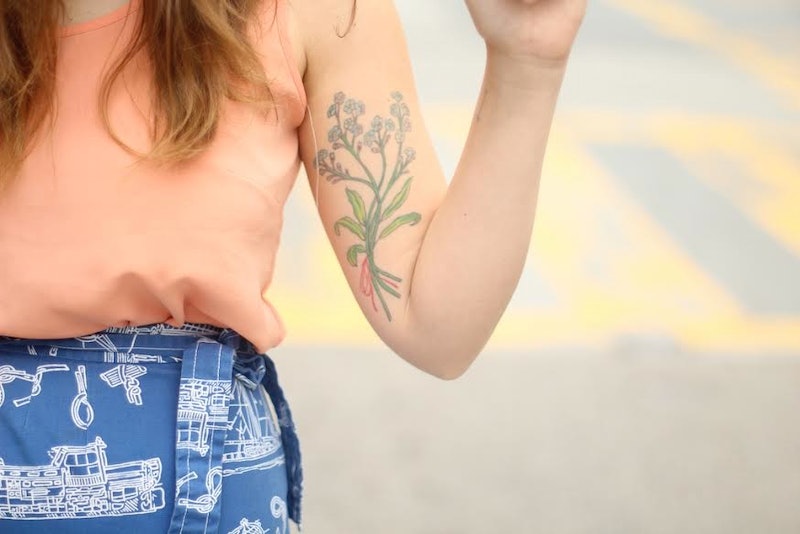 "Did that hurt?" asks almost everyone who sees a freshly inked tattoo on a human. While no tattoo feels like a fun little tickle, there are spots where tattoos hurt the most — something to consider if you're not great with pain, but desperately want to start that sweet sleeve. It's definitely not always the orgasm of pain often described by thrill-seekers. I'd be lying if I didn't say that the sound of a humming needle and the sight of ink on my skin doesn't send a sprig of adrenaline up my spine, but there are some tattoos that have hurt like a you know what. For those that don't mind the pain, when you get in the groove of the tattoo you've been dreaming of, sitting in the chair doesn't seem so bad because the result is going to rule. I mean, let's be real here: Tattoos are really cool.

Since I currently have about five tattoo ideas I haven't been able to shake, I know that it's high time I get back in the chair. This, of course, got me thinking of the placement and how painful my new ink is destined to be. I couldn't help ask my fellow tatted friends what their most painful tattoo was to try to find an ideal spot for my new art to go. I was looking for trends: Did everyone have the same answer? If not, why did a rib tat suck for one person but not the other? Could it be less about the location and more about the amount of shading when it came to causing an almost unbearable pain? Despite my hunt for a solid answer, what I really learned from their responses is that it's all circumstantial.

We all have a different tolerance of pain and I couldn't believe how vast variation of the most painful tattoos seemed to be. One thing that all 11 of these people can say about their most painful tattoo is that it was still worth all the teeth grinding, swelling, and anguish for a permanent work of art.

"I decided to get this eye tattooed on my elbow...it reminds me of the Twilight Zone, which I used to watch with my dad growing up. I also like to think of it as the eye that watches my back. This tattoo [definitely] hurt the most...done by a visiting artist from France at East Side River Tattoo in Greenpoint, Brooklyn, NY."

2. The Inside of Isla's Arm

"This was the first large, color tattoo I got. It was all going swimmingly until the artist got to the stalks of the flower. The part by my elbow felt so tender, like my bone was being tattooed. "

"I fell of my bike the night before so I [was] all banged up. The tattoo [by Jason Graham] wasn't too bad overall, but near the elbow where the skin just lies over bone was pretty rough."

"I'm pretty much completely covered in tattoos, but the hands hurt the worst for me. [The] thin skin and the boney areas in the knuckles are awful. I always keep in mind what the finished product is going to be."

Before this, I hadn't had a tattoo last longer than a half hour. I thought I had everything under control after the first hour, until the detail came up near the inside of my elbow, it was like nothing I had ever felt before. I trusted my artist; I trusted the pain would be worth the permanent gazelle skull that I get to look at every day by Minka Sicklinger.

"I have bigger tattoos on my ribs and inner arm that certainly weren't fun, but this tiny one on my shoulder really, really sucked. It's so close to my neck, and I had these intense shooting pains all the way up to my skull the whole time the artist was tattooing me. Luckily it only took about five minutes, or I probably would have passed out."

"My most painful tattoo is the one on my inner arm that says 'it is well' in my handwriting. I went in super confident because until that point, none of my tattoos had hurt. As soon as the guy started tattooing me I was instantly in pain — and I couldn't shake the idea of feeling like my arm was a balloon he was about to pop with the needle. I was so freaked out there are two small breaks in the ink because I kept moving around in my chair. It was my fourth tattoo, but I'm sure the guy thought it was my first from my reaction."

"I finished the outline first, though I think the shading may have been the most difficult. I have smaller tattoos that have definitely hurt more intensely, but I think the time and shading really overshadows the small tattoos I have in more sensitive areas."

"I guess this tattoo on my head hurt more than my others because there was a needle vibrating on my skull for about 3 hours. No headache, just a tiny bit of nausea."

"It was completed in one session that took about three hours. Towards the end, it was so hard keeping the thigh still, and afterwards, my thigh got HUGE and so, so heavy. The design is a wood carving made by my dad and it's about the time during senior year of high school that my mother and I found a little wounded pigeon in our backyard in Puerto Rico, and we nursed it and took care of it until it could fly. Eventually it flew away, but for a little over a week, it would return every afternoon and pose itself on my head."

"The black details right above the red mask on my forearm sucked because the artist hit a vein or a tendon or something. All of a sudden, my arm started bleeding this gross mix of blood and ink. It was definitely spooky, and took forever to heal."

Did this list make you want to get even more tattoos? Yeah, me too.