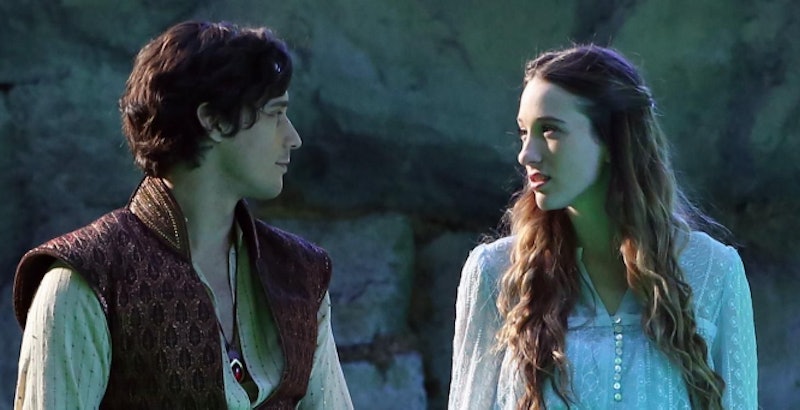 If you like the idea of Once Upon a Time, but have grown weary of its convoluted storytelling and more incomprehensible fairytale mashups, Once Upon a Time in Wonderland (heretofore Wonderland, for short), might just be a perfect fit for you. The series are certainly just different bites of the same mushroom, but where Once has lost itself in its concept (how many characters can we intertwine?!), Wonderland's story is much more contained.

At its heart, it's a fun inverse of the typical fairytale love story. There's romance. There's a proposal. And then, there's tragedy: One member of our heroic couple is captured and it's up to true love to save the day. In this case, Alice is our knight in shining armor and her damsel in distress is a handsome genie she met on a return trip to Wonderland.

Let's start with the latter: Alice, in this world, is not subject to a warm welcome on her return to jolly old England. Unlike many versions, which portray her trip to Wonderland as existing in an alternate timeframe, allowing her to return home very shortly after she left in "real world" time, Wonderland assumes a much longer absence. Alice was gone so long, in fact, that her parents presumed her dead. When she returns with fanciful tales of Wonderland, she's branded a lunatic and, we are led to assume, spends much of her life in doctor's offices and, later, institutions. It's kind of amazing that Wonderland deals so directly with the implications of a little girl who comes home truly believing she had a fantastic adventure in another world. As one of her scarier, lobotomy-prescribing doctors explains, Alice isn't the first little girl to invent a happier world to escape to, she's just the first to still believe in it when she's grown up.

After years of ridicule, Alice has finally decided to stop believing in Wonderland, more to forget her tragically lost love than because she's really stopped believing. She agrees to treatment that will relieve her of the memories. (Don't worry - she's quasi-rescued and doesn't go through with it, of course.)

Now, onto that Genie. In true Once fashion, Wonderland does its fair share of story melding. While Once has brought in pretty much every fairytale under the sun (or, at least, in the Disney canon), Wonderland seems content with two: Alice in Wonderland and Aladdin. This is the Disney version of Aladdin, so Lost alum Naveen Andrews appears as Jafar to compliment Wonderland's Red Queen (not to be confused with the Queen of Hearts - because they are, and always have been, separate characters). During a return trip to Wonderland (Alice is looking for proof that her stories are true), Alice encounters a genie named Cyrus (he's neither blue, nor voiced by Robin Williams, but Jafar is still after his wishes). Cyrus is dashing and pretty instantly smitten with Alice. We kind of believe their meet-cute because Sophia Lowe and Peter Gadiot have the kind of chemistry that sells love at first sight. Alice frees Cyrus instantly and they travel the world, having adventures here, there and everywhere, leading up to a supposedly-beautiful proposal from Cyrus that Alice cuts short with her stream of yeses. Cue the Red Queen (again, not the Queen of Hearts. They're totally different people and always have been so stop whining about Barbara Hershey, people), who magically pushes the genie into the boiling sea (great view, but still a bad location for the proposal) after her cronies fail to capture him.

So there you have it: Alice distraught. The love of her life is presumed dead. Luckily, presuming loved ones to be dead is a common misconception for members of her family and Alice is mistaken; her genie survived the fall thanks to a well-placed magic carpet. He's just imprisoned by Jafar, who is after his wishes. Where are the wishes? Alice has them in the heel of her shoe.

While Wonderland certainly has some slightly cringeworthy moments (like when we meet Jafar and have to accept that he's actually a central villain in this story), it's, on the whole, much tighter and cleaner than its predecessor.

tl;dr? Here are five signs you'll like Wonderland, if you're torn on giving it a try. You'll probably like Once Upon a Time in Wonderland if...

1. You like kick-ass female heroines and are a sucker for gender role reversals.

2. You've been dying to hear John Lithgow's voice without seeing his face (he voices the White Rabbit).

3. You like Once Upon a Time, but wish it had hotter guys (Cyrus is definitely eye candy).

4. You like your Wonderland with a dash of danger (or, more than a dash).

5. You're a huge Aladdin fan and can overlook the weirdness of it sharing story space with Alice in Wonderland because you just love it that. much.