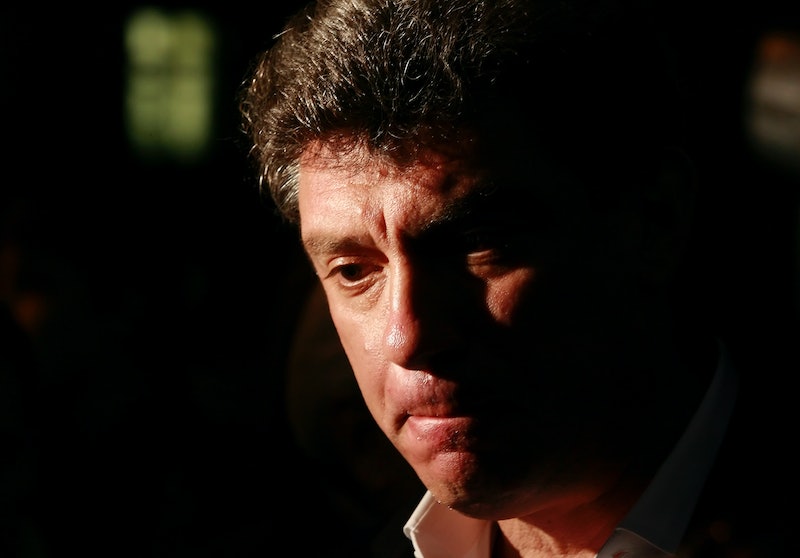 Boris Nemtsov, an outspoken critic of President Putin's regime, was assassinated late on Friday in the shadows of the Kremlin. The Russian liberal politician and Putin opponent was reportedly gunned down on a bridge in central Moscow, and both sides are implicating each other in the shocking death that could rock the already tense nation. Nemtsov was 55 years old.

Authorities said Nemtsov, who one of the leaders of the anti-Putin solidarity movement and an ardent supporter of Ukrainian independence, was shot at least four times while walking on a bridge over the Moskva River shortly before midnight on Friday. According to Reuters, the opposition leader was shot in the back by a gunman who swiftly escaped in a passing car. Nemtsov was reportedly walking with an Ukrainian woman at the time, but she was uninjured in the attack.

The Kremlin released a statement on Saturday announcing that leaders of the Russian Investigative Committee, Interior Ministry and Federal Security Service will collaborate on an investigation into Nemtsov's murder. The Kremlin added that Putin called the murder "cruel" and alleged that it has "the makings of a contract crime."

On Saturday, the Russian president also expressed his condolences to Nemtsov's mother, Dina Eidman, and promised to find her son's killers:

Please accept my deepest condolences in connection with this irreparable loss. I sincerely share your sorrow.

Boris Nemtsov has left his mark in the history of Russia, in its political and public life. He occupied significant posts in a difficult time of transition in this country. He always openly and honestly voiced and upheld his views.

We will do everything to ensure that the perpetrators of this foul and cynical crime and those who stand behind them are properly punished.

A popular political star who was once seen as the successor to former Russian President Boris Yeltsin, Nemtsov made a name for himself during the 1990s, serving on the Federation Council and eventually appointed as First Deputy Prime Minister of the Russian Federation in 1997. But in the early aughts, when Putin first took over as president and democracy in Russia began to wane, Nemtsov became a vocal oppositional leader, publicly criticizing Putin's policies in articles and creating alliances with liberal politicians in Ukraine — most of whom were not supported by the Russian government. Nemtsov has been an ardent supporter of Ukrainian independence and democracy, and his support was no doubt crucial during the last year, where conflict in eastern Ukraine escalated with bloodshed and battles continue unresolved.

In 2008, Nemtsov co-founded Solidarnost, an anti-Putin solidarity movement taking its name from the Polish trade union that began under communism in 1980. Nemtsov was also co-chair of the Parnas Party, and a frequent political organizer who always demonstrated for freedom, democracy and expression. Nemtsov was arrested several times under Putin's regime, and was a known political foe of the Russian president.

In an interview with the Sobesednik blog, a Russian news outlet, just two weeks ago, Nemtsov said he was worried about his future under Putin. "I'm afraid Putin will kill me," he said.

Nemtsov, who has been investigating Russia's involvement in the year-long Ukrainian conflict, added then: "I think that he [Putin] started the war in the Ukraine."