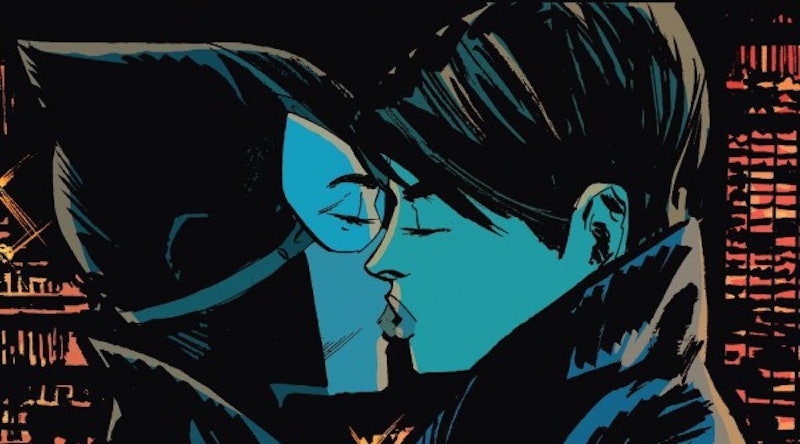 The cat is out of the closet, and it didn’t take a piece of string to entice her, just seventy-five years of waiting. For the first time ever in the series, Catwoman Selina Kyle kisses another woman and establishes herself as openly bisexual.

Spoiler alert, here’s how it happens: In its newest issue, Catwoman #39, Selina Kyle hands over the Catwoman identity and spunky leather costume to Eiko Hasigawa. Kyle is making a career transition from supervillain to mob boss. Before they part ways, the women share a kiss. Should they survive the oncoming mob way, Selina promises, she’s gonna look Eiko up.

Catwoman writer Genevieve Valentine wrote in her eponymous blog that she simply thought it was time to let the cat out of the bag.

“She’s flirted around it – often quite literally – for years now; for me, this wasn’t a revelation so much as a confirmation. And as Mark Doyle and I were first hashing out the relationships in this arc, Eiko seemed like the right person: intelligent, driven, in that uncanny valley of Almost Catwoman, and knows enough about Selina that their honesty has become something of a shelter in a situation that’s getting increasingly dishonest for everybody involved. The more we talked about it, the more it was something I wanted to make happen.”

Valentine also made her readers two promises — Selina is a “canon bisexual,” which means this is a character trait that won’t be dropped or forgotten, and neither will her past history with Batman. Basically, it’s gonna be an über-dramatic, super-powered love triangle.

The fans cannot wait. They rallied to Twitter to express, among other emotions, excitement:

And their hopes that DC Comics will continue to push the envelope.