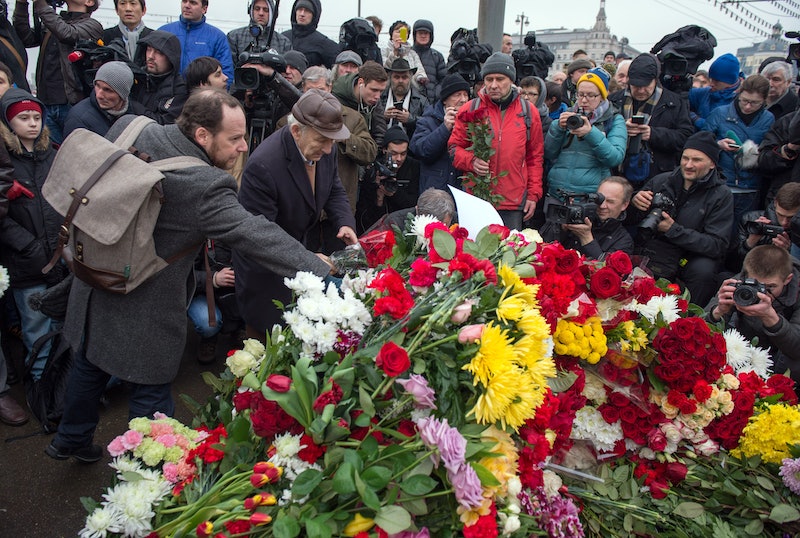 A day before a demonstration against President Putin's policies was set to take place in Moscow, thousands gathered on the bridge over the Moskva River where opposition leader Boris Nemtsov was fatally shot in what authorities believe was a planned killing. Many residents laid flowers, photographs and political posters on the sidewalk where the 55-year-old liberal politician fell just hours after he gave a blistering critique of Putin in an interview with a local radio station.

Although the mourning march for Nemtsov is scheduled for Sunday morning — in place of the anti-Putin protest — thousands have already begun mourning the popular member of Russia's Parnas Party and solidarity movement Solidarnost. Ambassadors from the United Kingdom and Germany visited the Bolshoi Moskvoretsky Bridge Saturday afternoon, flowers in hand.

From afar, world leaders praised Nemtsov's fearless commitment and condemned his assassination, stopping short of accusing any parties of the politician's murder. In a statement released Friday night, President Obama called on the Russian government for "a prompt, impartial, and transparent investigation" into Nemtsov's murder.

"I admired Nemtsov’s courageous dedication to the struggle against corruption in Russia and appreciated his willingness to share his candid views with me when we met in Moscow in 2009," Obama said. "Nemtsov was a tireless advocate for his country."

German Chancellor Angela Merkel said in a statement that she was "distraught" over Nemtsov's murder and praised the politician's "courage" for standing up to the Russian government. Meanwhile, British Prime Minister David Cameron said he was "shocked and sickened by the callous murder" in a statement released Saturday morning.

"Boris Nemtsov was a man of courage and conviction," Cameron said. "The courage of Nemtsov’s life contrasts with the utter cowardice of his murder."

In Moscow, U.K. ambassadors paid their respects along with other European Union officials, bridging the gap between Russia and the West.

As night fell in Russia on Saturday, the bridge where Nemtsov last stood was covered with flower petals and written remembrances of the outspoken opposition leader who was feared by the Kremlin.

Ukrainians also paid their respects for Nemtsov, a supporter of Ukrainian democracy, outside the Russian Embassy in Kiev, while others gathered in Maidan, the city's central square.