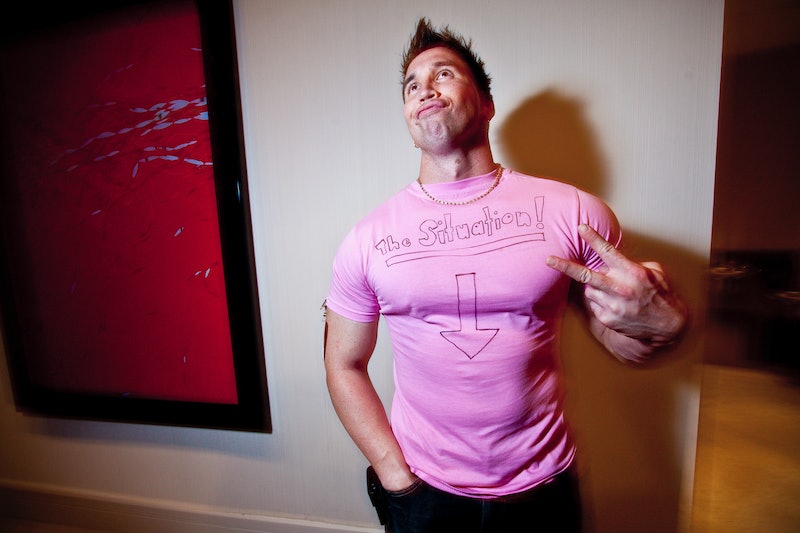 When you hear the term "bro culture," what do you think of? Guys in seersucker, Sperry's, and backwards hats high-fiving each other, calling each other variations of "broski" and "Broseph"? Just me, then? Urban Dictionary's definition of bro culture reads: "Where bro-hams, Bros, guys in groups interacting [sic] with each other (often in the workplace) on the basis of suppressing their own insecurities about their masculinity by degrading women in a hope that they look big, tough, and without emotion." While that might not be an official definition, I think (as usual) Urban Dictionary did a pretty good job of capturing what this phrase represents.

One (perhaps over-simplified) way to put it is "bro culture" can refer to certain behaviors men are expected to exhibit based on gender norms; bros refraining from showing emotion because they're "supposed" to be big and tough is a perfect example. It's also an example of how the patriarchy hurts men, and not only women. I'm thinking specifically of the Chally Kacelnik quote you've probably seen on Tumblr: "The thing is, it's patriarchy that says men are stupid and monolithic and unchanging and incapable...It's patriarchy that says men can only be attracted by certain qualities, can only have particular kinds of responses, can only experience the world in narrow ways."

The idea that people of a specific gender "have to" act a certain way is pretty lame, not to mention, potentially harmful (like, feeling like you can't express your emotions because you're a "real man" probably doesn't end well for anybody). Not everyone subscribes to "bro culture" and its ideas about masculinity. One Redditor took to AskReddit to ask guys of Reddit what things they secretly hate about bro culture. I've scrolled through the thread and picked out a bunch of totally accurate and eye-opening responses.

Go ahead, let it out. Anybody who would actually judge someone for showing their feelings is not someone you need in your life.

Ugh, this one drives me absolutely insane

"Isn't gaslighting so much fun, bro? I totally love dismissing other people's legitimate emotions and making them feel invalidated and crazy in the process."

Thankfully no guy has ever referred to me as a "piece of ass" (regardless of the temperature), but if he did he would most certainly not be getting my number. This guy is right, what a weird and objectifying way to call someone attractive.

Does that stuff actually work on anyone?

I will admit, I loved watching that VH1 reality show with Mystery and his crew, because that was prime entertainment. However, any guy who honestly thinks he'll impress a girl by insulting her is really missing the mark.

TIL not every dude likes strip clubs

You learn something new everyday.

Is this even a thing?

I really had no idea bros were feeling pressured into listening to Wiz Khalifa. My heart truly goes out to all the bros smoking to "We Dem Boyz" against their will.

Why can't we just admit when people are good-looking?

Right?! What's the big deal if another guy wants to admit aloud that Ryan Gosling is a perfectly handsome human? It's not like we're not all thinking it.

The entire problem with bro culture, in one sentence

BOOM. Nailed it. Thread over.