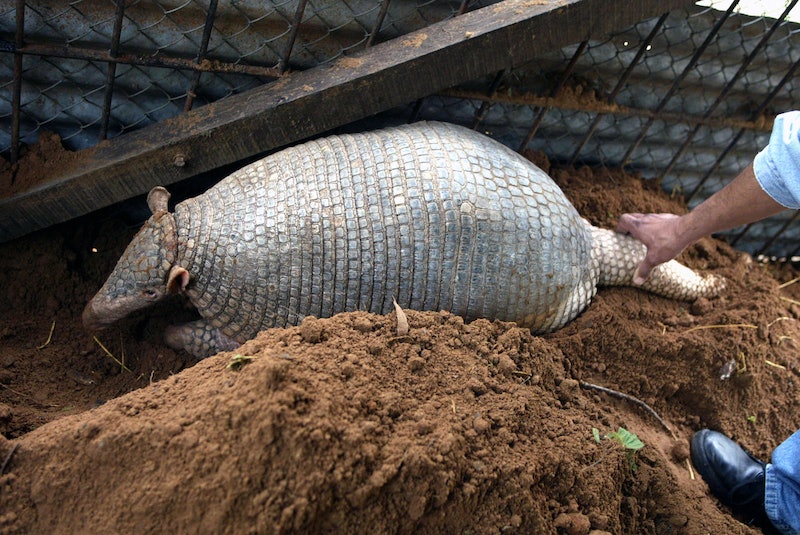 If you've been following the news throughout the last year, you've probably been hearing about a number of diseases that sound tailor-made to disturb, distress, and depress — like Ebola, for starters, to say nothing of the anti-vaccination fueled measles outbreak across swaths of California and other parts of the United States. Well, here's a similar headline you ought to be aware of: three new leprosy cases have occurred in Florida, and we may have armadillos to blame.

Yup, you heard right. Those underratedly adorable little critters may, in fact, be a health hazard to humans. This is by no means something that's worth getting riled up about, to be clear — armadillos aren't exactly a prized household pet, after all, and three cases isn't such a harrowing outbreak — but it's worthwhile information to file away in the back of your mind.

Two of the three cases have reportedly been linked to interaction with armadillos so far. Specifically, "nine-banded" armadillos, a reference to the number of segmented strips along the middle of their armored backs. If an armadillo only has five bands, you can rest easy in the knowledge that it's not carrying leprosy. And not everyone can get the disease, to boot — according to The Guardian, nearly 95 percent of humans are immune from the get-go.

Humankind has had a fraught, longstanding history with leprosy, so it's little surprise that people take notice when a miniature outbreak like this happens. It's a disease that's referenced all the way back to biblical times, an ailment that Jesus was claimed to have cured in sufferers during the New Testament. Clear through to modern times, it remains a problem in some places — in India, for example, the stigma surrounding leprosy often leads to delayed treatments and needless anguish.

Now, maybe you're reading this and thinking to yourself: hey, I was just touching a nine-banded armadillo in Florida yesterday, with my bare hands! If so, you'd be forgiven for feeling a trace of concern about this. But never fear! With the American health infrastructure at your disposal, even a confirmed leprosy diagnosis can be capably treated, as long as you catch it in time. Here are the leprosy symptoms to look out for, as quoted from the CDC:

The most dangerous thing about leprosy is that when it goes untreated for too long, you can suffer nerve damage that makes it impossible to tell if you're injured. That's what's behind the popular perception of leprosy as a disease that causes limb loss, and disfigurement — when you can't feel pain anymore, it's incredibly hard to tell if something is wrong with your body. Fortunately, leprosy can be treated by a lengthy course of antibiotics, so if you seek medical attention promptly, you should be okay.