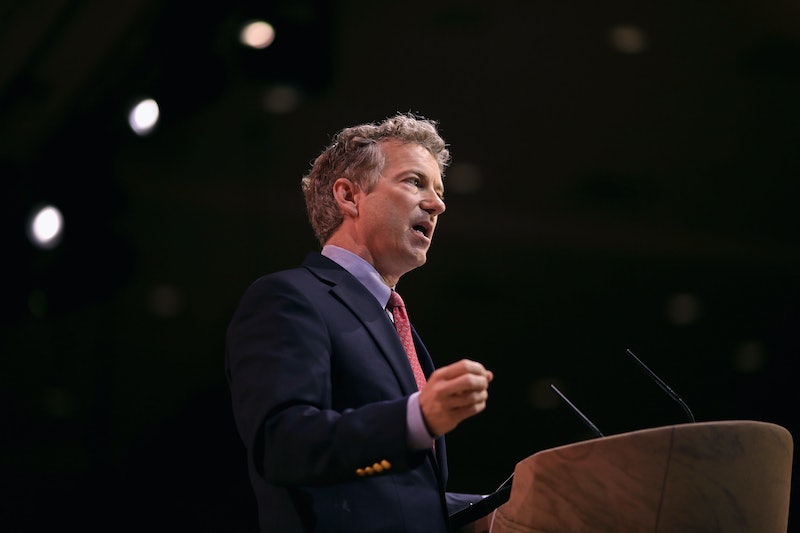 Another year, another virtually meaningless prize for Kentucky Senator Rand Paul. Each year, the much-ballyhooed Conservative Political Action Conference (CPAC) holds its straw poll, intended to gauge its attendees' enthusiasm towards a likely slate of presidential contenders. And on Saturday, the vote proved to be a three-peat victory for the junior Republican senator from Kentucky — Rand Paul won the CPAC straw poll, his third consecutive win despite a close call with the first runner-up, Wisconsin Gov. Scott Walker. They were trailed by Texas Sen. Ted Cruz, former neurosurgeon and GOP celebrity Dr. Ben Carson, and former Florida Gov. Jeb Bush, respectively.

Make no mistake, anyone who attends CPAC would love to leave with that headline splashed across print and online media. But sadly for Paul, these things don't tend to mean much, at least not as far as scraping towards the White House is concerned. While notching a plurality of support among a fervent conservative crowd isn't a bad thing — conservative bona fides are in high demand, as the highly divisive, bitter GOP presidential primaries of 2012 illustrated pretty vividly — the simple truth is that the CPAC straw poll is dismal at predicting future presidents, especially lately.

Here's the gist. Over the history of the CPAC straw poll (there are ten winners on record between 1976 and 2000, and one every year since 2005), only two people have ever won and gone on to be elected president: Ronald Reagan and George W. Bush. And besides them, only one other winner even netted the Republican nomination — Mitt Romney in 2012, the last year that somebody not named Rand won the top slot.

As a matter of fact, the Paul and Romney family names have dominated the field since the straw poll started going annually in 2005. Between Ron, Rand, and Mitt Romney, you've got every single CPAC straw poll winner since 2007. The winners from the two years prior were even more spectacularly unsuccessful, to boot — in 2005, former Virginia Senator George Allen won the poll before his campaign flamed out over his use of an obscure racial slur, and in 2006 it was Rudy Giuliani.

In fairness, just saying "it was Rudy Giuliani" probably tells the tale, but it's always worth noting the dubious record he secured when he ran in 2008 — he spent $48 million in the primaries and won just one delegate, the most cost inefficient margin in America's campaign history. As noted by the Los Angeles Times, at that pace Giuliani would've needed $60 billion to win the Republican nomination.

So, basically, don't start printing those 10 million "I'm For Rand" bumper stickers just yet. The GOP field seems compellingly uncertain this cycle, so it's entirely fair to think Paul might be due for his big moment. But at the same time, the CPAC straw poll really tells you very little —except whether a Romney or Paul is in the running, apparently.