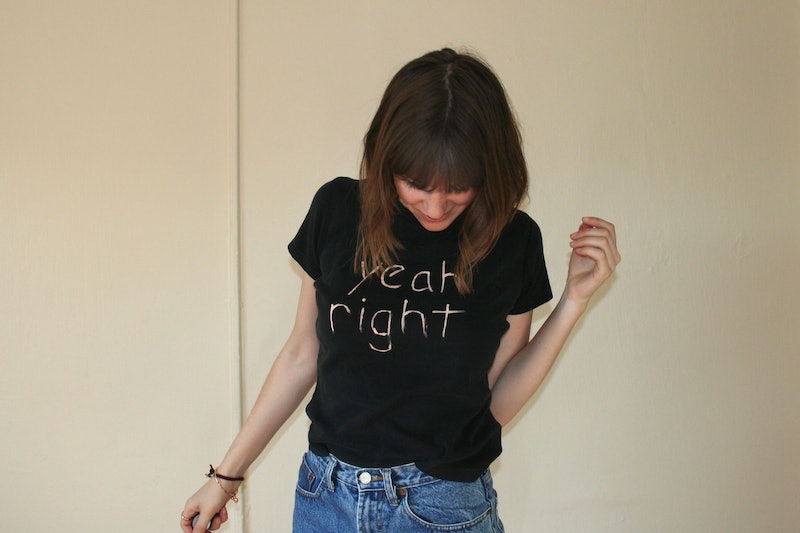 Friends, I just came back from the Pinterest rabbit hole of DIY t-shirt ideas, and let me tell you, it's not pretty. Most DIY t-shirt “hacks” really look like DIY t-shirt hacks, you know? I don't care how many fancy knots you tie in the back of your old cross country shirt — no one is fooled. No one is impressed. No one is going to lovingly touch the fraying edges and whisper, “Is this Prada?”

In short, there's something about DIY t-shirt hacks that you can see coming for a mile away: the hand-cut edges, the chunky fringe strung with pony beads, and the cut-outs — oh, the cut-outs! I could write an entire opera about all the terrible ways the internet wants you to inflict “sexy cut-outs” on your innocent little high school theater T-shirts.

But the general idea of transforming old T-shirts into delightful new objets d'art is wonderful. The key, I have found, is simply lowering your expectations. No, you can't turn the free shirt you got at a baseball game into a gift from the Chanel gods, no matter how much money you throw at it. You can, however, take a bunch of ratty thrifted tees and turn them into something vaguely hipster-cool. I know this, my friends, because I've done the legwork.

Yes, in the great tradition of investigative journalism, I went to the Society of St. Vincent De Paul Thrift Store in Los Angeles, dropped a cool $10 on seven used t-shirts*, sprinted to the laundromat to wash away the bad juju of their former owners, and tried out seven different easy-DIY-t-shirt-craft-type ideas to see which ones were actually wearable and which ones belonged in my upcoming opera, Song of the Failed Pinterest Project.

The process: Because I am not a visual artist, no matter how many Change.org petitions called Get Tori an Oil Painting MFA circulate among us, I opted to go for something really simple: triangles. I slipped a piece of cardboard inside the shirt to keep the paint from leaking through to the other side, used Scotch tape to mark off three triangles on the shirt's chest, and painted inside the lines with some white fabric paint I bought at the gift shop of an architectural school.

I let the paint dry for about 30 minutes, then ran an iron on low heat over the pattern. I noticed a strange smell. HORROR OF HORRORS! I'd forgotten to remove the Scotch tape, and burned myself trying to scrape it off the iron, but beauty is pain, and the scotch tape came off fine. I finished setting the paint by slowly ironing it for another two minutes or so.

The verdict: HELLO, I LOVE THIS T-SHIRT. It's all clean and graphic design-y (if you're a graphic designer and you're shaking your head right now, just let me have my fantasy, okay?) and I love how the white triangles look against the coral. I've worn this baby multiple times already.

The premise: Cut off the bottom of an old t-shirt and loop the resulting circle around your neck.

The process: I liked the stripes on this t-shirt. I thought to myself, "This looks like a pattern one might find on an infinity scarf sold at Wet Seal." I cut the bottom off.

The verdict: Ehh. I guess it's okay, but I couldn't stop thinking, "I'm wearing a t-shirt around my neck."

3. The Classic Crop Top That All the Cool High Schoolers Are Wearing to Pitchfork

The premise: Everybody's doing it. Hack an old t-shirt into a loose crop top, no sewing required.

The process: So I got this “hilarious” old band shirt for The Dan Band — they're probably a really famous indie band but I refuse to Google them because I insist that The Dan Band is a group of 40-something dads who got a little ambitious with the merch before they even recorded an EP — and thought that the design would make it perfect for the sort of loose, oversized-armholed crop top that all the cool kids are wearing. Using mostly the power of my imagination, I cut off the bottom and a healthy portion of both sleeves.

The verdict: My official opinion is that this shirt is cute-ish. Unfortunately, the fabric is a little too stiff for this sort of crop top, so it kind of awkwardly hangs off my body, and it's REALLY OBVIOUSLY A DIY PROJECT which I dislike, but would this be out of place at a summer BBQ by the lake? No. No it would not. PS: For those wondering, the expression I'm making in that last picture is “me greeting my cool friends from across the Pitchfork lawns.”

The premise: Dab watercolor paints onto a white fabric surface and you'll be left with a gorgeous thing like this.

The process: I know, I know. You're asking the hard questions right now, like “Tori, why in the world would you choose a tourist shirt from the La Bufadora marine geyser of Ensenada to act as the background for this project?” Well, since the T-shirt is so wonderfully touristy already, I thought I'd sort of pump up the tacky factor with watercolors, and the resulting shirt would be this highly ironic hipster delight.

Note: if you find yourself justifying life decisions with the phrase “highly ironic hipster delight,” YOU HAVE GONE WRONG SOMEWHERE.

So I got the watercolor fabric paint — no, that's a lie, I used fabric dyes and mixed them into little measuring cups of water. I put cardboard inside the T-shirt to protect the back and began dabbing on the paints in an abstract pattern using this really technical tool called “a wadded-up paper towel.”

The verdict: I DON'T WANT TO TALK ABOUT IT.

The premise: I generally hate cut-outs, especially DIY t-shirt cut-outs, but then I thought to myself, What if the cut-outs weren't trying so hard to be sexy? What if they were very, very small?

The process: Using my favorite t-shirt from the thrift store haul — one word: shoulder-pads — I cut out five subtle diamond shapes just around the neckline. The shakiness of my hands during the process confirmed what I have always suspected: Despite popular opinion, I shouldn't be a brain surgeon.

The verdict: Cute, but almost too subtle. I think the crazed floral design makes it hard to actually spot the cut-outs, so this DIY would probably work better on a solid colored t-shirt. But I really like the effect — it's like a built-in necklace. A man from Barcelona will probably notice these cut-outs someday when he leans in to ask, “What is that intoxicating perfume you're wearing?”

The premise: Use a paintbrush dipped in bleach to draw your favorite quote — or a replica of the Mona Lisa — onto a dark t-shirt.

The process: PURE MAGIC. Again, I put cardboard inside the t-shirt to protect the back, and began drawing a phrase that felt particularly close to my heart. The fabric immediately turned copper-colored, and gradually lightened to off-white as the bleach dried. Since you can see the letters appearing seconds after you draw them, it's easy to go back over them and fill in missing spots.

The verdict: This is absolutely my favorite one. I've worn this shirt so many times since making it, and I plan to make tons more bleached-letter T-shirts until I've made a T-shirt with the entire text of The Fault in Our Stars on it but with one word changed and John Green comes after me for copyright violation and I'm like, "No, this is my book, The Fault In Our Stars With One Word Changed."

PS: The man who served me mac-and-cheese at an airport restaurant told me, “I like your t-shirt. It looks vintage.”

7. The Macrame Planter That You Almost Bought at That Overpriced Boutique But It Was $45 So Obviously You Didn't

The premise: You can apparently cut and tie your old t-shirts into macrame planters, which is the greatest thing I've ever heard. I don't know about you, but I live in LA, where you can't throw a rock without hitting an expensive macrame planter cradling an overpriced succulent.

The process: I followed this slightly confusing guide from Walk in Love t-shirts. It looks complicated, but it only takes about five minutes. However, note that when they say "cut along the edges of the tee," they means cut along one edge only. Basically, you're cutting up one side seam of the t-shirt, cutting off the top neck and sleeve part, and then cutting the resulting large piece of fabric into eight long strips. I misread the directions and cut up both sides of my t-shirt, so I had to knot my sixteen short strips back into eight long strips, which is why the final product looks a little clunkier than ideal. None of this will make sense until you start doing the project, and that's okay.

The verdict: Extra knots aside, I'm kind of obsessed with this project. First of all, it's incredibly easy. Second of all, I think macrame planters are really cool, especially when done in hot pink, if I do say so myself. Third of all, that little cactus was $4 and it looks so precious swaying in my bedroom window as I write this!

*A word on the world of thrift store t-shirts: the funniest ones tend to be in the men's section.The women's section is a better place to find plain, nicely made t-shirts, but if you're looking for the hilarious shirts that say "Happy Birthday Grandpa Joe U R a Fox," you'll have better luck in the dude's section. Grandmother-y shirts, like the floral one I used, are also fantastic. Warning: you may have to snip out the shoulder pads.

More like this
26 Christmas Outfit Ideas That Will Sleigh The Holiday Season
By Allie Fasanella
Designers Say If Your Home Doesn't Have Any Of These Things, It Looks Outdated
By Claire Epting
Walmart's Pre-Black Friday Sale Is On — And Here Are All The Cool Things Worth Buying
By Kate Marin
Rita Ora’s Sheer Dress & Mermaid-Inspired Prosthetics Stun At British Fashion Awards
By Sophie McEvoy
Get Even More From Bustle — Sign Up For The Newsletter