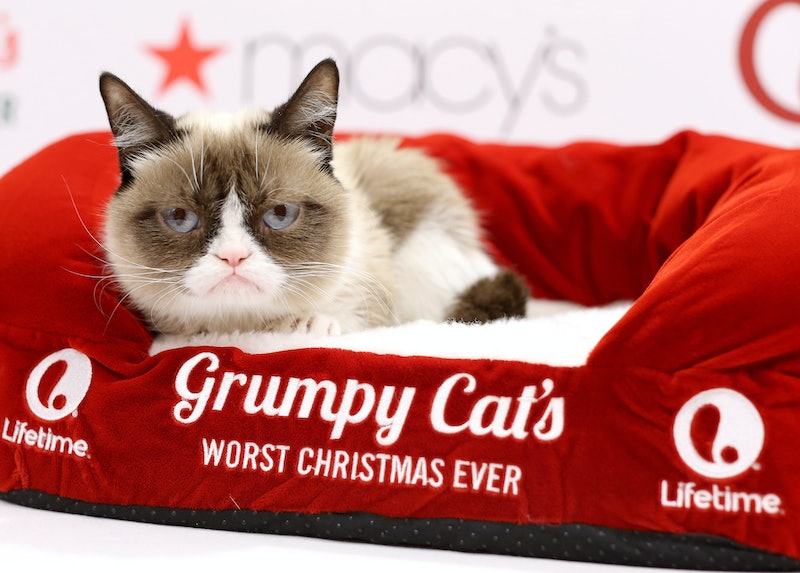 Were you happy when the FCC voted to back net neutrality Thursday? If your sympathies lie with the coalition of activists who fought this cause for years, then the answer is probably yes. For all of those people, a little celebration seems in order, doesn't it? Well, here's a bold idea — why not taunt cable giant Comcast in the skies above its own headquarters? Well, that's exactly what happened Friday — net neutrality protesters trolled Comcast with a Grumpy Cat banner flown from an airplane, and it's a pretty sharp jab.

"But wait," you ask, "who, or what, is Grumpy Cat?" In case you're not much for our modern internet meme-based society, some essential background: Grumpy Cat is a picture of a grumpy looking cat. Or rather, it is a grumpy looking cat — there are plenty of pictures of the lil' girl, in various states of seeming displeasure. And, like basically everything these days, you can even get her on a shirt! Basically, a collection of net neutrality activist groups settled on a classic image of Grumpy Cat for their taunting banner, and footed the bill to get it flying. And thus, the cranky cat hung above the Comcast Center in Philadelphia Friday afternoon.

The banner reads: "Comcast: Don't Mess With The Internet #SorryNotSorry," as clear a victory lap as it gets. And it makes sense that pro-net neutrality groups would be a little giddy at this moment. I can't think of a better example of a seemingly inevitable corporate victory that got thwarted like this. The collapse of the Stop Online Piracy Act (SOPA) back in 2012 was a similar situation, and seems apropos — when it comes to the free and open internet, activists have shown an incredible level of tenacity.

So now, on this rare occasion when something hasn't gone Comcast's way — despite its virtual monopoly over broad swaths of the American cable market, and its efforts to get even bigger by merging with Time Warner — the people who fought so hard wanted to have themselves a little tease. Comcast, for its part, is predictably unhappy with recent events, with executive vice president David Cohen condemning the FCC's net neutrality vote on their website Thursday. But all the stern words in the English language can't stop Grumpy Cat!