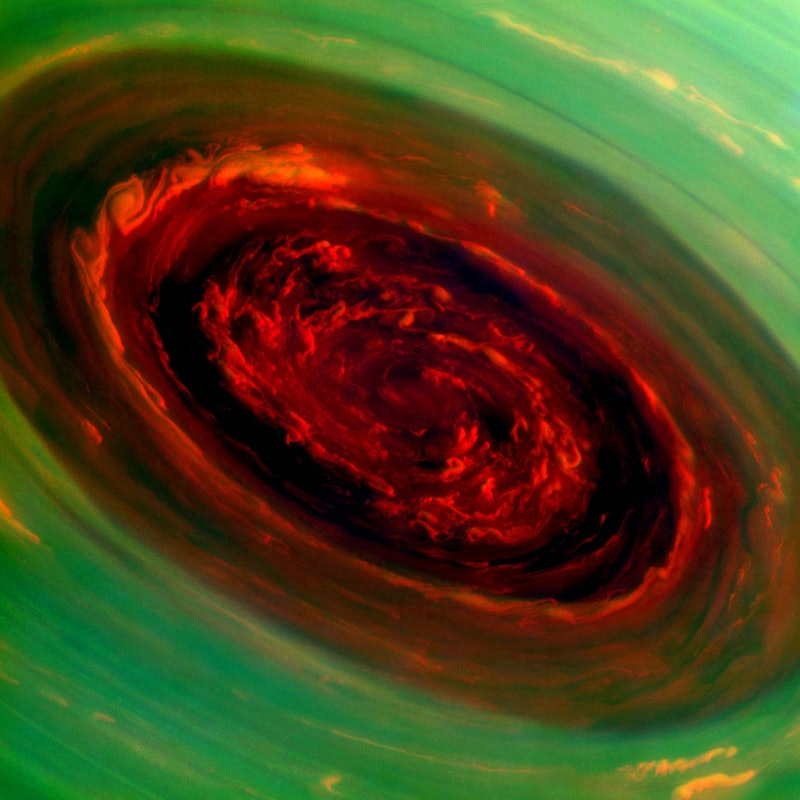 Science fiction may be dropping the "fiction" from the genre name if new research from Cornell University proves to be true. According to scientists at the Ivy League institution, Saturn's moon Titan may play host to an alien life-form that depends on methane, not oxygen, for survival, making them far hardier than Earth's humans. These "aliens" aren't exactly the sort of life forms we would typically think of (though what do we really think of when we're considering extraterrestrial beings?), but evidence is mounting to suggest that we really may not be alone in this universe.

Traditionally, the concept of "inhabitable environments" has centered around the presence of water. That was, after all, the basis of the argument of supporting life on Mars. But now, scientists have taken a less traditional approach, suggesting that water may not be the only substance capable of sustaining biological existence. Rather, Dr. James Stevenson and fellow researchers at Cornell are considering the possibility that pools of methane may support different forms of life that, while unlike those found on Earth, are alive all the same. These lifeforms would be known as "azotosomes," indicating their dependence on nitrogen for survival. Life on Earth, on the other hand, is contingent on liposomes, which compose "the phospholipid bilayer membrane — the strong, permeable, water-based vesicle that houses the organic matter of every cell." And while there is not yet evidence to suggest that these organisms actually exist, Stevenson and his team believe that, in theory, they most certainly could.

Titan, known for its icy temperatures (as it is located 886 million miles away from the sun), is the only known body in our galaxy with bodies of liquid. Though this liquid isn't H20 and there's no oxygen to speak of on Saturn's moon, Stevenson has derived a "theoretical cell membrane that is composed of small organic nitrogen compounds and could survive in a liquid methane environment with temperatures as low as 292 degrees below zero." Pretty snazzy stuff. Or pretty scary, depending on how you want to look at it.

In a statement, Stevenson noted, "Ours is the first concrete blueprint of life not as we know it." And it isn't exactly how we'd imagine it either. The so-called azotosome, supposedly, bears no resemblance to ET or to a little green Martian, but is rather theorized to be about the size of a virus. But even so, this could indicate the start of life that may very well have the potential to grow, much in the same way life grew on planet Earth. Now that Stevenson and his team have the concept in the works, their next step is to determine how exactly these organisms would "behave in a methane environment" to see what exactly "life" in methane would consist of. What would metabolism or reproduction look like for azotosomes, as opposed to Earth-inhabiting organisms?

If all this seems as though it were taken straight out of a sci-fi novel, that's partially because it was, to some extent. Whereas scientists have traditionally thought more inside the confines of the traditional definitions of inhabitable environments and life, the team at Cornell drew inspiration from Isaac Asimov's 1962 essay “Not as We Know It.” Rather than looking for planets and other bodies in space that had signs of water, Stevenson and other researchers branched out a bit further. Paulette Clancy, a chemical molecular dynamics expert, explained that much of this creativity came from the scientists' more diverse backgrounds.

Speaking with The Examiner, Clancy noted,

We're not biologists, and we're not astronomers, but we had the right tools. Perhaps it helped, because we didn't come in with any preconceptions about what should be in a membrane and what shouldn't. We just worked with the compounds that we knew were there and asked, 'If this was your palette, what can you make out of that?'

A lot, as it turns out. NASA already appears to have a mission in the pipeline to explore Titan, further examining the further recesses of space in a search for life. According to a description provided on NASA's website,

Titan is unique in the outer solar system in that it is the only one of the bodies outside the Earth with liquid lakes and seas on its surface. The Titanian seas, however, are not composed of water, like Earth’s seas, but are seas of liquid hydrocarbons. What lies beneath the surface of Titan’s seas? We propose to develop a conceptual design of a submersible autonomous vehicle (submarine) to explore extraterrestrial seas. Specifically, to send a submarine to Titan’s largest northern sea, Kraken Mare. This craft will autonomously carry out detailed scientific investigations under the surface of Kraken Mare, providing unprecedented knowledge of an extraterrestrial sea and expanding NASA’s existing capabilities in planetary exploration to include in situ nautical operations.

Depending on what they find, such an expedition could confirm the theories already set forth by Stevenson's team, proving that there is indeed life beyond Earth, even if it is nearly unrecognizable by the human race.