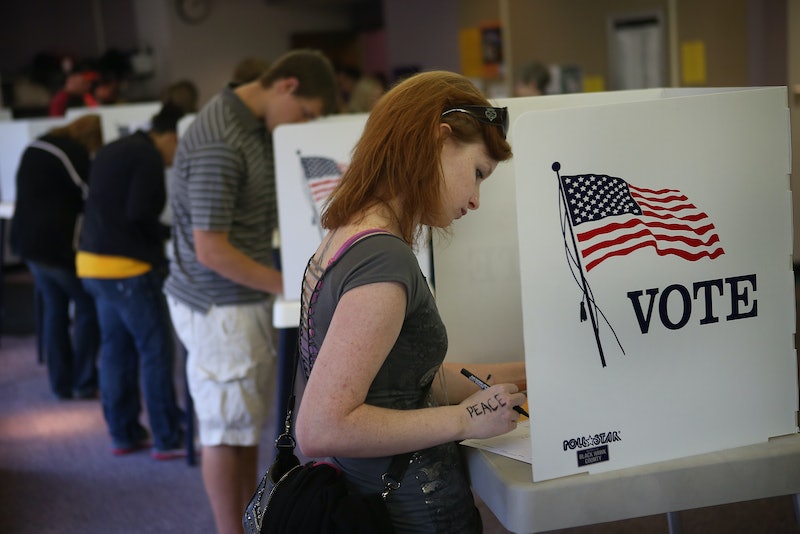 A teenager's "Sweet 16" may currently be associated only with the freedom that comes with being able to legally drive a car, but as per proposed legislation in Brattleboro, Vermont, there could be additional perks associated with that particular birthday. Voters in the Vermont town will decide whether 16 and 17-year-olds should be able to vote in local elections, lowering the current voting age by two years. While Brattleboro teens would still have to wait to turn 18 before voting for the governor of Vermont and president of the United States, local lawmakers are suggesting that the younger age cohort has every right to make decisions at a lower, local level a bit earlier than currently permitted.

While this may seem like a novel development, lower voting ages have actually come up before across the United States, and certainly overseas. Takoma Park, Maryland allows 16-year-olds to vote, and became the first municipality to do so in 2013. Hyattsville followed suit in January of this year, and the Iowa caucuses also allow 17-year-olds to cast ballots. Overseas, on Thursday, David Cameron and Nick Clegg unveiled a new plan that would lower the voting age to 16 in Wales. Though 18 has long been regarded as the magical age at which adolescents become adults, it is undoubtedly a rather arbitrary delineator made more official as a product of time than by science or any real logical reasoning.

So why not lower the voting age?

Since the 26th Amendment was ratified in 1971, turning 18 has been relegated as the point at which young adults are finally capable of making informed decisions regarding politics and other matters requiring the democratic process. Much of the justification behind choosing 18 came from the notion that those who could wear a uniform and fight for the country could surely vote in an election (but not take a drink, apparently). And as valid as this reasoning was (and is), there are a number of problems with waiting until 18 to allow people to vote.

For one, turning 18, for many, also means going off to college, sometimes far away from home. For those who have recently entered new communities in new environments, voting is often the last thing on their minds, particularly when it comes to local and statewide elections that mean next to nothing to a new resident. And if they do choose to vote, it is more likely that these transplants will vote along party lines without having done the due diligence to research platforms and actual voting issues.

On the other hand, a 16-year-old is likely far more embroiled in the local politics of their town or city, being newly free to, quite literally, explore the boundaries of the municipality. As a result, younger teenagers may actually be more engaged and more aware when it comes to local politics, particularly because their local politics are actually their local politics, not the politics of their new college town. Today, with many voting stations located in high schools, students are able to observe the democratic process, but are disallowed from taking part in it. Moreover, according to the Center for Information and Research on Civic Learning & Engagement (CIRCLE), a non-partisan research center on youth engagement based at Tufts University, there is little difference (sadly, perhaps) between the political knowledge held by a 16-year-old and that held by a 21-year-old. And the difference, ostensibly, is even less pronounced between a 16 and an 18-year-old.

Furthermore, numerous studies have also found that voting is a force of habit — those who begin voting young are shown to continue to remain civically engaged throughout the rest of their lives. But many 18-year-olds do not take advantage of their right to participate in government, setting a poor precedent for their continued political lives. Although the 2008 and 2012 presidential elections relied largely on the participation of the younger generation to bring Barack Obama into the White House, in 2014, just 5.2 percent of eligible 18-year-olds voted in California, giving this demographic the lowest turnout rate of all age groups surveyed.

In November 2014, there were 8 million 16- and 17-year-olds in the United States who were not afforded the right to vote. And considering the absolutely dismal turnout across the board for the midterms (especially amongst millennials), we could've used all the help we could get. In countries where the voting age has indeed been lowered to include 16- and 17-year-olds, studies have found that turnout is very high amongst the youngest cohort, supporting previous evidence that suggests that teenagers living at home, engaged with their local happenings, are more likely to visit the ballots on Election Day.

Even from a scientific perspective, there is hard proof to suggest that lowering the voting age to 16 would by no means be the end of the world. As the Los Angeles Times notes, "Adolescents' judgment in situations that permit measured decision-making and consultation with others — what psychologists call 'cold cognition' — is just as mature as that of adults by 16." Of course, in other situations, particularly those that involve emotion and thinking under pressure, a few more years does one good, but when it comes to rational, premeditated decision-making, 16-year-olds are just as good as the rest of us.

So why are they consistently being left out of the picture when it comes to voting?

While the United States has long depended upon tradition for many of our rules and regulations, it may be time for another change when it comes to our political system. It's been over 40 years since we last lowered the voting age. Maybe to honor the occasion, we can lower it again.