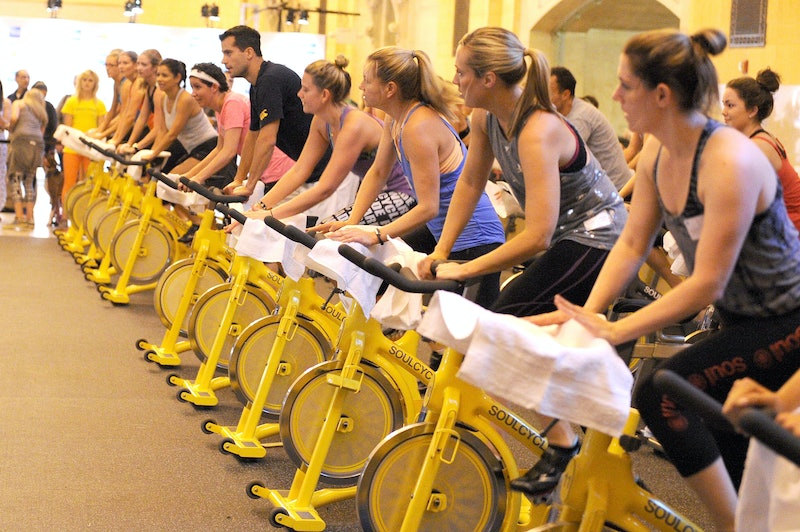 And everyone there is. When I first started going to SoulCycle regularly almost three years ago, the people in the front row might as well have been very svelte robots, they were so intimidating to me; they never ran out of energy, and were constantly screaming out in joy instead of moaning at the torture of it all like the rest of us. They made it look good. But that motivated me — and after many months of twice-weekly SoulCycle sessions, when my my tap backs had some 'tude and I was able to belt out at least five Beyonce lyrics during weights, I decided I was finally front row worthy. The special meaning of the front row — and the discipline it takes to get there — is one of the things that makes SoulCycle so much more than just an exercise class.

According to The Times, some SoulCycle instructors do assign people front row spots, but most of the time, moving to the front row is a decision you make for yourself, when you feel ready to keep up with the SoulCycle superstars. And once you do get there, the feeling that you are a leader, a guide, and the very best, is an energy rush all on its own. So has the time come for you to move to the front? Here are 17 signs that you are totally ready to sit in the front row at SoulCycle.

1. You Can Anticipate The Instructor's Every Move

When the instructor says "Tap it," you're already back. You are totally in sync. It is basically like you are one person. One really sweaty person.

2. You Can Sing Along To The Songs While Everyone Else Is Gasping For Air

It takes time to build up the kind of strength and stamina that you need in order to not be completely out of breath after a major sprint or climb. But since you go at least once a week, your body can sprint, climb and then flawlessly belt out a verse of Gwen Stefani like it's nothing.

3. You Know The Names Of All The Desk Staff At Your Studio

These are your people. Because you see them more often than you see your actual friends and family.

4. The Instructor Personally Greets You In Every Class

I mean, you don't want to say you're their favorite, but it's pretty clear.

5. When The Instructor Says The Class Is Killing It, You Know They Mean You

Because you are totally in sync, which is what SoulCycle is really about.

6. You Take Your Role As A Front-Rower Very Seriously

Especially when the instructor says that the other rows should look to the front for guidance. If you aren't perfect, then what will the people behind you do? Look at the instructor, or the people on their sides? Come on!

7. Everyone Looks At You With Awe

Or, at least, you think they do.

8. When The Person Next To You Is As Good As You, You Feel An Instant Connection

You are no longer a lone wolf. You are in this together.

9. And If They're Better Than You, You Like Them Even More

...because they make you work harder. Ugh, they are so fast and strong! They're tap backs are so smooth! Did the instructor just wink at them? Must! Go faster!

10. Sitting Next To Someone Who Is Completely Off-Beat Fills You With Rage

See, some newbies believe that if you are new, you should be as close to the instructor as possible. Which is not illogical, actually — being closer can give you a better view of the moves. Except they don't know that sitting in the front row at SoulCycle on your first or second class because you did a spin class once is like auditioning for a Broadway show because someone told you you could carry a tune.

11. You Definitely Invited Your Instructor Over For Thanksgiving

Because you want your family to meet the most important person in your life, duh!

12. You Are A Walking Billboard For SoulCycle

You can't help it. You just have so much love for it.

13. You Are The First One Up After Every Song

14. You Can Chug Water While Cycling

Sitting down to drink water? What are we, at a tea party? We are on the road!

15. You Wish The Weights Section Was Longer

Who needs to have any feeling in their arms the rest of the day anyway?

16. You're Cheering When Everyone Else Is Passing Out

Hmm, I guess some of these people don't come to SoulCycle three times a week? Weird.

17. You Feel Pressure To Be Absolutely Perfect

...but you know that even on an off day, you're better than most. And that's why you belong in the front row, baby!

More like this
11 Benefits Of Cross-Training
By Carolyn Steber
Lance Bass Says This Workout Machine Has Changed His Life
By Kaitlyn Wylde
6 Full-Body Tabata Workouts, Straight From Trainers
By Carolyn Steber
4 Most Outspoken Zodiac Signs
By Kristine Fellizar
Get Even More From Bustle — Sign Up For The Newsletter