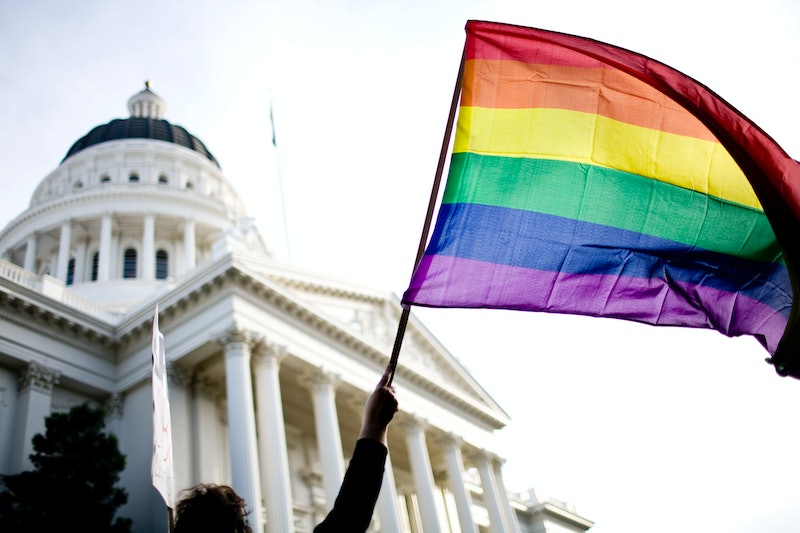 On Tuesday, Feb. 24, the Indiana State Senate passed Bill 568, the state-level Religious Freedom Restoration Act. This legislation is equivalent to its federal namesake, also known as The Hobby Lobby Law. Its alleged intention: “to prevent laws that substantially burden a person's free exercise of religion.” Essentially, it means that, while freedom of religion is one of our unalienable rights, freedom to be a minority is not. Because it “burdens” another person’s religious beliefs.

Consider the Christian baker in Colorado who refused to bake a wedding cake for a gay couple; he cited their lifestyle as against his religion. After much public litigation, the court eventually ruled that the baker illegally discriminated against the gay couple. But in Indiana, State Bill 568 would protect the rights of the baker.

This issue is personal to me. I'm a gay Hoosier. I grew up and came out in Indiana. As you can imagine, Indiana wasn’t, and sometimes still isn’t, the most pleasant of residential places for gay, lesbian, bisexual or transgender individuals. Over the years, Indiana has actually managed to progress, albeit kicking and screaming; in 1977, before I was just a twinkle in my grandmother’s eye, the state decriminalized homosexual activity (clap, clap). Twenty years later, in 1997, Bloomington, Indiana began recognizing civil unions; a few scattered counties followed suit. And then, on Oct. 6, 2014, gay marriage in Indiana officially became legal when the Indiana Supreme Court refused to further deliberate the Baskin v. Bogan case.

Let’s consider the language of State Bill 568 again: it's intention is “to prevent laws that substantially burden a person’s free exercise of religion.” But don’t be fooled by the adverb “substantially” — which is immeasurable — or by the noun “burden,” which, in this case, is being used for dramatic effect. It’s all legislative rhetoric to serve the bill’s chief benefiting demographic — middle-class, white (86.3 percent) Christians.

Over the years, many bills of such controversial nature have relied upon similarly covert language: Texas’ current “Voter ID Law” requires “approved” identification to be shown in order for one to vote. But the “approved” ID materials are difficult for many citizens to obtain. Currently, over 600,000 Texans are unable to vote because they lack the “approved” documentation. And then there was New York’s infamous “Stop and Frisk” law – legislation that left it up to a police officer’s discretion to determine how “reasonably suspicious” an individual’s public behavior was. Since 2002, there were over 5 million instances during which members of the NYPD put “search and frisk” procedures to use. Approximately, nine out of 10 of those stopped were from a minority community and found completely innocent.

Here’s what the language of The Religious Freedom Restoration Act really means: “burdening” a person’s religious practices/beliefs in this case refers to presenting them with a belief/practice that they are either unfamiliar with or — let’s be honest — afraid of. The bill would give a corporation or business owner the right to deny their goods and services to, say, oh, a newlywed same-sex couple because the couple’s marriage “burdens” the religious beliefs of said corporation or business owner.

So, are there any reverse laws protecting the rights of LGBT Hoosiers? Jennifer Wagner, Communications Director for Freedom Indiana, tells Bustle, “LGBT Hoosiers currently are not protected from discrimination under Indiana law, though a number of Indiana cities have passed more encompassing human rights ordinances that offer some protections. [State Bill 568] would eliminate those local protections.”

Not only are LGBT Hoosiers not protected from discrimination in Indiana, under State Bill 568, those doing the discriminating are.

On Monday, Feb. 23 — a day prior to the vote — members of both Indiana State Senate parties presented their arguments either for or against the bill. According to The Indianapolis Star, State Sen. Karen Tallian (D-Portage) referred to the legislation as conservative backlash for last year’s legalization of same-sex marriage; she then further warned Indiana State Senate members that passing it could open up a proverbial Pandora’s box of discriminatory issues and consequences. Members of any minority community could fall victim to the bill.

Wagner echoes this sentiment: “This legislation would have unintended consequences that will create costs and confusion for businesses and government. The perception that these laws are intended to enable discrimination will hurt businesses’ ability to recruit and retain top talent.”

But Micah Clark, Executive Director of the American Family Association of Indiana, maintained in an AFA podcast prior to the state vote that the bill would simply serve to protect those with strong religious beliefs. His statement was later reiterated in the pre-ballot debate by Sen. Scott Schneider (R-Indianapolis, bill co-author), who asserted the legislation would only serve “as a shield and not a sword.”

Approving some religious claims while deeming others unworthy of accommodation could be "perceived as favoring one religion over the other."

There couldn’t be a truer statement. Wasn’t such exclusive accommodation for Hobby Lobby an intrusion on the rights of their female employees? Isn’t denying services or goods to individuals whose lifestyle you don’t agree with based on religious belief, still an act of intrusion into their private lives – somewhere a business owner has no more business being than said individual does in the business owner’s house of worship?

But there are things Hoosiers can do to continue to fight the bill. “We are hosting a faith vigil on Wednesday night [March 4] in Indianapolis to show opposition to this bill," Wagner says, "and we are encouraging Hoosiers to contact their local lawmakers to let them know we do not need this law on our books. Once we know where the bill is assigned, Hoosiers can contact those committee members to let them know this should not move forward.”

You can support Freedom Indiana by liking them on Facebook and following them on Twitter. Other groups — including the Indiana Chamber of Commerce and the ACLU — have also spoken out against the RFRA.

No matter the level at which it’s imposed, the Religious Freedom Restoration Act is simply one giant government loophole big enough for all sorts of extremist, chauvinist, maniacal cases to stroll through. Let’s hope (and, if you want to, pray) that Indiana State Bill 568 dies in the House.