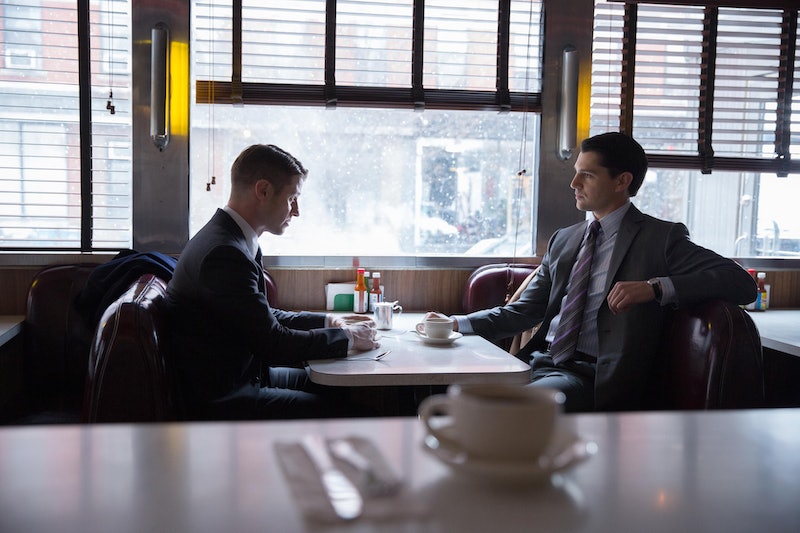 We've seen a lot of shake-ups on Gotham, but the drive towards the Batman universe we know and love is still slow and steady. However, could we see Detective Gordon become Gotham's police commissioner before the first season is over? Of all the milestones in this caped crusader prequel, I think that one is the most likely to appear early in its run. Someone call Ben McKenzie and tell him to start growing out his mustache so that he can achieve that signature look. According to the TV Guide description for Monday's episode titled "Everyone Has A Cobblepot," Gordon is investigating a controversy with Gotham Commissioner Loeb. If the episode ends with Loeb getting fired, the Batman mythos might take a giant leap forward. According to the photos, it appears that he'll ask the help of known "ally" Harvey Dent.

In the comics, Jim Gordon is usually either already the Commissioner or transfers from another city's police department to fill that role. There is only one incarnation of the character, the earliest in fact, that has him as a police detective. Also — did you know that Gordon's middle name is "Worthington"? How has Harvey Bullock not made fun of him for that?

As I mentioned above, currently on Gotham, the role is filled by Commissioner Loeb. Again, this would stray from the comics if Jim were to take the job soon, as Gordon succeeds Commissioner Grogan. On the show, Loeb and Gordon are already at odds. Jim threatened him, tried to extort him, and then the Commissioner fired back by taking credit for Gordon's arrest. It's all fun and games at the GCPD. Unlike Sheriffs, who serve a similar function on a police force, the Police Commissioner is not an elected official. He or she is appointed by the Mayor. Since we know the current Mayor on Gotham is bad news, it seems likely that Commissioner Loeb is corrupt as well.

The only roadblock is Sarah Essen, who is heading the Gotham Police Department as Captain. Why would Gordon be chosen as Commissioner over Sarah Essen? I think Fish Mooney, Barbara Kean, and Selina Kyle have proven that as despicable as Gotham City is, it isn't necessarily sexist in a traditional way.

The answer might be the relationship that Detective Gordon is cultivating early on with Harvey Dent. As Assistant District Attorney, the future Two-Face is a powerful player already. Gordon's father, as Loeb pointed out, was Attorney General. So you see, the pieces are already in place for Detective Gordon to make this leap without necessarily having the experience or qualifications.