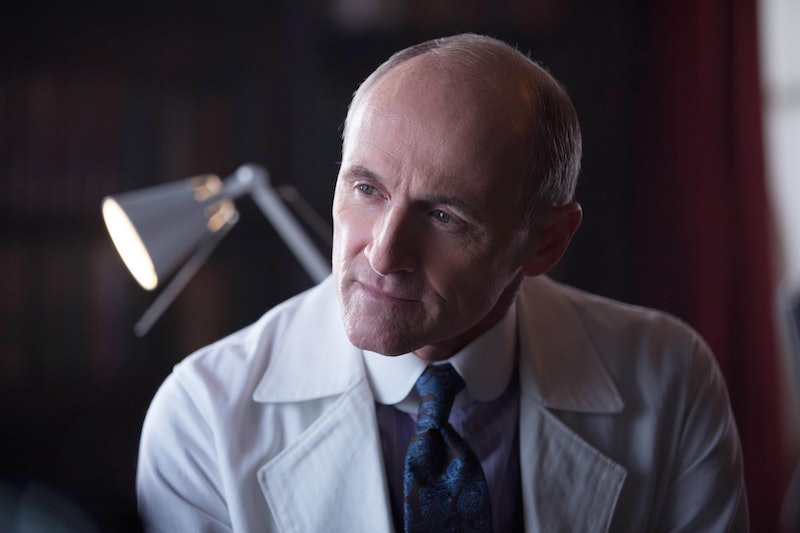 Is it just me, or is it getting kind of hard to keep up with all of the villains on Gotham? It feels like the criminal masterminds are starting to outnumber the regular citizens of the city. On the episode that airs March 2, "Everyone Has a Cobblepot," we'll meet yet another member of the Gotham rogues' gallery. This one is Dr. Dulmacher, another baddie looking to team up with Fish Mooney. So many of the Gotham villains are comic-book faves — what's the deal with the doctor? Is Dr. Dulmacher from DC Comics, or was he invented for the show?

Regardless of origin, he is certainly creepy. Dr. Dulmacher is played by Colm Feore, and he's no stranger to villains and antagonists. It seems like his characters are always lusting after some kind of power. He played Randall Flynn, the Assistant Secretary of the Department of Defense, on Revolution, and the wannabe-pope Giuliano Della Rovere on The Borgias. But my absolute favorite power-monger of his so far — and by far — is the Lord Marshal from The Chronicles of Riddick. Though he's perhaps better recognized as this attractive fellow from Thor (no, not Tom Hiddleston — we all wish).

*Shudder.* That is a hard face to look at. So, is Dr. Dulmacher going to follow in those frosty giant footsteps, or does he have a different M.O.? The truth is, we don't know yet. Dr. Dulmacher is an original creation for Gotham, and not (entirely) from the Batman comics. However, his possible alias, The Dollmaker, may be a little bit more familiar. "While Dulmacher himself is original to Gotham , there have been three other Dollmakers in DC Comics history, including a Batman villain who bears more than a passing resemblance to this version," ComicBook.com reports. "Whether Dulmacher is the replacement for Barton Mathis in this continuity or just his precursor remains to be seen."

Who is Barton Mathis, you ask? TechTimes gives a brief primer: "After a traumatic childhood of abuse at the hands of his father (who was also a serial killer — and a cannibal), [Mathis] becomes a serial killer in his own right. His modus operandi is to take the body parts and skin of his victims and fashion them into 'dolls.'" Um, yuck.

Think you've heard of this "Dollmaker" before? Gotham seeded his arrival very early in the series. "The Dollmaker should sound familiar because this bad guy was mentioned waaaaaaaaaay back in episode 2, 'Selina Kyle,'" Entertainment Weekly notes. If Dr. Dulmacher and this Dollmaker are in fact the same villain, which is extremely likely, let's hope he's stopped soon.