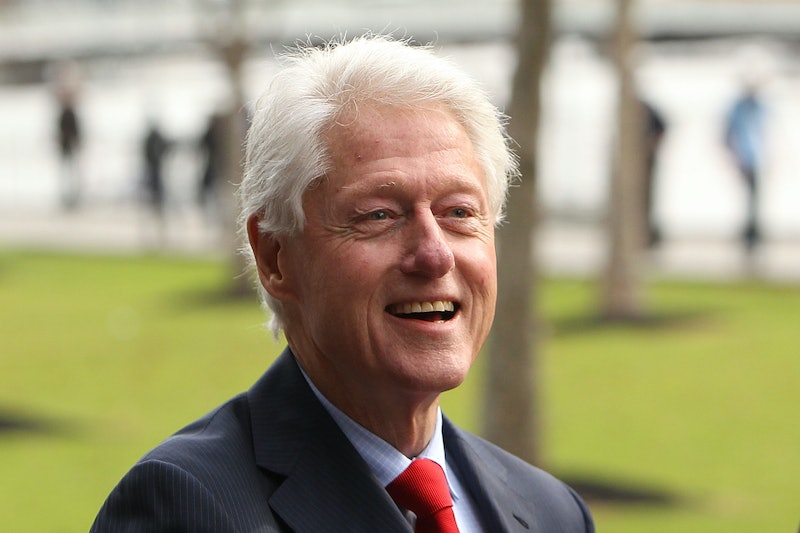 Yes, your mind was blown by #TheDress that overtook the Internet last weekend, but like most Internet sensations, it was quickly replaced by another blue dress illusion. There's a hidden dress in Nelson Shanks' portrait of Bill Clinton, symbolizing the Monica Lewinsky scandal, which now hangs in the National Portrait Gallery. Basically, no one will ever be able to look at a blue dress the same after this week. Plus, the widespread attention the painting is attracting may have deeper connotations for the Clintons.

The 77-year-old painter revealed his sneaky technique in an interview with the Philadelphia Daily News, admitting that Clinton was the hardest subject he's ever painted and calling him "the most famous liar of all time." In the painting of the former president standing in front of the Oval Office's fireplace, a shadow runs from the mantle to the floor alongside Clinton. Says Shanks:

He and his administration did some very good things, of course, but I could never get this Monica thing completely out of my mind and it is subtly incorporated in the painting.

According to Shanks, the Clintons hate the portrait and want it removed from the National Portrait Gallery in Washington D.C. — but the gallery denies this. Regardless, it wouldn't be surprising that the couple would dislike a painting that commemorates the dark blemish on Clinton's presidency. Sure, it's entertaining that this hidden aspect of the 2006 portrait wasn't revealed until now, but the attention it's receiving highlights the fact that Bill and Hillary still can't shake the scandal.

With all of us waiting on the edge of their seats for Hillary's presidential announcement (fingers crossed!), it's disheartening to see that her husband's past apparently follows her wherever she goes. While Lewinsky may represent a shadow over Bill, Hillary should be judged for her own shadows, not her husband's. It's been more than 15 years — let's move on.