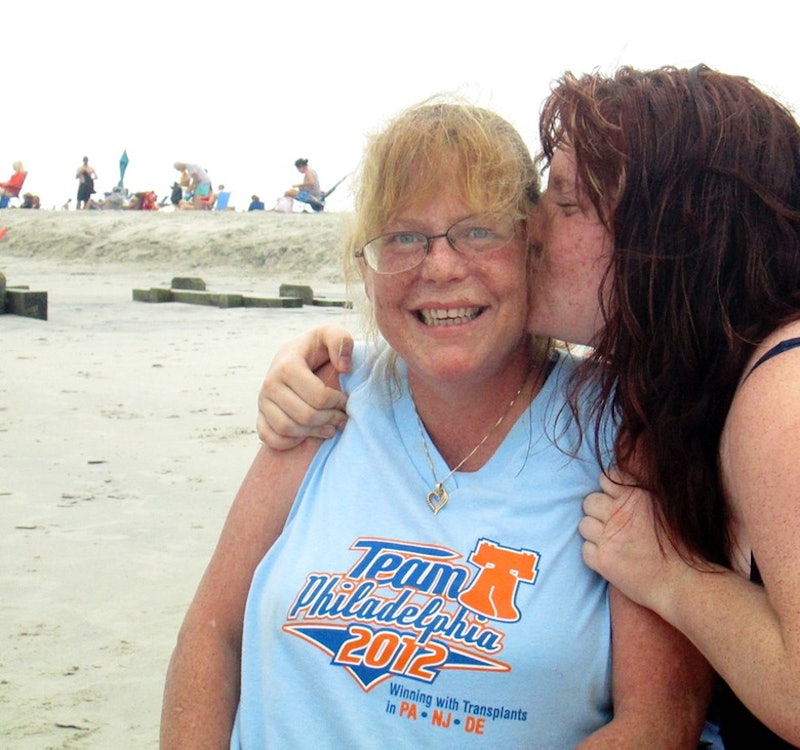 Growing up, I always knew that my mom was different . In some ways, her uniqueness was a trait that my friends envied. They were jealous of the way that sometimes, we would be driving to the supermarket, spot a blimp in the air, and then suddenly find ourselves taking a detour to the local airport to watch it land. They wished that their mothers would spend lazy summer afternoons with them in the pool playing Barbies and making virgin strawberry daiquiris, the way my mom did. When my mother was feeling sunny and present, she was patient and kind, spending hours on the phone with me at college while I had panic attacks, or teaching me how to play gin rummy.

But sometimes, that warm, caring mom went away. Without warning, she'd be replaced by a cold, distant clone. The clone looked like my mom, sounded like my mom, wore the same perfume as my mom — but it did not feel like her. Her body was there, but mentally, she was had "gone away."

When my mom "went away," it meant that the house would be full of silence so tense that you could barely breathe. It meant unpredictable outbursts directed towards me and my father. It meant that my mother would lament to me that she was "raising a monster." It meant that I would count the seconds until my father came home from work, so we could discuss mom's mood swings in hushed tones. My father and I gave my mother the nickname "Sunshine," because some days, her personality could light up an entire room. But like sunshine, she could become clouded over at a moment's notice. When this happened, we would walk on eggshells around her as we patiently waited for "Sunshine" to return.

When I was a little girl, I couldn't understand why, every few months, my mom would sleep on that couch all day for several days straight. The curtains would remain drawn and we both stayed in our pajamas all day. When she went through these periods, no one would be allowed to touch her. When I attempted to snuggle, she would visibly flinch, as if something grotesque was approaching.

At other times, her anxiety dictated our days. Many times in my childhood, midway through a regular shopping trip, the color would drain from her face. Her hands would tremble, sweat beads would run down her forehead, and we would have to drop everything and leave. I would repeatedly ask what was wrong. She would shake her head and beg me to be quiet as we sat in the car. After several minutes of hyperventilating and waiting for the pill she popped to kicked in, she would mumble that her tummy hurt. A decade later, I learned that those shopping trips were being interrupted by the severe panic attacks that plagued my mother.

As I got older, I developed a sixth sense about when the tides were about to turn. When the light behind her eyes began to flicker, and our typical dinner conversation was replaced with quick jabs of hostility, it was my cue to take cover. I would sleep over my best friend's house, or stay in my room and wait it out — whatever it took to protect myself until my mother's sunshine was beaming once again. But sometimes, there was no warning.

Unlike my mother, my dad never denied me hugs, kisses or snuggles. It could not have been easy for him to deal with a Jekyll and Hyde wife, plus a little girl wondering why doesn't mommy love her today. “Things will get better," he'd promise me. "Mommy's just not feeling that well. She'll come back."

We became pros at crafting excuses for her family functions, on days when mom's sunshine was nowhere to be found. Under no circumstance was anyone to know about the screaming matches or tears shed behind our closed doors. By the time we arrived at our destination, our smiles were to be in place and our eyes dry. No excuses.

Because my mother's problems were shrouded in secrecy, no one really had any idea of her dual personality, or how it impacted our existence. To the outside world, she always appeared be a consistent, doting mother. When she is "on," my mom is the life of the party. My father and I sometimes stand back and observe the magnificent show of charm she is able to put on for outsiders, knowing that less than hour earlier, we were attempting to defuse one of her meltdowns. At times, this has caused us both to question our sanity and reexamine our reality.

Things became even more complicated when I was 12, and my mom was diagnosed with heart disease. Our family was now forced to deal with both her moods swings and the repercussions of her strokes and heart attacks, which changed her life forever. As her health declined, the periods of time when my mom was "with it" became fewer and farther between.

Because of my mother's struggles, I have been extremely vigilant about maintaining my own emotional health. When my depression and anxiety peaked during college, I began working with a psychologist to sort through my feelings. To this day, therapy has been vital in helping me maintain my overall health. Although she supports and acknowledges my work in therapy, it is not something my mother partakes in. You cannot make someone get help.

These days, it is no secret that my mother is tempting fate. Doctors have repeatedly warned us that her next heart attack or stroke will either put her in a nursing home or kill her. The warnings fall on her deaf ears, and do nothing but add ulcers to my stomach. Through the haze of cigarette smoke that fills the dark basement where she locks herself for most of her "bad days," I attempt to muster up words of encouragement. But the years have proved that when she's in that frame of mind, nothing will ever empower my mother to snap out of it.

My mother's aversion to mental health care has left a lot of questions unanswered. I feel like our family almost has a fear of having an actual label or title applied to my mother's condition, because it would make it an actual, concrete problem. In my family, the status quo is to not really acknowledge a problem unless someone is almost dying on the kitchen floor. But watching how my mother's persistent avoidance of the issue has eroded the foundations of so much of her life has fueled my commitment to be open and honest about my emotional health.

Would a name or explanation for my mother's problem, which has ruled my family's existence for my entire life, be comforting? Absolutely. Would it change anything? Not at all. A diagnosis only makes a difference if the person is willing to participate in treatment.

At 25, I have spent almost half my life praying to a higher power to spare my mother from a health catastrophe. These days, my prayers have turned into the silent pleas that the damage from her next health crisis be minimal and if not, that she may be released from her internal demons.

Sometimes, it feels as if maybe this whole thing — the mood swings, the "going away" — was in my head. Even close family members would be shocked, and even skeptical, if they read this essay. That is how skilled we have become of hiding the dysfunction. But then the "bad days" happen, and a flashback from my childhood stops me dead in my tracks. I know that it was, and is, real.

For years, I tried to find accounts of family situations that were similar to my own, to no avail. Speaking out about this is difficult, of course. But by finally opening up, I hope that another child coping with a dysfunctional family situation can learn that they are not alone in their emotions. This essay is for all the children who beat themselves up for not being good enough to make their parent "better."

Despite being a grown woman leading a full life of my own, the periods of time when my mother retreats inward and "goes away" still hurt. The times where I lean in for a hug and watch her body tense, as if she was bracing for the impact of a brutal fall, continue to sting. Those are the days when my heart aches and I wish that the mom who texts me to let me know that it is National Bagel Day, the mom who packs me leftovers to take back home when I visit, would come back. The mother whom I know loves me more than herself. My mother has always been the brightest source of sunshine, warmth and love in my life. Which is exactly why it hurts so much when her sunshine goes away.