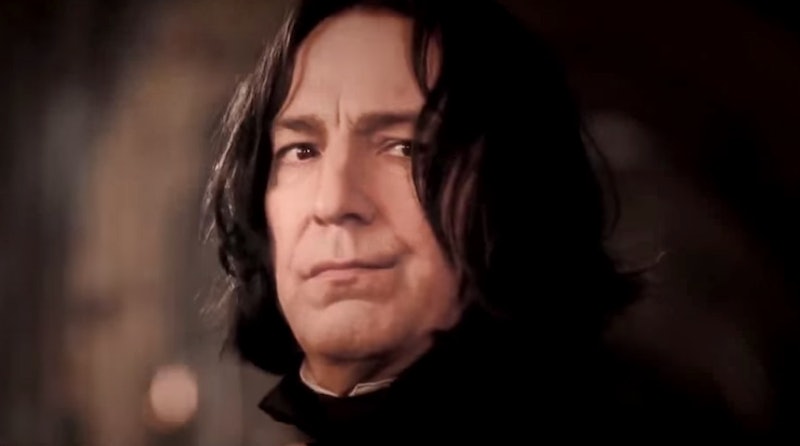 Severus Snape is easily one of the most heavily debated characters of the Harry Potter series. But in an effort to resolve the question of whether Snape is a hero or not, BuzzFeed has gone ahead and put the issue to a vote. And so far it seems that the popular consensus is yes; more than 80 percent of people who have taken the poll so far think that Snape is, in fact, a hero.

Far be it from me, of course, to argue with more than 30,000 people who have already cast their "yes" vote, but I have to say that from where I'm standing, the issue is more complicated — as we probably would have seen had BuzzFeed's poll included more options than simply "Hero" or "Not Hero." Snape is not only a complex character, but plays a complex role, much like many of the people in JK Rowling's iconic series.

Harry Potter is a series about good and evil, but few if any of its characters fit neatly into good and evil categories. Draco Malfoy, for instance, is mean spirited and aligned with the bad guys, but he also balks when asked to do something truly terrible. Sirius Black, though obviously a good guy and one of the people Harry loves most, still has his own prejudices and blind spots, and lets pride get the better of him more than once. Even Dumbledore, the supposed wise leader and representative of all that is true and good, has a much more morally gray backstory than one might expect — plus an alarming blasé attitude about students getting into potentially deadly situations while at school.

And yet when it comes to complexity, Snape easily surpasses all of them. He had a difficult childhood, but he also made the choice to become a Death Eater and thus help enable killing thousands of people. He eventually became a double agent and supported Dumbledore, but he only did so when he had something personal at stake. He loved Lily Evans, but he also drove her away. He fought against the man who killed her, but he also did his level best to make her orphaned son miserable. Yet, ultimately, the fight against Voldemort probably would have failed without him.

So how do you possibly classify such a person?

It really depends on your criteria. If you're going by Snape's overall impact on the fate of the wizarding world, he should be considered a hero. If you judge by his motivations he probably shouldn't. Not to mention his behavior at pretty much all times when he's not fighting Voldemort definitely should not be held up as heroic.

Overall, understanding Snape and his place in the Harry Potter series is a lot more difficult than sorting him into the hero/not hero camp, and that's a good thing. Because as the books shows us, fights between good and evil are not about pitting perfectly good heroes against perfectly evil villains. It's not even about pitting flawed heroes against potentially understandable villains. Life is so much more complicated than that, and it's not always easy to see where the lines are drawn. Which is why it's probably best to not look at the lines at all.

If we want to classify Snape, my vote would be for something along the lines of anti-hero, someone you root for even though their actions and motivations are not what we might call heroic. But really, the important lesson Snape can teach us is not that morally complicated people can be heroes, or that they can't be, but rather that someone can do good without being good; that loving someone doesn't excuse your behavior but it also does mean something; that doing the right thing doesn't require to you have the right motives; and in short that there are levels of nuance that you can't just ignore in a quest to categorize everything.

So is Snape a hero? Honestly, that's the least interesting question about him.