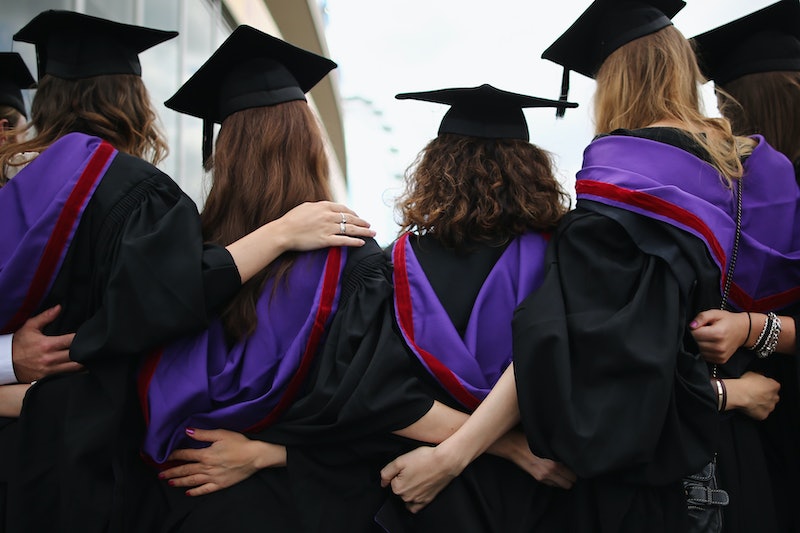 There's rarely good news when it comes to student loan debt, but college students and graduates won a small victory last week. The U.S. Department of Education announced Friday that it's ending its relationship with five major debt collectors who misled borrowers trying to repay their debts. Debt collectors were already universally disliked, but lying to borrowers about their options makes it so much worse.

After reviewing private collection agencies, the Education Department will stop working with five companies who gave borrowers inaccurate information, and the department will better monitor and guide the agencies that collect federal student loan debt. The reviews uncovered that certain collectors were misleading borrowers who had defaulted on their loan payments about the loan rehabilitation program, which benefits defaulted borrowers after they've made nine on-time payments in 10 months. They also gave wrong information about benefits to borrowers' credit reports and the waiver of certain collection fees. In the press release announcing the decision, Under Secretary Ted Mitchell says:

Federal Student Aid borrowers are entitled to accurate information as they make critical choices to manage their debt. Every company that works for the Department must keep consumers' best interests at the heart of their business practices by giving borrowers clear and accurate guidance.

Because debt collection companies make so much money off of people's loans, it's crucial that the Department of Education properly manage its contractors. Pioneer Credit Recovery, one of the most prominent collectors under scrutiny, is owned by Navient Corp., formerly known as Sallie Mae, which has been criticized by student loan activists for years. Currently under investigation by the Consumer Financial Protection Bureau, Pioneer Credit Recovery made $127 million from its contract with the Education Department in the past two years, according to its annual report to investors.

The other companies are: Coast Professional, Enterprise Recovery Systems, National Recoveries, and West Asset Management. The Education Department will reassign their accounts that are not already in repayment to to other collectors and increase monitoring of these companies to ensure that students who are already repaying with them are not misinformed.

Student loans have become a widely debated topic, as 40 million Americans now have student loan debt and more than 7 million borrowers are in default. Although eliminating student debt would be ideal, better oversight of collection agencies is an important step toward improving the problem. Misleading borrowers in default only makes it harder for them to get out of debt, and when this happens nationwide, the issue intensifies. Student loan borrowers aren't in the clear yet, but at least this lying will stop.

More like this
Which Cast Member of 'Westworld' Season 4 Has the Highest Net Worth?
By Meg Walters
This 'Sex Education' S4 Update Is Everything You Were Hoping For
By Bustle UK
25 Things I've Reduced My Life To, In Addition To WFH In My PJs
By Ginny Hogan
7 Things We Learned From Rebekah Vardy's First Post-WAGatha Christie Interview
By Sam Ramsden
Get Even More From Bustle — Sign Up For The Newsletter