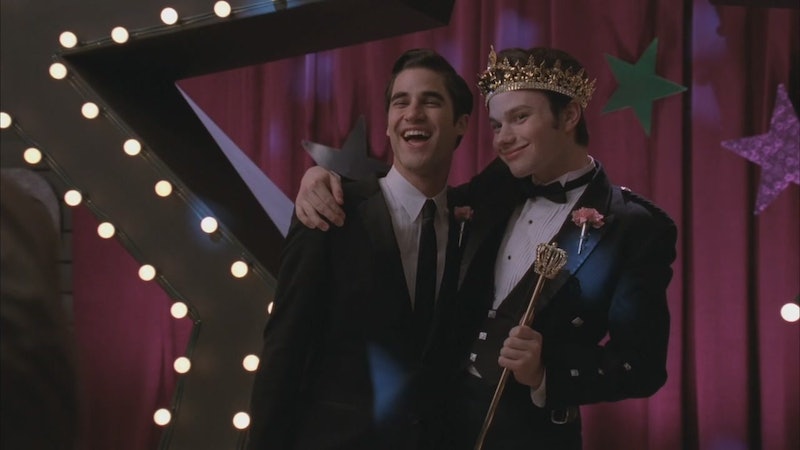 There's no doubt that there have been a huge amount of positive steps taken by movie studios and TV networks to include more LGBT content, but according to two just-released studies by GLAAD, it looks like there is still plenty of progress to be made, especially in the television world. The organization's 7th annual Network Responsibility Index, which rates LGBT content on TV networks, reveals that during the 2012-2013 TV season, not a single station produced LGBT plotlines worthy of an "excellent" rating. The representation of LGBT characters fared little better, according to the the 18th annual Where We Are on TV report, which found that less than 4 percent of series regulars were LGBT.

FOX fared best, thanks in large part to the LGBT-friendly Glee. A relatively impressive 42 percent of the network's primetime programming hours included LGBT content, including out contestants on shows like So You Think You Can Dance, American Idol, and MasterChef. This is a huge improvement from FOX's past history with LGBT content; as recently as 2007-2008, only 4 percent of their programming featured LGBT storylines. It's fantastic that the numbers have jumped so high, but it also warns that they could easily go back down again, as soon as Glee or Bones goes off the air.

ABC came in second place, with 33 percent of inclusive hours. From Modern Family to Grey's Anatomy, the network has made a commendable effort to produce shows with LGBT storylines. Still, with the cancellations of several of their LGBT-friendly shows (Happy Endings, Malibu County), ABC is set to lose many of those hours, unless they introduce shows with equally progressive content.

The CW, and NBC both received "good" ratings, with 28 and 29 percent of inclusive hours, respectively. CBS was the broadcast network with the most room for improvement, a title that doesn't come with much surprise; the network has frequently been under fire for derogatory jokes and one-dimensional LGBT characters. Last season, only one scripted series, The Good Wife, features an LGBT character.

There is some positive news, however; cable networks made significant progress last season in showing LGBT content. ABC Family had a great 50 percent of LGBT programming, thanks to shows like Pretty Little Liars and Bunheads. The study wasn't able to include the very LGBT-friendly The Fosters, so it can be expected that next year's report will be even better.

MTV and Showtime both received "good" ratings, while FX, HBO, TLC, TNT and USA were all deemed "adequate." TBS and the History Channel were both called "failing," with 10 percent and 0 percent of LGBT-inclusive hours, respectively.

The report mentioned Netflix only in summary, but hopefully, they'll give the new TV platform more focus next year. Thanks to LGBT-friendly shows like Orange Is the New Black, House of Cards, and even Arrested Development (Tobias is... curious), Netflix could easily be the most inclusive network of all the broadcast, cable, and online stations.

GLAAD's second report, Where We Are on TV, forecasted a decrease in LGBT characters in the 2013-2014 season. Only ABC and FOX will see increases this year, with 5.4% of their shows' characters being LGBT. NBC takes last place with a pathetic 1%. To put that in perspective, that's 2 out of 203 characters.

In some good news, GLAAD predicts that this season will have an equal amount of male and female LGBT characters, and will also include, for the first time, one MTF transgender lead character. That number may be small, but it's bound to have a huge impact on LGBT representation on TV.

On the cable networks, the outlook is slightly better. HBO will feature the most LGBT characters, at 11, and Showtime follows with 8. Shows such as The Fosters, Orphan Black, and The Killing will continue to feature or introduce LGBT characters, making cable, overall, a relatively inclusive environment.

The results of both studies are fascinating, and they paint a clear picture of what the television landscape is like for the representation of LGBT people: not great, but (mostly) slowly improving. They also shed some interesting light on Netflix, a quickly growing network that's significant for more reasons than just allowing viewers to binge-watch Breaking Bad. Its slate of original shows may be small, but thanks to complex, three-dimensional LGBT characters on shows like OITNB and House of Cards, the network is quickly developed a reputation of inclusion. Here's hoping that other stations follow suit.