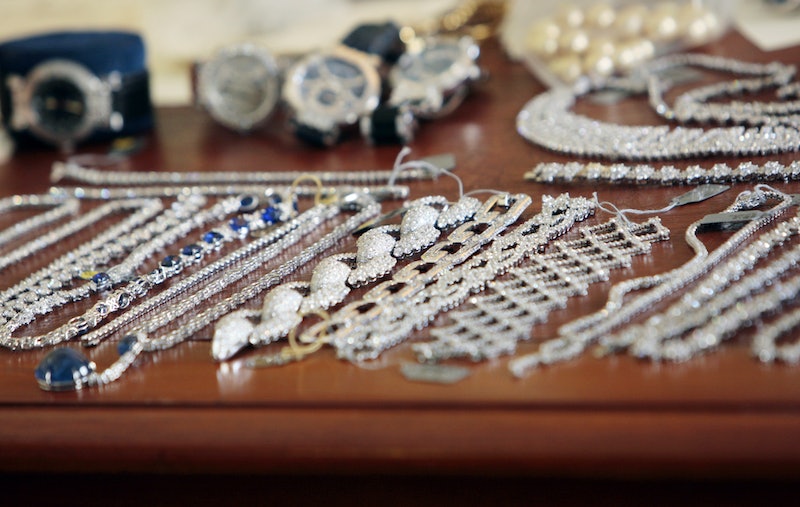 Like a scene straight out of one of the Ocean’s Eleven movies, a group of thieves holds up a Parisian jewelry store and walks away with millions of dollars-worth of jewels. Unlike the films, however, these high-end robbers aren’t getting away with their crime. Responsible for one of the largest jewelry heists in history, eight people were convicted on February 27 for stealing $113 million worth of Harry Winston jewels. The robberies took place between 2007 and 2008 at the famous jewelry shop in Paris, France.

During the 2008 robbery, three armed men dressed in wigs and women’s clothing walked into the Harry Winston boutique near Champs-Elysees and took diamond rings, necklaces, and watches totaling $92 million. The crooks threatened the store employees and reportedly hit some in the head before taking off. In a time span of 20 minutes, the men took 297 pieces of jewelry and 104 watches. The previous year, the same group robbed the same Harry Winston store while wearing painter's uniforms.

According to the Associated Press, these eight men were found guilty on multiple charges including armed robbery in an organized gang, criminal association, and receiving stolen goods. The gang's alleged mastermind Douadi Yahiaoui received the heaviest sentence of 15 years in prison. The other individuals in his crew, — including his older brother Mohammed and former store security guard Mouloud Djennad — received prison sentences as low as nine months. Djenned was responsible for giving the robbers insider information and letting them in the store. While a few pieces have since been retrieved, most of the stolen Harry Winston jewels are still missing.

Is someone writing the screenplay for this story, yet?

More like this
Most Comfortable Underwear For Big Butts
By Audrey Williams
42 Black Owned Fashion & Beauty Brands To Support Today & Always
By Mekita Rivas, Shea Simmons, Kui Mwai and Dominique Norman
11 Graduation Guest Outfit Ideas To Wear To Someone Else’s Ceremony
By Phoebe Avison and Claire Fox
Why Eurovision 2023's Host City Won’t Be Revealed For A While Yet
By Sam Ramsden and Rachel Mantock
Get Even More From Bustle — Sign Up For The Newsletter