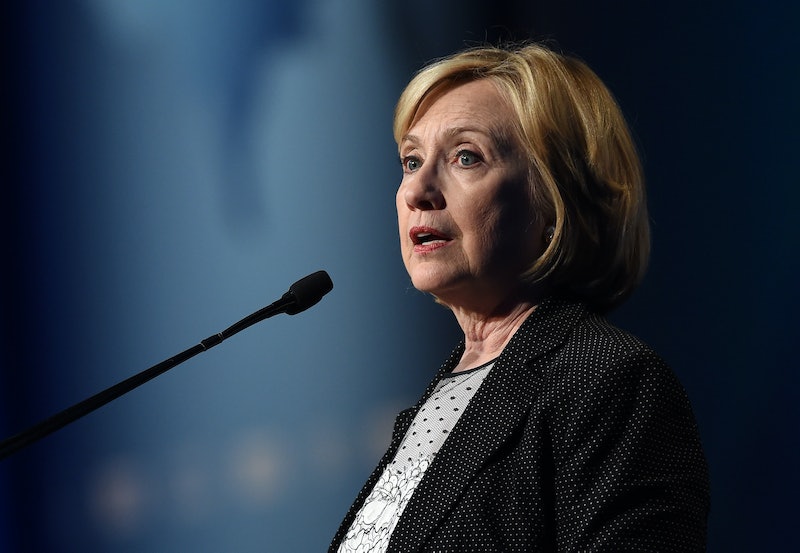 The New York Times reported on Monday that Hillary Clinton used only a personal email account during her time as secretary of state. If you're thinking, "So what?", it might actually be a bigger deal than you think. Federal requirements and National Archives and Records Administration regulations state that correspondence by officials — such as emails — must be kept as part of the State Department's records. So, this breach, as many are calling it, violates law as Clinton was a federal official at the time, and her emails regarding government matters must be made available for people such as journalists, congressional committees, and historians to access.

Two months ago, Clinton's advisers reviewed her personal email account and handed over more than 55,000 pages of emails to the State Department as a response to their record-keeping practice efforts. And though a Clinton spokesman, Nick Merrill, told The New York Times she has been complying with the "letter and spirit of the rules," it might not be enough. Her aides might have reviewed and handed over many of the emails, but the process of how they chose which emails to include is unclear, and it's sparked a lot of criticism that the emails were ever sent solely from a personal email account in the first place.

It's a bit of a blow to the former Secretary of State, who is likely gearing up for a possible 2016 presidential run. Just last week, The Washington Post released a report showing that the Clinton Foundation received millions from foreign governments while Clinton was still serving in a federal capacity. The revelation raised concerns about ethical violations, and this new finding is causing uncertainty about Clinton's transparency, The New York Times writes.

And while the breach of protocol raises questions about the secrecy, that's not to mention the security of it all. Assumably the federal government uses an email system that has some sort of encryption and security measures in place, and if Clinton was using her own email for corresponding with foreign governments, who knows what information is where?

The personal email account was recently discovered during a House committee investigation into the Benghazi attack on the American Consulate in 2012. The Washington Post reports that the domain clintonemail.com was registered the day Clinton's Senate confirmation hearings began in January 2009.

Even though the Times says Clinton never had a government email during her tenure — seriously, no one ever thought to create one for her? — she should have known that those emails were public record, and she should have taken steps at the time to archive her correspondence. The Times reports that Clinton and the committee investigating Benghazi declined to comment on whether those specific emails will be made public, it might be in Clinton's best interests to go ahead and release all the emails during those four years from her personal account. It'll show that she's committed to transparency, and, hopefully, it will prevent her probable 2016 campaign from taking too big a hit.