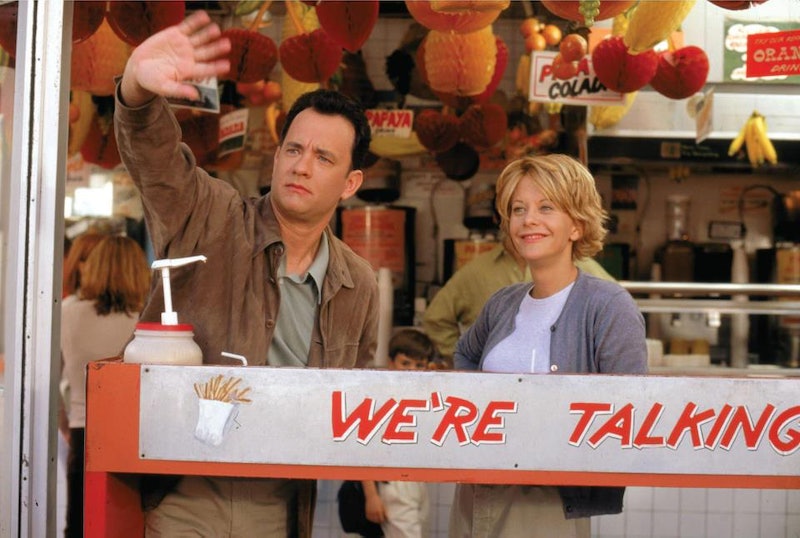 Growing up in the 90s, Tom Hanks and Meg Ryan gave me unrealistic expectations for love. Their romantic comedies were always filled with so much fun, romance, undeniable chemistry, and a happy ending. It's now 25 years since Joe Versus the Volcano, their very first film together, and still Hanks and Ryan remain the romantic standard movie couples are measured against. Although the cult classic film was a box office flop, Hanks and Ryan went on to charm audiences in the classic Nora Ephron romantic comedies Sleepless in Seattle and You've Got Mail.

There's just something so special about Joe Versus the Volcano being their first movie together, though. The film, released in 1990, follows Hanks as Joe, a man who thinks he has a terminal illness and sets off to jump into a volcano. Ryan plays his love interest in three (yes, three) different roles. The late Roger Ebert gave the film a rave review, saying the movie "achieves a kind of magnificent goofiness. Hanks and Ryan are the right actors to inhabit it, because you can never catch them going for a gag that isn't there: They inhabit the logic of this bizarre world and play by its rules."

While Joe Versus the Volcano may have been their first film together, I certainly don't think it was Hanks and Ryan's best joint efffort. Here are their film relationships, ranked in order of chemistry, fun, and — of course — romance.

I mean, of course this 1993 classic would top the list. Sleepless in Seattle deconstructs the romantic movie (namely Cary Grant's An Affair to Remember) and rebuilds it with its own modern twist about finding your soulmate — and believing that perhaps a second soulmate is out there for all of us, too. It's also one of the first movies I remember seeing in the theater and it's one of the first movie soundtracks I became obsessed with, putting Louie Armstrong's "A Kiss to Build a Dream On" on repeat.

In a way, it is odd that this movie tops the list, because Hanks and Ryan merely share the screen for two scenes, but still there was a total sense of them falling in love as Baltimore Sun reporter Annie Reed and Seattle widower Sam Baldwin.

This 1998 romantic comedy is Ephron's remake of the 1940 classic film The Shop Around the Corner. On the surface, You've Got Mail is completely dated by now — Hanks plays a bookstore conglomerate owner who wants to buy up the space inhabited by Ryan's small children's bookstore (when bookstores were a thing) and they exchange flirty e-mails over AOL, real names hidden by their screen names (when AOL and screennames were a thing). Even the title is inspired by the old "You've got mail" sound AOL used to make.

But what still remains is the charm of the two leads, who actually interact a lot in this film, as opposed to not much in Sleepless in Seattle, and it gives us a great sense of that beautiful Ryan and Hanks chemistry, not to mention some classic lines. Plus, this is probably the first pop culture instance of online dating in film (If only it were this cute and charming in real life).

Joe Versus the Volcano

Ryan literally plays Hanks' vision of love as she inhabits three different characters: Joe's coworker DeDe, socialite Angelica who calls herself "a flibbertigibbet," and raft-mate Patricia. While this is Ryan and Hanks' first film together, I don't think it's their absolutely best, but their chemistry is undeniable in this movie about living life to its fullest.