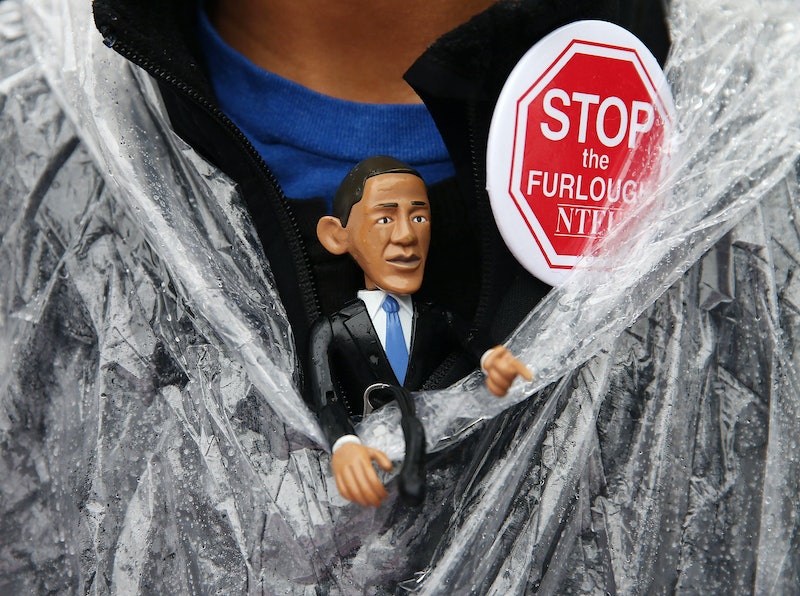 Meetings between Democratic and Republican leaders at the White House late this week have sparked some optimism: a GOP offer to extend the debt-ceiling deadline, but not end the government shutdown, is reportedly on the table. As the shutdown pushes through its 11th day, GOP senators took a trip to the White House for a little talk about a future budget plan, as the nation hurtles closer towards defaulting on America's debt, which will kick in less than a week from now. Friday's talks came mere hours after meetings between President Obama and House Republicans Thursday evening, which ended with little accomplishment. If legislation to end the shutdown goes through, Obama has tentatively agreed to then begin negotiations about other topics (cough, Obamacare, cough.)

As the House took baby steps towards a compromise Friday, passing a temporarily bill that orders the restart of nuclear research and security programs during the shutdown, Senate Republican Leader Mitch McConnell (R-Kent.) was calling for a more final resolution. With only five days left until the U.S. hits the debt ceiling and risks default, McConnell called on Congress to, "put this hysterical talk of default behind us and instead start talking about finding solutions to the problems."

House Republicans have discussed a six week extension to the debt ceiling, but their Senate counterparts have intimated that their extension as too short, and are discussing a possible compromise that would fund the government for at least six months whilst simultaneously repealing some portions of Obamacare, like the medical device tax. When it comes to a long extension, both Republicans and Democrats are united: Democratic leaders are also pushing for a longer extension on the debt limit. House Minority Leader Nancy Pelosi (D-Cali.) insisted that six weeks was simply not enough to help: "I think we should go at least one year, so that there's some certainty in the markets, and that every six weeks people don't have to wonder if the United States of America is going to stand by its full faith and credit.”

Yup. That does sound stressful.

Despite the lack of an agreement, the talks have had some GOP leaders singing a different, more optimistic tune about their Affordable Care Act demands being. Of the House plan, House Budget Committee Chairman Paul Ryan (R-Wisc.) said, "The president didn't say yes, he didn't say no."