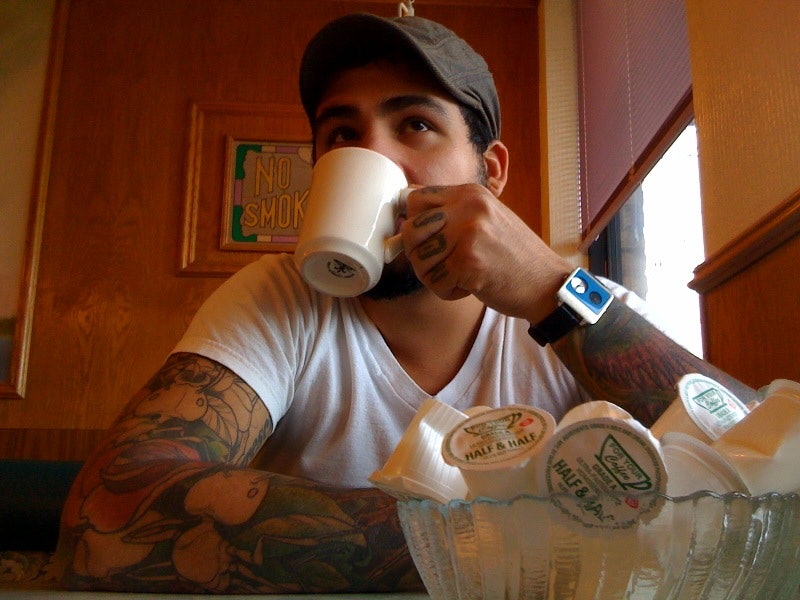 When @HotDudesReading landed on our online radar last month, the Internet didn't know what hit it — all it knew is that it was absurdly attractive and had excellent taste in reading material. But in case bookish folks don't do it for you, here's something new to drool over: The @MenAndCoffee Instagram account, which features — you guessed it — hot guys drinking delicious cups of coffee. There's nothing quite like a brightly colored mug to add a little punch to your ensemble, am I right?

@MenAndCoffee is the brainchild of Canadian social media strategist Alex Tooby, who began the account largely on a whim. “The idea for Men and Coffee came up randomly in conversation with a friend of mine,” she told the Daily Mail. She continued, “We were just having a girls night, discussing how pleasant the two things were together. Since I work in social media the first thing I did was head to the Internet to see if anyone had a similar brand. To my surprise, no one was doing this, so I jumped on it that night and made the Instagram account Men and Coffee.” Tooby initially built the account by “scouring the Internet for the perfect photos”; as its popularity began to rise, though, people started submitting their own photos using the hashtag #menandcoffee.

It's probably worth noting that there isn't a whole lot of diversity in the images; they men are all conventionally attractive, and they mostly have a hipster sort of vibe. Since the account began featuring user-submitted photos, though, the demographic has expanded: According to Tooby, “90 percent of [her] feed content” comes directly from users — which means that @MenAndCoffee is now full of pretty people from all over the world. If, in addition to going global, the account also starts branching out beyond the realm of the conventionally attractive, I think there's a lot of potential for awesomeness there.

Oh, and hey, we're equal opportunity in terms of gender when it comes to gorgeous people and caffeinated beverages, too: If dudes don't do it for you, there's also a @WomenAndCoffee Instagram. Again, there's not a boatload of diversity there yet; it's still young, though — it just started up at the beginning of February, whereas @MenAndCoffee has been around since November of 2014 — so, as is the case with its sibling account, there's plenty of room to grow.

To check out more, head on over to @MenAndCoffee and @WomenAndCoffee — and don't forget to stop by the Men And Coffee official website to deck yourself out in coffee gear while you're at it.