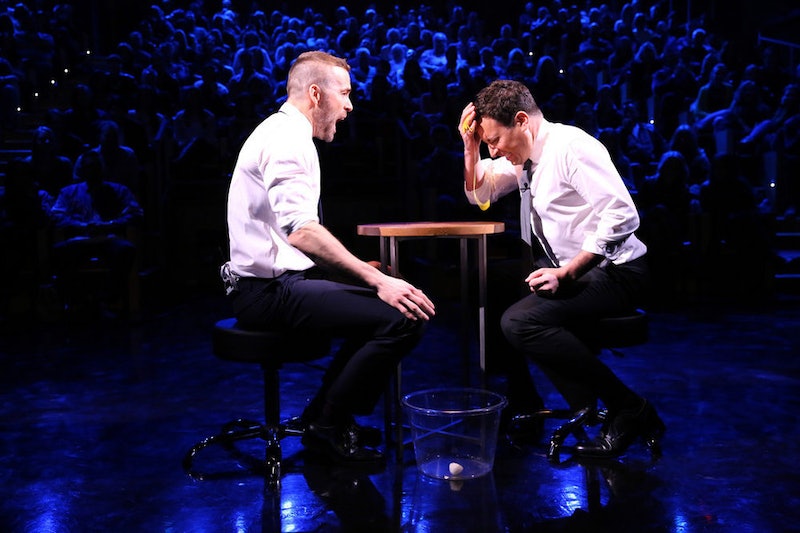 What happens when you put two goofballs together with a dozen eggs? They smash them on their heads. That's exactly what happened when Ryan Reynolds and Jimmy Fallon played Egg Russian Roulette on The Tonight Show , each taking turns seeing if they pulled a raw egg or a hard-boiled one — there were only four raw ones in the whole dozen, so their chances weren't bad — and cracking everyone up while they cracked egg shells. I was in the audience for the episode taping, and the tension in the air when they pull their choice out of the carton was so intense that you could see people clenching their fists, terrified of what would happen. (OK, maybe that was just me holding my breath.) Also, Reynolds' biceps were trying to fight their way out of his white shirt, so watch for that.

Reynolds has a history of losing at all of Fallon's games, including a sexy Water War, but he was pretty confident during the egg battle. During a few smashes, he doesn't even skip a beat before slamming it onto his head, knowing it has to be hard-boiled. Oh, and if you like puns, there's plenty of eggcelent yolks to go around — mostly from announcer Higgins, who puts on the best accent for this segment. Check out the hilarious game below, and don't be alarmed if you still find Reynolds sexy when he's covered in eggs. It's totally normal.

More like this
'Better Call Saul’s Co-Creator Explained Jimmy & Kim’s “Happy Ending” In The Finale
By Brad Witter
What's New On Netflix: A Third '365 Days' Movie & Lili Reinhart’s New Film
By Arya Roshanian
What’s New On Netflix: 'Never Have I Ever' & 'Indian Matchmaking' Return
By Arya Roshanian
Everything To Know About The HBO Max & Discovery+ Streaming Service Merger
By Brad Witter
Get Even More From Bustle — Sign Up For The Newsletter