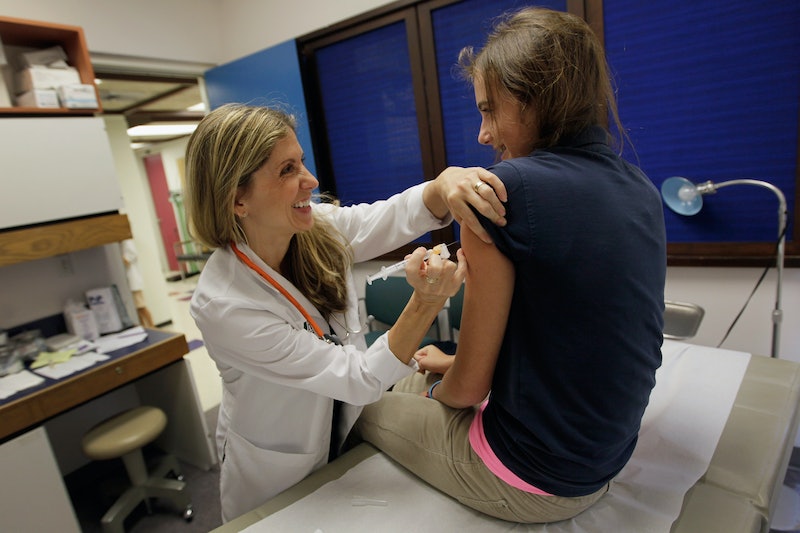 We'd say we're shocked, but we're not. It turns out the HPV vaccine has been busy doing exactly what it was designed to do: preventing a virus.

According to a study released Wednesday in the pleasant-sounding Journal Of Infectious Diseases, the rate of HPV infection in teenage girls has dropped from 7.2 percent to 3.6 percent since the vaccine's introduction in 2006. There's just one catch: only a third of teenage girls are actually getting the vaccine. But first, let's get a few things straight:

What is HPV again? The virus is the principal cause of cervical cancer. It's a sexually transmitted infection, and according to the Center for Disease Control, most people will get it at some point in their lives. HPV is symptomless, and often goes away by itself. But if it doesn't, it can cause cancer—in particular, cervical cancer, which also happens to be the most common cancer in women. You can see how you'd want to get this vaccine in at a young age.

Then why aren't more teens getting vaccinated? Well, some people are of the (somewhat outdated) view that young girls aren't having sex, and therefore don't need it. Which is just wrong.

First off, the vaccine is preventative, and most effective when administered before women potentially expose themselves to the virus. But of course, we know this vaccine is also crucial because some teens do have sex. According to the CDC, by the age of 12, only two percent of kids have had sex. (Um.) After that, though, the numbers climb. (Pun intended.) One-third of teenagers have had sex by 15, nearly half by 17, and two-thirds of 18-year-olds have been there, done that.

It's also possible that some parents aren't getting their teens vaccinated because their insurance isn't covering the cost. According to The CDC, while "most health insurance plans cover recommended vaccines...some insurance plans may not cover any or all vaccines."

What are other countries doing? In Europe and other countries, the HPV-vaccination rate hovers at about eight in ten. (Even in Rwanda, it's eight in ten. Come on, America.) It's estimated that 50,000 American teenagers who didn't get the vaccine when they could have will eventually die from cervical cancer.

So why has the vaccine been so successful if it's only been given to a third of teenage girls? First, it's good. Second, it's also possible that those who are vaccinated are minimizing the virus in society in general—a practice known as "herd immunity." Finally, half of teenage girls have gotten one dose or more, but not gone through with the full three—and the vaccine might be so good, in fact, that it's been somewhat effective even with less than the recommended amount.