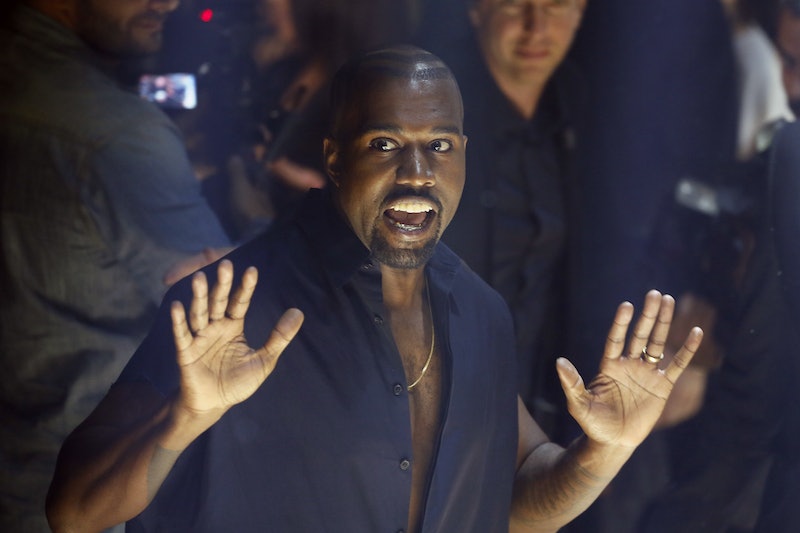 Put down your coffee. Put down your phone. Put down your work. If there's one thing you should be doing at this very moment it is reading Kanye West's Oxford University lecture. Yes, for real. West gave quite the lecture on Tuesday at Oxford University's Museum of Natural History, and it will make your day so much better. His speech is bizarre, entertaining, sporadic, and even revealed some interesting facts about the rapper. For example, did you know Kanye West talks to President Obama on the phone? Well, at least, that's what West said. He revealed,

Excuse me while I go grab a tissue, because I'm crying I'm laughing so hard. Does he really talk to the POTUS on the phone? Does President Obama really call West? Who still has a home phone? If they do chat, what do they talk about? Anyone else have so many questions about this? Seriously, I need answers, now. Until I get them, I'll try to satisfy my West/Obama interest by coming up with some topics these two might chat about if they do indeed talk on the phone.

We all know President Obama can sing Al Green's "Let's Stay Together," so West might ask him to collaborate on one of his songs.

Remember that time President Obama called West a "jackass" — twice? Even though the President thinks West is a "jackass," he also finds the rapper "talented." I guess they have a love/hate relationship and probably try to work it out over the phone.

Not only did West once diss President Obama for his politics, but he also said he could care less what the President thinks of him and his wife, Kim Kardashian. Maybe they use their phone calls as a type of therapy session to work past all this awkwardness?

Tips On How Kanye Can Be More Gracious

I have a feeling President Obama offers West all kind of advice on how to be more gracious about everything in life, in addition to how to drop that ego of his. It must be working, because during his Oxford speech, West said, "One of my biggest achilles heels has been my ego. And if I, Kanye West, can remove my ego, I think there’s hope for everyone."

How Kanye Is The Next Steve Jobs

You know West talks about himself a lot while chatting with the POTUS, right? He probably even goes on and on about how he is the next Steve Jobs. I mean, just take a look at this quote: "I think what Kanye West is going to mean is something similar to what Steve Jobs means. I am undoubtedly, you know, Steve of Internet, downtown, fashion, culture."

How They Can Change The World

If Malia and Sasha Can Babysit North

You know West would ask if Sasha and Malia could babysit North. Just imagine all the pictures Kim Kardashian would share with the world of this event on social media.

Why Kanye Will Never Interrupt The President

"Imma let you finish" is something West would never say to the President — even on the phone.

How The President & Kim Have Something In Common

Yep, they both love to take selfies. The real question is: whose are better?

More like this
Kim Kardashian Father’s Day Tribute To Kanye West Called Him “The Best Dad”
By Stephanie Topacio Long
Viola Davis Opened Up About How Hard It Is To Portray Michelle Obama
By Grace Wehniainen
Here’s How Lizzo Is Supporting Abortion Rights After The Roe v. Wade Reversal
By Brad Witter
Michelle Obama & Taylor Swift React To The Supreme Court Overturning Roe v. Wade
By K.W. Colyard
Get Even More From Bustle — Sign Up For The Newsletter