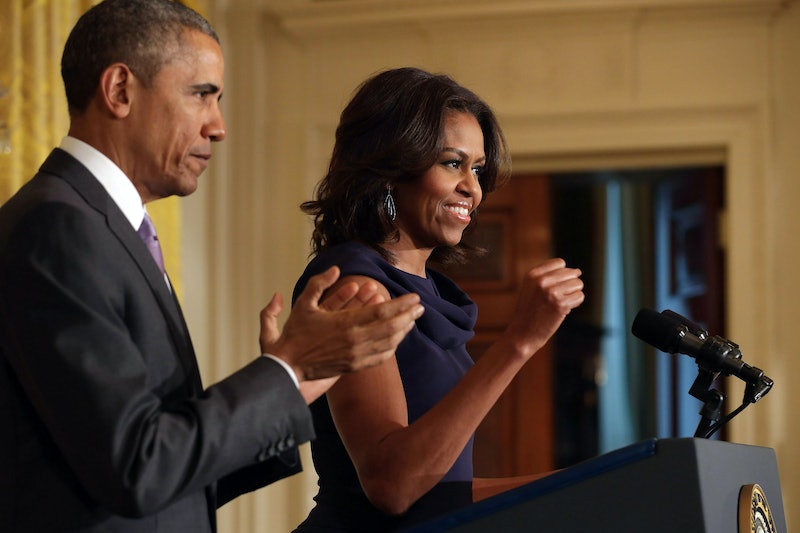 On Tuesday, the White House launched the "Let Girls Learn" initiative that would increase efforts to help young girls across the world attend and complete school. In what White House Senior Adviser Valerie Jarrett called a great way to welcome International Women's Day on March 8, President Barack Obama and First Lady Michelle Obama took to the podium to announce the program together at a press conference on Tuesday.

Speaking first, the president said that while girls' education was close to his heart, being a father to two girls, Sasha and Malia, it was also a foreign policy issue.

First Lady Michelle then took her turn at the microphone to detail the program — 7,000 Peace Corps volunteers in over 60 countries will work with local community leaders to identify the obstacles in attending and finishing school that girls in these countries face. She also announced that her trip to Cambodia and Japan in March will be aimed at promoting the program.

A White House statement released before the speech said:

62 million girls around the world — half of whom are adolescent — are not in school. These girls have diminished economic opportunities and are more vulnerable to HIV/AIDS, early and forced marriage, and other forms of violence.

Yet when a girl receives a quality education, she is more likely to earn a decent living, raise a healthy, educated family, and improve the quality of life for herself, her family, and her community.

Jarrett reiterated on MSNBC Tuesday morning ahead of the launch that girls who finish school have a higher chance of earning a decent wage and improve the lives of their families. Jarrett added:

Girls' education in developing countries has been a prevalent issue in recent years, gaining a surge of attention on the world stage when a Pakistani teenager, Malala Yousafzai, made headlines for standing up to the Taliban to champion girls' right to education. The First Lady had also pointed to Yousafzai — the youngest Nobel Peace Prize laureate — in her speech as an example of young girls themselves advocating for their own education.