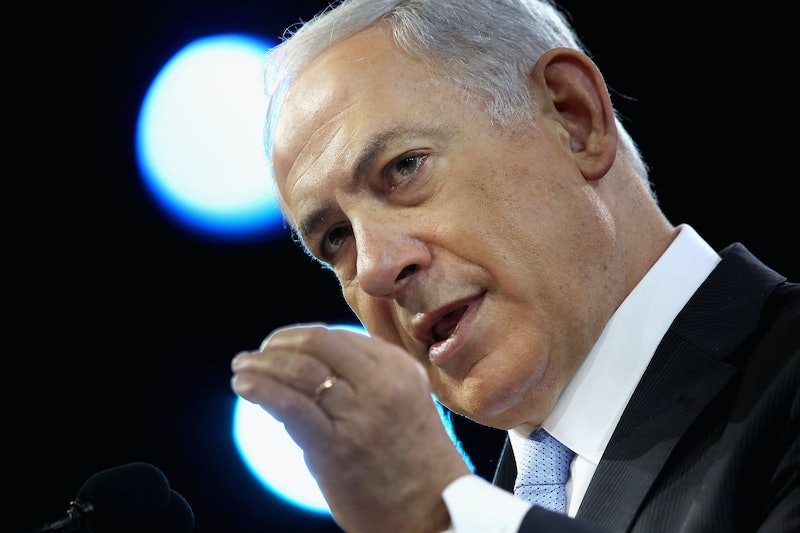 It may have been one of the most controversial speeches in recent history — one that many are labeling a political stunt and a campaign stop — but it conveyed a strong message nonetheless. Israeli Prime Minister Benjamin Netanyahu spoke before a joint session of Congress on Tuesday with one major point: The in-process nuclear agreement between the U.S. and Iran is "a bad deal." And to support his argument, Netanyahu made some fierce statements in his speech that included a brilliant Game of Thrones reference, a Robert Frost quote, and countless different ways of demonizing Iran in between.

Despite the overwhelming opposition to his speech, the audience certainly seemed to be picking up what Netanyahu was putting down because they applauded a whopping 43 times in just under an hour. Perhaps the quote that resonated the loudest came when the Israeli PM commented on the Obama administration's ongoing nuclear deal with Iran, which will be decided on March 31, and said, "This is a bad deal — a very bad deal. We're better off without it."

Immediately, Congress erupted in applause. But that was just one quote out of many that incited praise. Here are Netanyahu's best soundbites from the speech that drew the most cheers.

Right after dropping the GoT reference, which the Internet is still losing its mind over, Netanyahu drew some of the loudest applause of the night when he said:

When it comes to Iran and ISIS, the enemy of your enemy ... is your enemy.

And when he made this analogy:

Now, if Iran threatens to walk away from the table — and this often happens in a Persian bazaar — call their bluff. They'll be back, because they need the deal a lot more than you do.

And when he proposed a "better deal" that would better prevent mass destruction:

When he quoted Robert Frost:

You don't have to read Robert Frost to know. You have to live life to know that the difficult path is usually the one less traveled, but it will make all the difference for the future of my country, the security of the Middle East and the peace of the world, the peace, we all desire.

When he paid tribute to Holocaust survivor and Nobel Prize-winning author Elie Wiesel:

Elie, your life and work inspires to give meaning to the words, "never again."

And when he closed out his speech by reemphasizing the strength of Israel's relationship with the U.S.: