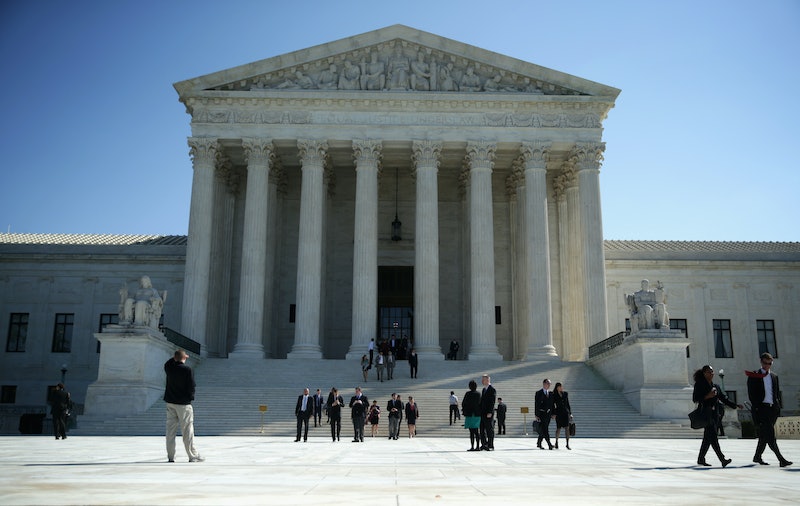 Obamacare has not had an easy life, and things might be about to get even worse for the fairly young law. The Supreme Court will hear the King v. Burwell case Wednesday, and it could unravel the Affordable Care Act (ACA) and leave 9.6 million people without health insurance. For the millions of women who signed up for insurance under the ACA, this could mean losing coverage for birth control, well-woman exams, and cancer screenings.

In King v. Burwell, the Supreme Court will decide whether or not it's legal to give tax subsidies to middle- and low-income Americans who purchased health insurance through an online "exchange" created by the federal government. The plaintiffs argue that the law says it's only legal in states that have created their own exchanges, which is only 13 states and the District of Columbia. If the Court sides with the plaintiffs, people who signed up for Obamacare in the other 37 states will lose their health insurance.

Obamacare made big strides for women's reproductive health, but that will all be lost for the women in the states that don't have their own exchanges. These millions of women will lose no-copay birth control, no-copay well-woman exams, and no-copay cancer screenings. These benefits are especially crucial for low-income women who rely on the coverage to receive necessary health care.

Maternity care, another huge aspect of Obamacare, would also disappear for millions of women. All health plans offered under ACA must include maternity and newborn care, mental health treatment, and pediatric care. According to the National Women's Law Center, only 12 percent of private insurance plans covered maternity care prior to ACA. In a report about King v. Burwell, the National Women's Law Center says:

By attacking the financial help in the form of tax credits that is already available to millions of women, King could destabilize the entire health care law. Without financial help to purchase health insurance, King threatens to disrupt the functioning of the insurance market in these 37 states, which would be disastrous for millions of women and their families now and in the future.

Even though Republicans have been trying to destroy Obamacare since its inception, it could create problems for 2016 Republican presidential candidates, putting them between voters on either side of the issue. If the Court sides with the plaintiff, the millions of Americans suddenly without health insurance will not be pleased. The repercussions of this case might prove detrimental for women's reproductive health and American's healthcare in general.