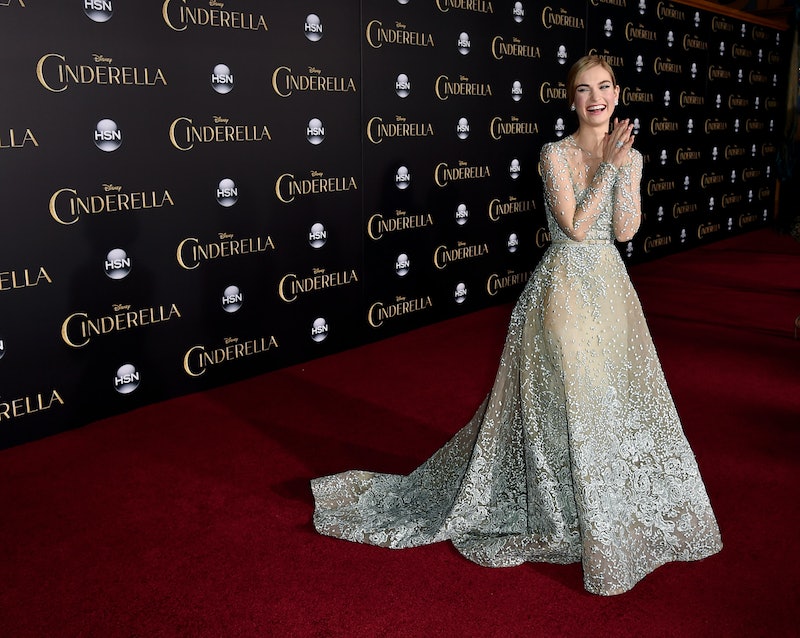 Original Disney princesses may not fit (er, fill) today's beauty standards: tiny feet, small waists, and flowing hair have always been Disney's MO, and unfortunately the newest lineup of princess-inspired films have followed suit. Despite a couple breaks in the trends (think: curly hair in Brave) it looks like Disney is back to its old ways in Cinderella. And its leading lady has absolutely no problem with it. That's right, Lily James doesn't think anything is wrong with Cinderella's teeny waist.

When we all finally got a glimpse of the Cinderella trailer with the lovely Lily James, the Internetz was not pleased. In the movie trailer, James wore the iconic baby blue ball gown, which featured an insanely small waist. It had everyone wondering did Disney really Photoshop that?

According to James, the teeny-tiny waist is not the work of post-production computer magic, but instead a corset designed by costume designer Sandy Powell. James was less-than-happy with the harsh response to her big screen look and said so at the Hollywood Boulevard premier on Sunday. According to the LA Times, the 25-year-old actress defended the look by saying "I naturally have a really small waist."

And to the haters? James said, "I think it’s all very hypocritical, and they contradict themselves, and they’re drawing more attention to it. I think all that stuff’s so negative, and you’ve got to let it wash over your head. She also added “I’m so healthy. I’ve got hips and boobs and a bum and a small waist."

I can see where James is coming from — after all, our society is much more inclusive to a variety of healthy body shapes in film. Some people's healthy looks are different than others, and today's standard of beauty lies in diversity. I have no problem with a naturally thin Cinderella. However, I do have a problem giving a real-life Disney princess a corset.

Making the transition from animation to IRL princesses is tricky enough for producers and writers without the added corset. Disney viewers today respond to a new-age princess with different ideas about her own life and beauty. Disney dropped the "I-need-a-man" storyline in Frozen and watched the money pile up. Frozen is the highest-grossing animated film of all time, according to Variety. So why would Disney choose to take a step back by dressing James in this unreal corset? It's completely unnecessary in order to connect with their audience. What were they thinking? More importantly, what is wrong with James' already naturally thin shape?!

A man-needing, floor-cleaning, corseted Cinderella worked for me when I was watching the VHS tape at four years old. At 24? I have a different world view, set of expectations, and ideas about what it is to be a woman — none of which involve a corset.