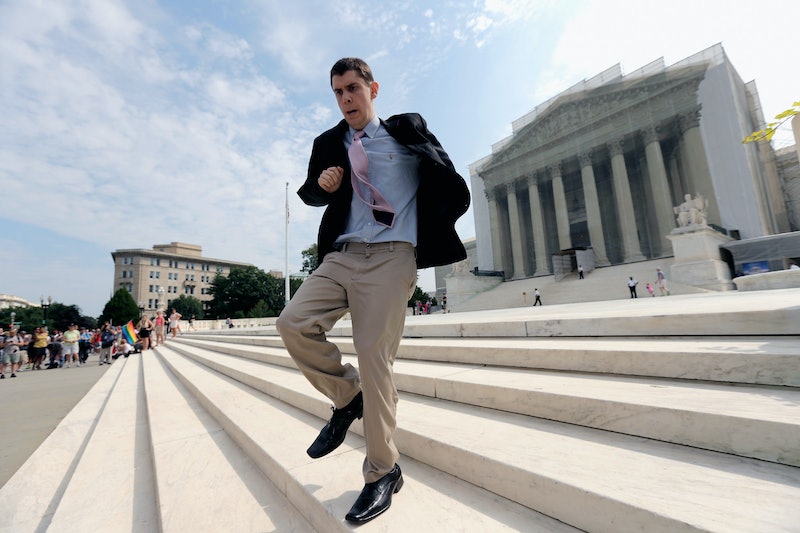 On Wednesday, the Supreme Court will begin hearing King v. Burwell, a fight over whether the federal government can subsidize heath plans in over 30 states that didn't adopt their own health care exchanges following the rollout of the Affordable Care Act (ACA). Once the oral arguments are over, the plaintiffs, defendants, and the whole of the United States will begin the wait for the court to determine the constitutionality of the program element. So, what do we know about the time frame for a King v. Burwell ruling?

Well, the Supreme Court is able to rule at any time, though this seems unlikely. Historical precedent indicates that major cases tend to be released at the end of the judicial term. Just look at all of the cases pertaining to Obamacare, when the ACA was held as a tax by the court in 2012 — that was released in June. And then, last summer, we saw the Hobby Lobby decision released in, you guessed it, June. So basically, we will know before the summer recess either in late June or early July (the exact date of recess has yet to be posted on the SCOTUSblog calendar).

What we could end up seeing is a decision in June for both for the ACA and same-sex marriage. That could be a truly historic month.

A SCOTUS ruling timetable is important to think about, because if the court rules against the ACA, the federal government would have to stop subsidizing state exchanges within 25 days. It could even stop the day after the ruling. Congress will then have to develop at least a temporary policy solution to curtail rising out-of-pocket insurance costs to current beneficiaries of the subsidies. A group of House lawmakers have a tentative post-ACA plan known as the "Offramp from Obamacare," which would temporarily cover the cost of the subsidies until a long term solution, likely involving tax credits, is put in place.

Lawmakers will be considering new solutions as SCOTUS ponders a decision about this case. Time is of the essence for both a ruling and potential solution should the court rule against the White House. The court might choose to wait to release its decision to allow Congress more time to consider viable alternatives. So as we await a decision, we will also likely await to see cooperation among legislators to pound out a solution. Time, like money, is usually spent quickly by Washington.