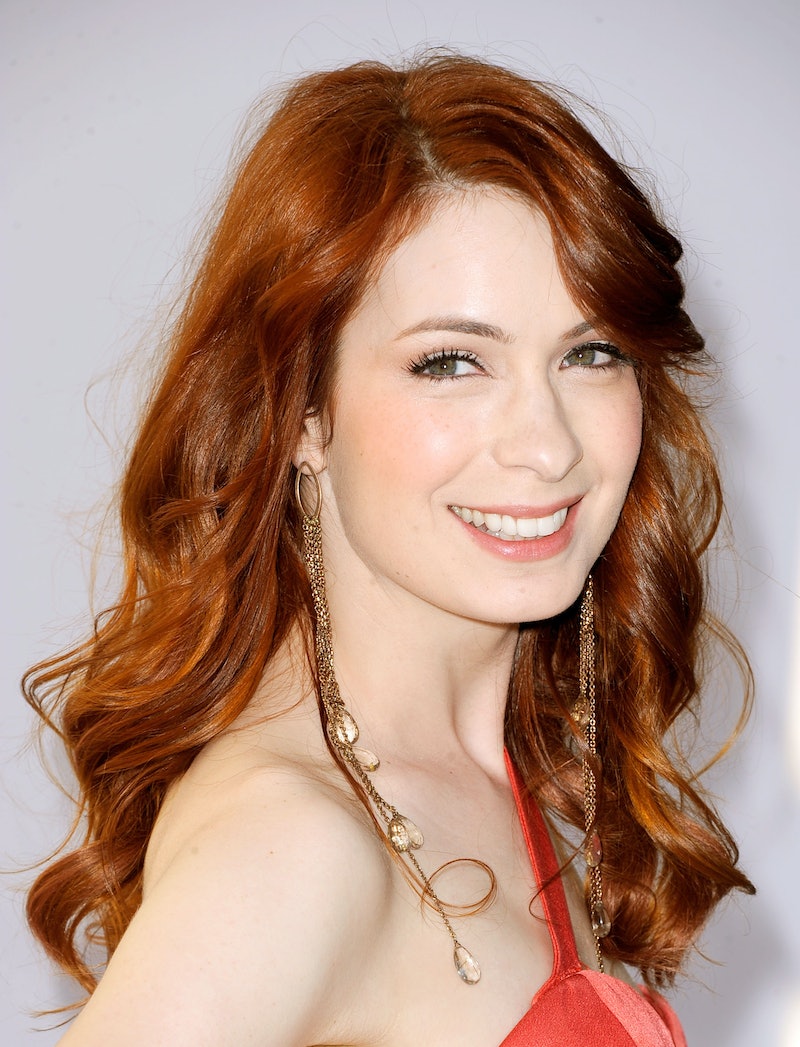 Felicia Day, for those who are unaware of Dr. Horrible's Sing-Along Blog, the TV shows Eureka or Supernatural, the web series The Guild, or a little web channel called Geek and Sundry (it's okay if you haven't, just don't disappoint me again), Day is the wonderful geek maven behind a series of beloved characters and few fantastic series of her own. And she just might be the most adorable person this side of the geek divide. She's basically the Amy Poehler of Geek Culture.

Proof came in the form of an hour long discussion with the actress and writer Friday at New York Comic Con where she spoke about Geek and Sundry, and the many other sundry moments of her busy, busy career. It was nothing short of a ray of sunshine in the basement of New York's Javitz Center, where no sun can reach and cell phone service goes to die.

Here are 10 reasons you're about to fall in love with Ms. Felicia Day:

SHE'S NOT PERFECT, WHICH MAKES HER PERFECT

Day is known for her intense love of video games, which led to a Geek and Sundry series in which she and her brother play classic video games together. Apparently, Day never played Pokemon games and her fans were none too please with the gaming goddess. But to that, she offered no apologies, instead teasing them back: "Don't take my geek card away because I don't know what a Charmander is."

Amen, sister. I'm not sure what it is either, but suddenly I find myself craving a flame-broiled cheeseburger.

Seriously, this advice will put whatever your best friend told you to shame (sorry, readers' best friends). It's simple, but she knows from experience that comparing ourselves to others who've had success in fields we'd like to succeed in can only lead to disappointment. "Only you can be you," she said. Do you hear that, folks? Don't keep comparing everything you do to your idols — you're not the same person and you might not experience success the same way.

There's just one problem with this great advice: now I'm starting to wonder if I'll ever be as wonderful as Felicia Day. Dammit.

SHE'S RESPONSIBLE FOR THIS VIDEO HAVING A HOME ON THE INTERNET:

SHE DOESN'T BELIEVE IN V.I.P. STATUS

At the last big Comic Con event in 2013, San Diego Comic-Con hosted a week-long party for her fans — no list spot required. She told the fans at NYCC that she wanted to correct the imbalance of SDCC being "super closed off from normal people." For her, it's all about the fans.

The actress and entrepreneur recently cut off her iconic red locks to make way for a choppy new short hairdo (below), which garnered her many over-the-top compliments during her appearance at NYCC. Her response? Adorable, hilarious deflection from praise. "Yeah, I went to a bar last night and people were hitting on me. So I left."

The best way to take a compliment? With a dose of humor. Well done, lady.

SHE OWNS HER QUESTIONABLE DECISIONS

Day was in Bring it On Again, a terrible straight-to-DVD sequel to the 2000 classic cheerleader comedy Bring It On. Yeah, she knows that movie was awful, but her response to one fan who questioned her decision made it all worthwhile. "Why would I not do that?"

She's right. Who wouldn't want to goof around in a terribly awesome straight-to-DVD remake? All fun, zero pressure.

SHE WANTS TO GIVE US THE POWER OF NATHAN FILLION'S HUGS

Let's just go with the quote on this one:

"If there was a neural network and I could share with you all any sensation, it would be the sensation of Nathan Fillion's hugs."

Well, you heard her, Science. Get to it already.

LASTLY, SHE WANTS YOU TO CREATE NEW, WONDERFUL, GEEKY THINGS WITH HER

You have her full support. While she lamented not being able to bring every Vlogger and online personality onto her Geek and Sundry channel, she left her fans with one very important piece of advice: "You don't need anyone's permission to make something."

You know, if this Math-major-turned-actress-and-queen-of-geeks teamed up with Tina Fey, Amy Poehler, and Mindy Kaling, they wouldn't just have a shot at taking over the world; we'd hand the whole damn thing right on over to them.