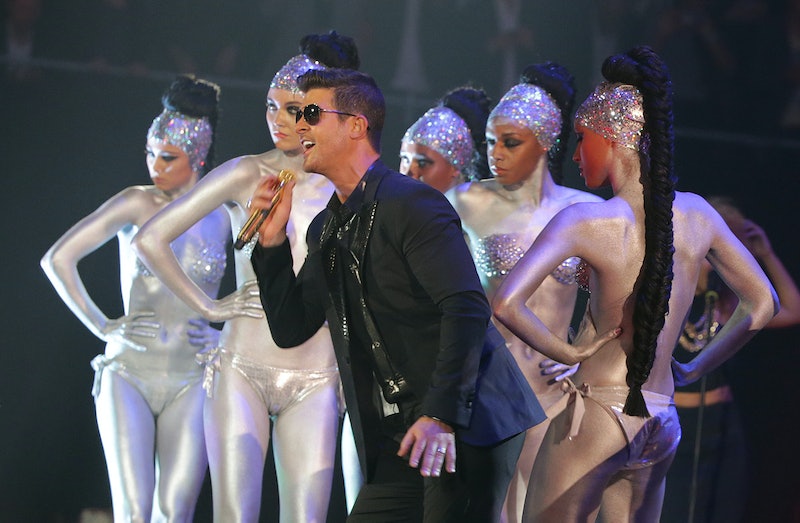 So we now know exactly how much money the controversial song "Blurred Lines" made. Hopefully you're already sitting down for this, because Robin Thicke's 2013 hit, which has been accused of promoting harmful ideas about sex and consent, raked in quite a bit of cash. How much? "Blurred Lines" made Robin Thicke $16,675,690 in profits, according to Time.

While the song guaranteed Thicke some financial success, radio-play, and paparazzi attention when it first came out, this news has made it clearer than ever that money cannot buy one happiness, or even long-term success. Why? The whole reason we even know how much money the song made is because Thicke is being sued by Marvin Gaye's family for allegedly infringing on the copyright of Gaye's "Got to Give It Up."

According to The Hollywood Reporter, the financial profitability of successful songs is normally kept a tight-lipped secret in show business. But in this case, the numbers have come to light since Gaye's family is asserting entitlement to a large amount of the money made by the song. After all, this is a copyright case. And it is just the latest news in Thicke's very public downfall — both emotional and financial — that has taken a hold of him following the song's release.

Perhaps the most striking example of Thicke's downward spiral is the end of his relationship with Paula Patton, who filed for divorce last October after being married to him for almost 10 years. Patton said they had been separated since last February. Despite Thicke's very public and dramatic attempts to win his wife back after their separation, including naming an entire album after her, Paula, and dedicating the songs to getting back together with her, he was unsuccessful with his reconciliation.

Following the pattern of his failed love life, the album itself was also a complete flop, especially in comparison to his success with "Blurred Lines" from his earlier album of the same name. And now, he's being sued for the very song that thrust him into the mainstream limelight back in 2013.

It's almost like any success he had in the past is now being taken away from him. Because he did have success; the numbers don't lie. And now, he might not have those numbers anymore to back up what he once was, considering how the case may play out in court. It may sound cliché to say that money can't make you happy, or even successful in the long-term, but in Thicke's case, it's undeniable that the time-old saying is true.

More like this
Adele’s All-Female Lineup Includes Kacey Musgraves, Mahalia, & Self Esteem
By Shahed Ezaydi
Taylor Swift's “Carolina” Theme For 'Where The Crawdads Sing' Soundtrack Is Here
By Jake Viswanath
What Is Elvis Presley’s Net Worth? How The King Earned & Spent His Fortune
By Grace Wehniainen
Big Freedia Reveals The Real Meaning Of Beyoncé’s “Break My Soul”
By Radhika Menon
Get Even More From Bustle — Sign Up For The Newsletter