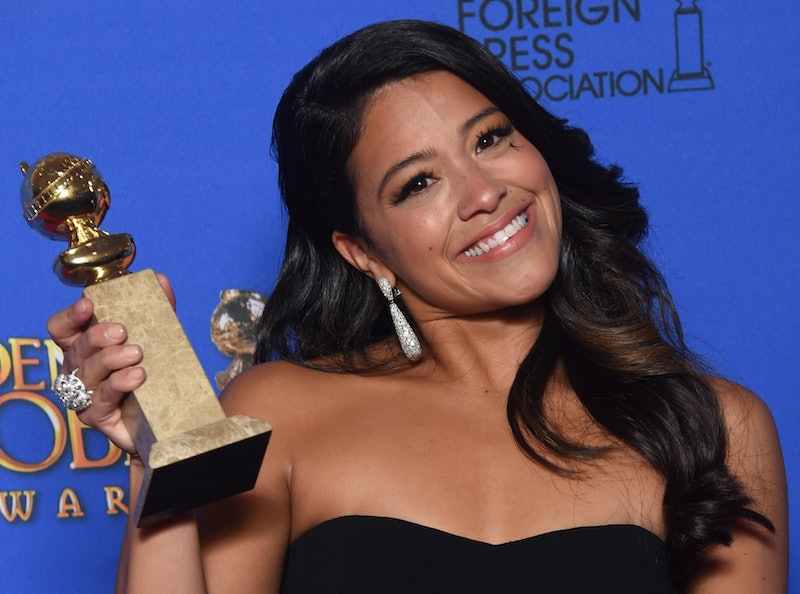 Ah, the sweet convergence of the new and the old, the underrated and the mega-blockbuster trend: Golden Globe winner and generally awesome lady Gina Rodriguez wants to play a superhero according to her Twitter, and is it any surprise that I am so on board for this? We need more Gina Rodriguez all over the place, all the time. Her desire also brings up something else we need a lot more of: Latina superheroes. Onscreen. Preferably on the big screen.

There is, as anyone who hasn't been living under a pop culture-free rock can see, a lot of discussion these days about diversity and representation in our media and culture. But diversity, contrary to what some examples have exhibited in their attempts to "fix" their representation problems (see: SNL) does not just mean throwing a black person and/or a woman into a space and calling it a day. It's a step, surely, and a necessary one, but diversity and representation are ongoing processes. They're ones that require more opportunity for the stories of people of all different backgrounds, ethnicities, genders, sexualities, abilities, etc. to be told and given space. And one thing we very much need is more representation for Latinas. Jane the Virgin is great — I will go to bat for that show over and over again — but Jane the Virgin is not enough. We need more comprehensive representation.

Just take the melancholy tone of America Ferrera talking about Rodriguez' Golden Globe win. She's happy for her, of course, but the fact that Ferrera and Rodriguez are the only two Latina women to win the Best Actress In A Comedy Or Musical Golden Globe ever is pretty telling — and not just of the dearth of great Latina roles on television, but in Hollywood in general. As Ferrera told The Huffington Post recently:

I’ve known Gina for years now, and she is an incredibly warm, genuine and gifted person. I’m very, very happy for her. [But] it’s a little disheartening to know that there are only two of us. [...] The problem isn’t in the awards. It’s not a Golden Globes problem, it’s not an award ceremony problem. It’s a creation of content issue. We need more in art and entertainment that is reflective of the world that we live in. And there’s just not enough reflection in it for women, for people of color. There’s still a huge amount of stories that have yet to be told, and we need those voices to find those platforms so that they can share those experiences. As an audience member, I take it very personally, I take it extremely personally when I watch. I’m a huge lover of television and of film — I have been my whole life — and when there’s too much of the same thing and not enough to reflect the world that I live in, I take it personally.

So when Rodriguez tweets and retweetss things like this...

It's both an actress daydreaming about a role she'd love (and, frankly, that she'd slay at. If you're reading this, DC and/or Marvel, give her a call), and another indication of how we need more. Superheroes and the tropes that come with them are not a direct adaptation of the world we live in — they're fantastical and fun and dark and full of magic and science fiction — but they are a sort of reflection of the stories that we value and the heroes we hold up. They reflect our world just as much as realistic fiction, that reflection is just masked by a lot more explosions. And so it's natural to crave a space in the proceedings, to want to see yourself or members of your community portrayed as hero. It's not like there's a complete lack of hispanic superheroes out there.

It's something Rodriguez brought up during her Golden Globes speech, and it rings just as true for superhero fare as it does to Jane the Virgin.

Lack of representation is and never has been a matter of merit — there is nothing suggesting that Gina Rodriguez couldn't kick just as much ass in a major franchise role as, say, Scarlett Johnasson, or Emily Blunt, or Jennifer Lawrence. In fact, I'm right there with Rodriguez: I really, really want to see her given the chance.

C'mon, Hollywood. I know you can do this.