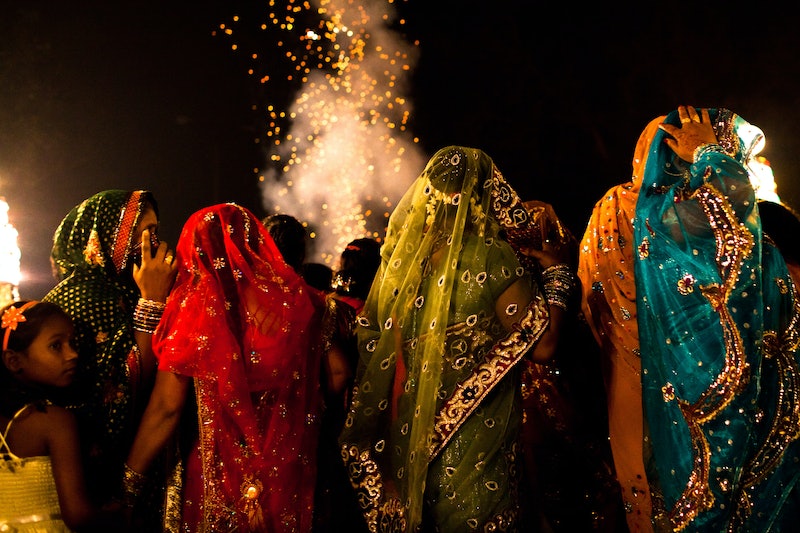 It’s not unusual for middle-class parents in India to post marriage ads for their eligible children — a little like your mom setting up an OK Cupid profile in your name then screening all your matches — but one young Indian woman has added a twist to the usual narrative: unimpressed with her parents' attempt, she made her own marriage ad. “[The first advertisement] was so not me,” Indhuja Pillai, a 24-year old techie from Bangalore, told The Times of India. “I'm startup material, and hate multinationals… I was annoyed the way the site made me look like some woman desperate to get married.”

The matrimonial website she created in response — an ironic, irreverent satire of the marriage ad custom itself and the society that produces such a system — started trending in mid-February. Three days ago, it had 200,000 page views; now, that number is up by a further 150,000. With 11,000 Facebook likes and 1000 comments and responses, it’s unsurprising that gentleman have begun to take the bait. Yesterday, the BBC reported that Indhuja had around 40 suitors.

So who is the alluring Indhuja? Suffice to say I would date her myself, were I that way inclined.

OK, maybe that does not suffice. Some extracts, then.

Indhuja’s clearly of the school of thought that believes the "male/female" binary is boring, so her gender is “Tomboy.” Physical statistics are there, as is her current marital status (“married to self”) and her salary (“overabundant for self,” so she’s saving to travel). And, crucially, while her parents listed her as a “software engineer,” which infuriated Indhuja (“This really annoyed me,” she told the BBC. “I am not a software engineer, I work with start-ups and smaller companies”), she describes her occupation as “Catalyst in a startup.” Unsurprising, given Bangalore's status as an IT capital in India.

A non-drinker who hates smoking, Indhuja is anything but boring. “An eggitarian, not a foodie,” she’ll be your badminton doubles partner while wearing “dorky” glasses. “Detests masala and drama,” she writes, “Definitely not marriage material.” The website’s banner reads, “People want to survive, I want to live.”

Having dealt with herself, Indhuja sketches a picture of her dream man, “preferably bearded, who is passionate about seeing the world.” She’d ideally like him to be able to converse “for at least 30 minutes,” and awards extra points for “the one who hates kids.”

The fine print at the bottom advises, “If you think you qualify, I recommend you re-think. If you are sure, I suggest you show this website to your parents. If you're still sure, try imagining a life with someone like me.” She signs off with an invitation to potential suitors to tweet or Facebook her.

If this idiosyncratic lonely-hearts profile (a term Indhuja would no doubt hate) looks relatively normal to your dating-app-jaded eyes, cast your mind to Indhuja's context and the "normal" Indian marriage ad. Most local papers carry a matrimonial section, densely packed with text. I recall being astounded by my first glimpse of such a thing, from the unforgiving seat of a rickety local bus on a pothole-strewn rural Maharashtrian road. Glancing over at a newspaper page being thumbed by the gentleman in the seat in front, I caught sight of an ad for a wife, preferably “fair and lovely.”

Such ads are ubiquitous — have a scroll through The Hindu’s extensive selection. Mostly, the ads are for brides (I struggled to find the same paper’s bridegrooms section and have concluded that there wasn’t one), and they all follow a pretty standard format: location, age, height, caste (or “caste no bar”), education, occupation. Occasional flourishes are brief and to the point: “Greencard Holder seeks girl in USA,” “seeks Working Girl affluent family from Tamil/ Kannada/ Telugu,” “seeks fair, tall, good looking,” “secular lifestyle.”

In the 90s, the marriage-ad handler for the Times of India media group told the BBC that — in a society where many marriages are arranged — most parents advertise only as a “last resort.” It was this whiff of desperation that seems to have irritated the independent Indhuja, as well it might. Her parent’s initial ad began with a first person introduction, then quickly switched to third person: “We are a Tamil family looking for a good groom for our only child, our daughter.” The ad stripped Indhuja’s agency, leaving her just another woman in need of a man. “I don't mind my parents searching for a groom,” she told BBC. “This is very common in India. But I want the right details to be given. It's fine as long as people know who you really are."

Her ad wrestles back control and subverts the status quo in what could be seen as fairly revolutionary style. We could just simplify and cast Indhuja as the epitome of the Indian Manic Pixie Dream Girl (should we wish to use a problematic term that has been disavowed even by its creator), but her ingenious ad goes beyond quirk into more contested territory. In a context where most marriage ads place emphasis on looks, caste, horoscope and income, Indhuja stands alone. Her requirements for a potential husband do not mention money and skate quickly over looks. There is no caste or religion, no mention of what sort of family he should come from (in fact, it’s preferable if he “is NOT a family guy”).

She also intentionally undermines many of the stereotypes of femininity and wifely clichés that abound in matrimonial ads searching for brides. “Won’t grow long hair, ever,” she writes — a statement that is far more radical in the Indian context than it may seem. “NOT a womanly woman,” she goes on, nor is she “a spendthrift or a shopaholic.” Perhaps one of the most interesting aspects of the ad is the fluidity of Indhuja’s approach: she is neither this nor that, she refuses to be simply categorized, she will not be ignored, and she insists on asserting her agency.

Compare this approach and the portrait Indhuja paints of herself to the usual ads of her male counterparts: consider the tall, “smart, handsome” 38-year-old “innocent divorcee” who wants a “Loving, Homemaker, Veg Brahmin/Nair Bride with cooking skills.” If that’s not clear enough, he drills the point home: “Independent women pls excuse.” Another man (seemingly hypocritically) desires an “unmarried Gud looking &educated bride.” Seen in this light, Indhuja is ripping the marriage ad tradition up by the roots and critiquing the Indian female ideal while she’s at it.

Needless to say, there are those who are unimpressed. The Indian Express reports that some women have criticized Indhuja for “behaving like a kid,” and “being immature.” The kickback seems fairly weak, and pales in comparison to the positive response. The suitors have come flocking to Indhuja’s virtual door, from outside of India in some cases. But Indhuja admits that it’s the response of other Indian women that has really inspired her. “You read my mind,” one wrote on Facebook, while another (meeker) spirit confessed, “I want to do the same thing but my parents won’t allow.”

A recent survey conducted by a Bangalore-based NGO found that fifty-one percent of college students believed women should focus on housework and child raising. In such an atmosphere, it’s delicious to know that, despite her wildly successful bid for a betrothed, Indhuja doesn’t actually even want to settle down just yet. According to The Indian Express, she’d rather travel across India and see the world before thinking further about marriage. Badass.