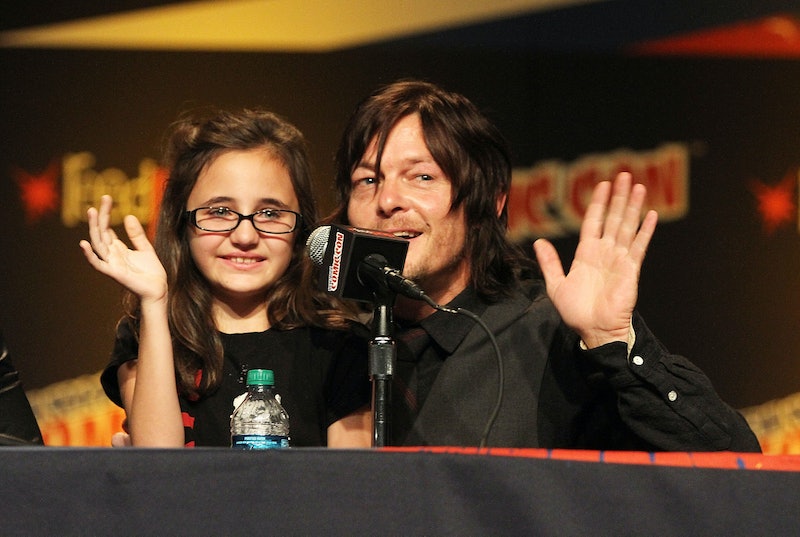 Not only does The Walking Deaddeliver spoilers, footage, casting, and some seriously on-point banter for fans who come to their many, many comic con panels, they're committed to showing their fans just how much they love them — like really, truly love them. In fact, during The Walking Dead Season 4 panel at New York Comic Con, Norman Reedus, Andrew Lincoln, Lauren Cohan, and Co. made more than a few fans' wishes come true.

While most fans were just happy to get into the presentation — which sat 3,000 ecstatic people while about 2,000 more waited outside the auditorium, watching on satellite screens — where they could see their favorite actors in the flesh, a few folks got the all-star treatment. Sure, the cast couldn't give everyone a personalized hug or a special moment, but you get the feeling that if they could have, they would have.

When one tiny fan (pictured above, sitting on Reedus' lap during the panel) used her turn to ask a fan question to request a hug from the cast, every single actor obliged, because while they could all gut a zombie in three seconds, they're as sweet as they come. It was Reedus, however, that made the little girl's year when he asked her to stay on stage with him during the panel as his special helper. Do you hear that? That's the sound of a thousand grown women's hearts breaking over not being the little lady in this picture.

2. ANYTHING FOR A FAN

Reedus just kept on giving throughout the panel and eventually, one fan asked for something sweet and heartbreaking: His fiance, who's terminally ill, has been a fan of Reedus since Boondock Saints. The heartbroken man asked Reedus if he'd give his ailing fiance a phone call after the panel and of course, Reedus took down the number. Go ahead and doubt Reedus' resolve, but this is the guy who loves his fans so much he came in throwing out toy squirrels and letting young fans hang out with him onstage. That phone call most definitely happened after the panel, and it was undoubtedly beautiful.

3. ANYTHING FOR A FAN, PART 2: EVEN WEIRD STUFF

The man who just couldn't stop giving even acquiesced to one woman's request to take home his water bottle. Without missing a beat, or making the woman feel strange for requesting a plastic vessel carrying his finger prints and backwash, Reedus handed over the Dasani bottle with a smile. No matter how strange his fans get, Reedus seems as delighted as ever to have them around.

4. ANDREW LINCOLN DEFINITELY WANTS TO SEE YOUR TATTOO OF HIS FACE

Lincoln got in on the fan-loving action when one man asked the sometimes-sheriff if he'd "look at my tattoo of Rick Grimes." Now, that sounds like a seedy pickup line, but Lincoln hopped off the stage, shouting, "Let me look at your leg." (The man's tattoo was actually on his arm, but at last year's NYCC, Lincoln met a woman who had his face tattooed on her leg so it makes sense that he'd assume.) And what a trooper that handsome Englishman is: two years in a row, it's been his duty to look at inky representations of his own face in front of a crowd of 3,000 people and two years in a row, he'd obliged with a smile and a spring in his step.

5. THE ROMANTIC SHOWDOWN IN LOT C

Finally, one audacious little boy took on Stephen Yeun for the love of Maggie and her beautiful real life counterpart Lauren Cohan. After professing that Cohan is one of the most beautiful women he's ever seen while Yeun pretended to get territorial — "Meet me in Lot C after the panel" he teased — the little charmer dropped the ultimate line. "Since Maggie is such a badass, do you think she still needs Glenn around to protect her anymore?" (In other words: skedaddle, lover boy, it's my turn.) While Yeun faux-fumed, removing his jacket and throwing it across the stage, Cohan giggled and sweetly played along. "Well, we'll have to see what happens in Lot C," she cooed. If that moment didn't make that boy's year, nothing ever could.

Now, I wonder how many times I would have to ask this cast (in a public place, full of strangers and Yvette-Nicole Brown) to be my best friends, because they just might be the coolest people ever.